The Kennebec Arsenal was built after the War of 1812 to build and store weapons and ammunition to defend against British Canada and in response to ongoing border disagreements with neighboring New Brunswick.   It was manned by soldiers until 1901 and then was turned over to the State of Maine as an expansion of the adjacent Maine State Hospital. It is now listed as a National Historic Landmark and is known to be the best surviving example of an early nineteenth century military complex of this type.

Who Built it and Why

The War of 1812 (1812-1814) was very costly for the United States – far costlier than the Revolutionary War.  In addition to the loss of 15,000 men, the U.S. spent almost 2 billion (in 2020) dollars on the efforts.  The war ended with the signing of the Treaty of Ghent and the U.S. recognized that its defenses needed not only to be rebuilt, but substantially fortified – especially along inland waterways and along the coasts.  So In 1816, Congress, which was low on funds,  approved the building of an ambitious “third system” consisting of forts, armories and arsenals. The new forts were larger than their predecessors and were built primarily with stone to address the weaknesses of the previous forts.  Many forts took decades to build and some were never completed.  By 1867, 42 forts had been built including 5 in Maine: Fort Knox (Prospect), Fort Popham (Phippsburg), and Fort Gorges, Fort Scammel and Fort Preble (all 3 in Portland).

In addition to these stone forts, stone armories and arsenals were also built.  The arsenals were constructed to build and safely store munitions which could then be moved to where troops would need them in case of future combat.

During the War, Maine was still a part of Massachusetts (it didn’t become a state until 1820).  British forces attacked up and down the Maine coast, and Massachusetts did little to help.

This situation was made murkier because the Treaty of Paris that ended the Revolutionary War had not clearly defined the northern border of Maine.

After the war ended, Canada was still a province of the United Kingdom and tensions were high in northern Maine.  Settlers from both sides were moving into the disputed territory (primarily for timber), especially into what is now Aroostook County and along the St. John River. The Army was concerned that Maine could easily become caught up in a new war with England and could easily be isolated.

At the time, the closest military depot was the Watertown Arsenal in Massachusetts, more than 200 miles to the south. The only way to move arms and ammunition efficiently at the time was over water and the War of 1812 had shown that England could easily cutoff such movement using their substantial fleet. Northern New England was vulnerable. While searching for possible northern locations, George Bomford, the 2nd Chief of Ordinance for the Army, identified little Augusta as an ideal location for a new arsenal.

Construction and Active Use

President John Quincy Adams signed a bill in 1827 authorizing the construction of the federal arsenal in Augusta.  Construction began in 1828 and continued over 10 years.

The first buildings constructed were the commandant’s and officer quarters, barracks, stables, a carriage shop, and the main armory.  Most of the eight major buildings were constructed of Maine granite in Greek Revival style.  A retaining wall and wharf were constructed at the river’s edge for unloading supplies and a perimeter fence of granite and iron surrounded the property.

Tensions remained high in northern Maine, culminating in the Aroostook War in 1839 – which was a war in name only as no blood was spilled. You can read about that story over here. Ultimately, the situation quieted down when the Webster-Ashburton Treaty was signed with Great Britain in 1842 and the northern border of Maine was finally settled.

Over the latter part of the century, the arsenal remained active and manufactured weapons for both the Mexican–American War and the American Civil War. But because it was so remote, and because other army facilities were being used to construct weapons, it was only being used for storage and its military and strategic importance steadily declined as the 20th century approached.

Transfer to the Maine State Hospital

In 1836, construction of the Maine Insane Hospital was begun on a bluff overlooking the Kennebec River directly across from the State House.  Eventually, a sprawling complex of stone and brick buildings was constructed and housed a large number of patients.  It was renamed the Augusta Mental Health Institute and was in continuous use until 2004 when the adjacent Riverview Psychiatric Center opened.

In 1901, the Arsenal was formally abandoned by the Army.

Then on April 13, 1905, President Theodore Roosevelt signed a bill authorizing the transfer of the arsenal to the State of Maine for use by the Maine Insane Hospital.

All of the wooden structures at the Arsenal were torn down, leaving only the stone structures.  Patients were moved into the Arsenal buildings in 1906 and doctors and support staff moved into the barracks and houses. To accommodate the very different needs of the hospital, the interior of the Arsenal Building was completely gutted. New concrete floors with hardwood on top were added and new iron staircases were constructed. A dining room and kitchen were built in the basement. The first floor became a sitting room for the patients with four small rooms for attendants. The second and third floors held sleeping rooms for patients and the attic contained apartments for night attendants.

The building now known as the “Old Max” was constructed higher on the hill between 1907 and 1909 to be the Maximum Security Building for the Asylum.  It housed the patients deemed to be too dangerous for the main hospital but too sick for a regular prison.  Old Max was used as a residential treatment facility through the 1970s, after which it was renovated by the State of Maine to provide office space for the Department of Human Services.

The last patients were moved out of the Kennebec Arsenal and the facility was closed in 2004 when the State Hospital was closed.  Then in 2007, the Arsenal property was sold to Tom Neimann, a private developer.  Two parcels totaling 17.4 acres and containing eight buildings were sold to Main Street I/Niemann Capital for $750,000.

Conditions of the sale included a covenant that required the new owner “to preserve, maintain, and repair the property in order to retain its value.”

Instead, the property was mostly neglected and vandals broke windows, stole copper wiring and pipe, and the deterioration of the properties and roofs caused significant water damage.

In 2012, the developer was given a deadline to secure and improve the property.  Little was done and the State was forced to sue in 2013 to return ownership.  The developer claimed that the poor economy hindered any efforts.  Since then, the developer has prevented foreclosure by making occasional repairs and making late payments for overdue utility fees.

One positive sign is that the Maine School of Masonry, in concert with the Maine Historic Preservation Commission, is doing mortar work on the property for free.  Students are using hand tools to insert new, but period-correct, mortar into the two-foot thick granite block walls to try to prevent water from seeping through the gaps and previous (incorrect) repairs.  They’re doing similar work at Fort Knox in Prospect.  The founder of the school who oversees the students stated that the work at the Arsenal could keep them busy for years.

As of December 2020, posted signs dot the property and a weathered sign greets visitors at the gate reading “National historic landmark offers vibrant riverfront campus for boutique hotel, condos, restaurant, retain and office space” along with a phone number to contact Neimann Capital. 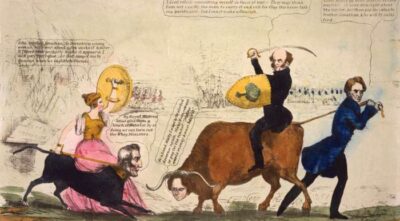 The Pork and Beans War

The Arsenal is hard to miss next to the Kennebec River in Augusta.  Take Cony Street from the Cony rotary and go Left on Arsenal Street.  The State Hospital is just down the road on the hill. 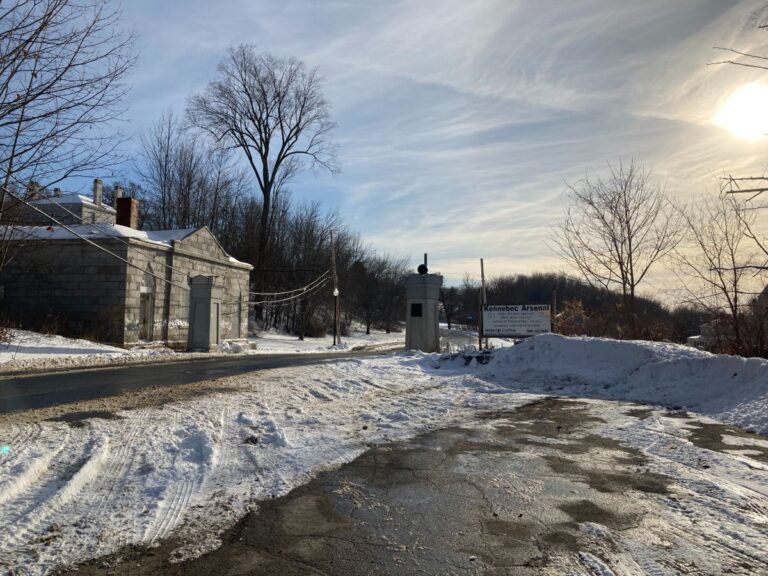 Entrance gate to the Kennebec Arsenal 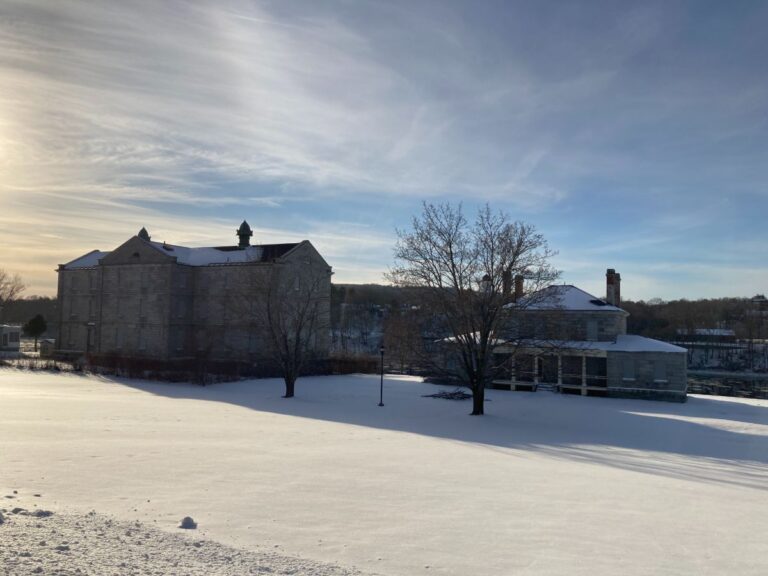 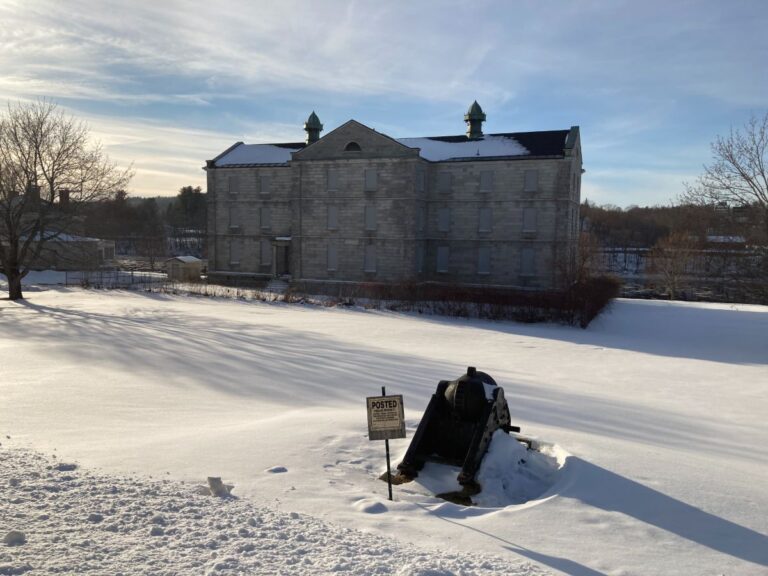 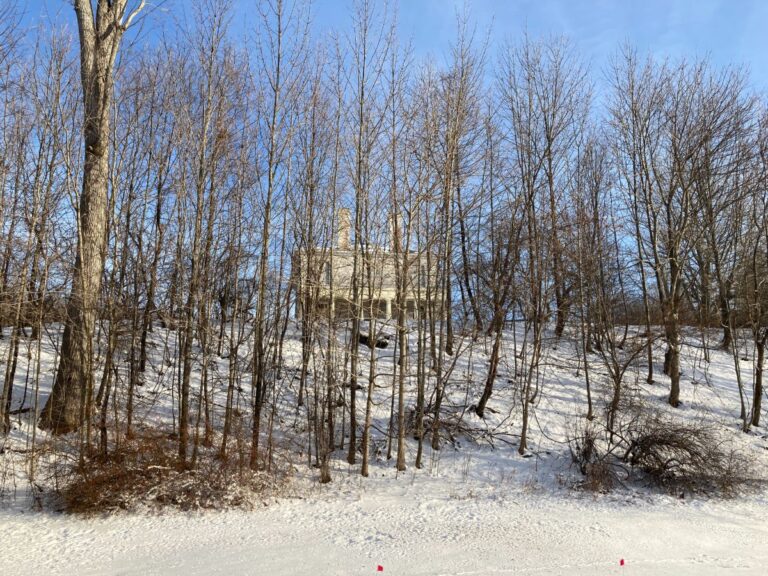 The commandant's house through the woods 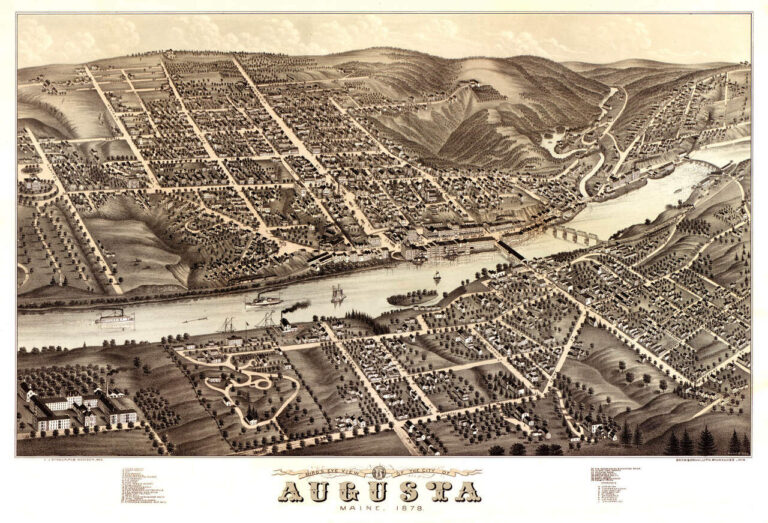 Aerial map of Augusta, 1878, showing the Arsenal and hospital along the river 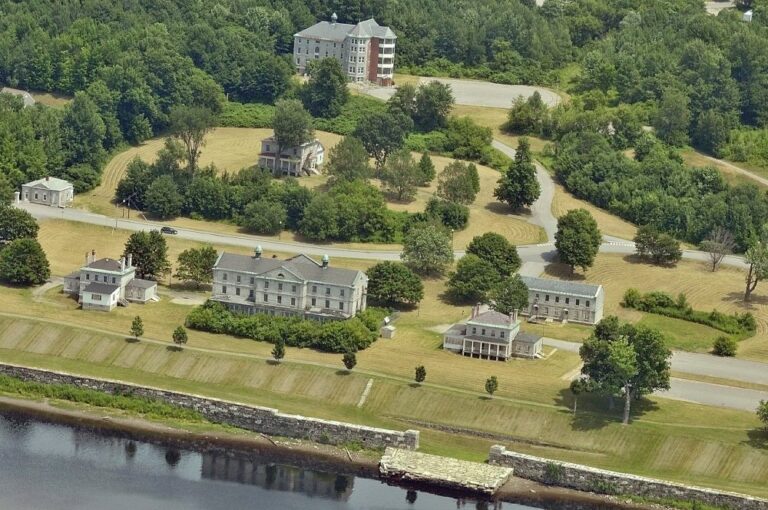 Aerial view of the Arsenal showing the retaining wall and wharf by the river. "Old Max" is visible at the top. 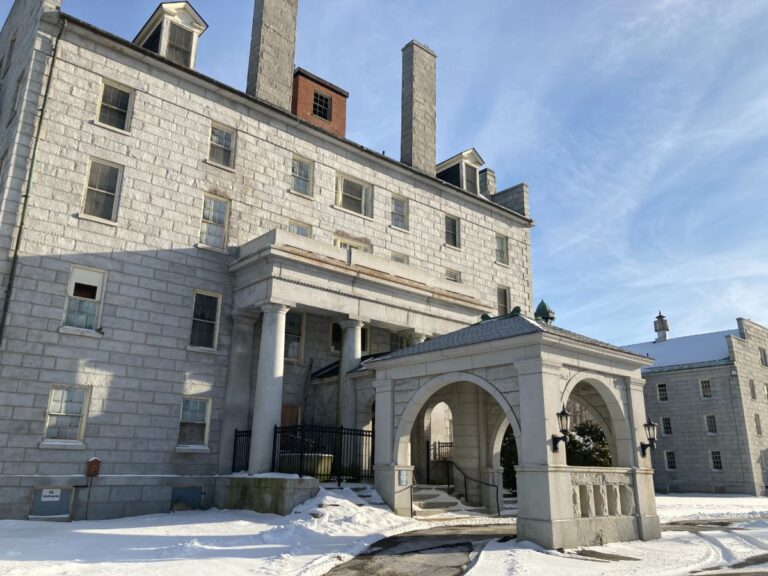 Entrance to the main building at the State Hospital 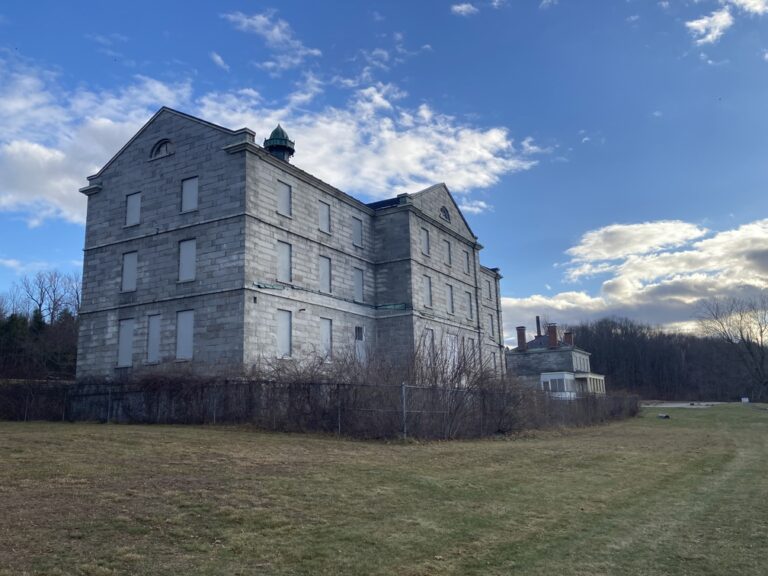 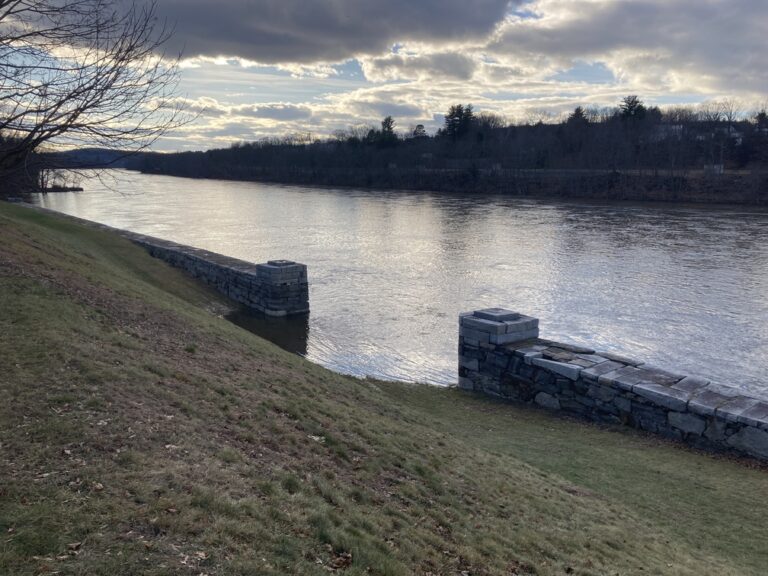 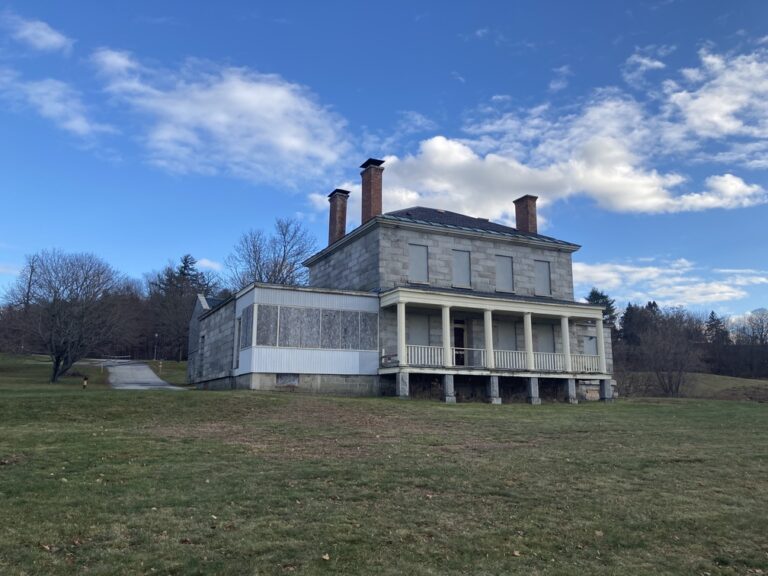 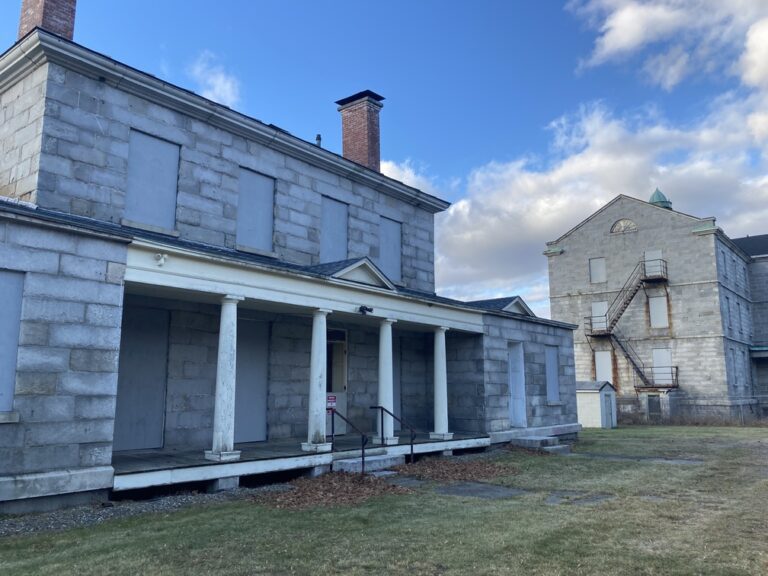 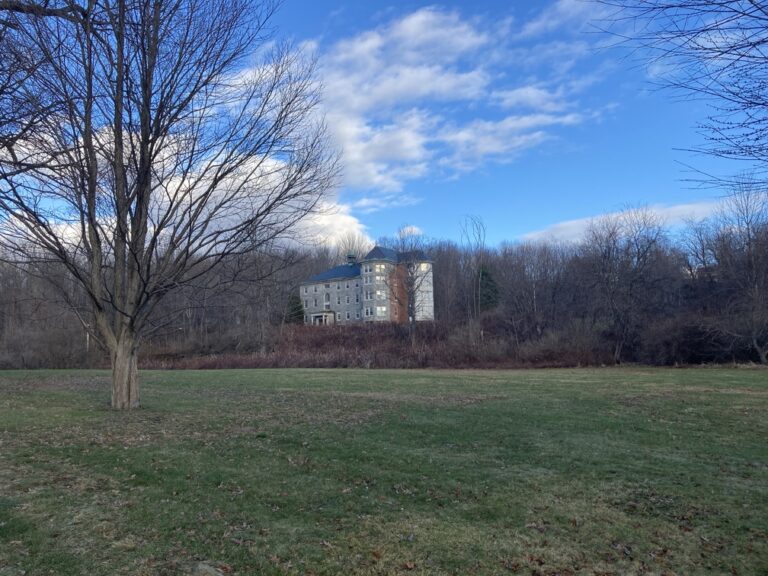 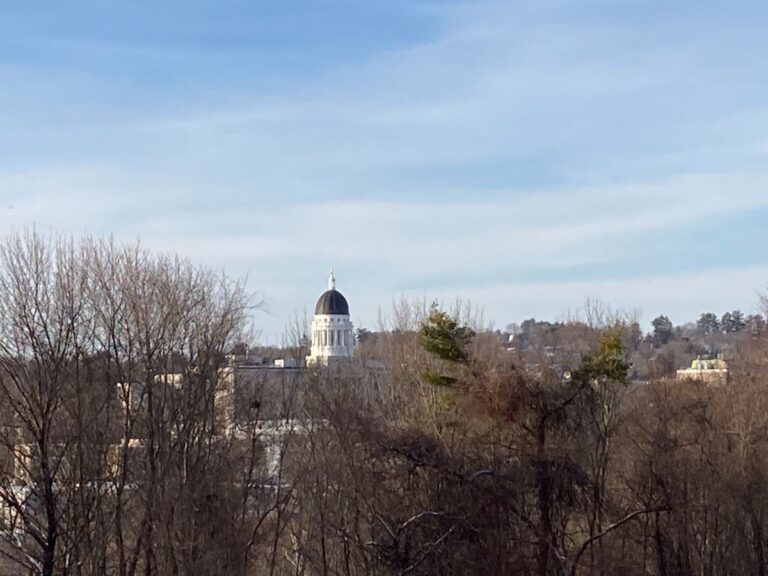 The State House visible across the river 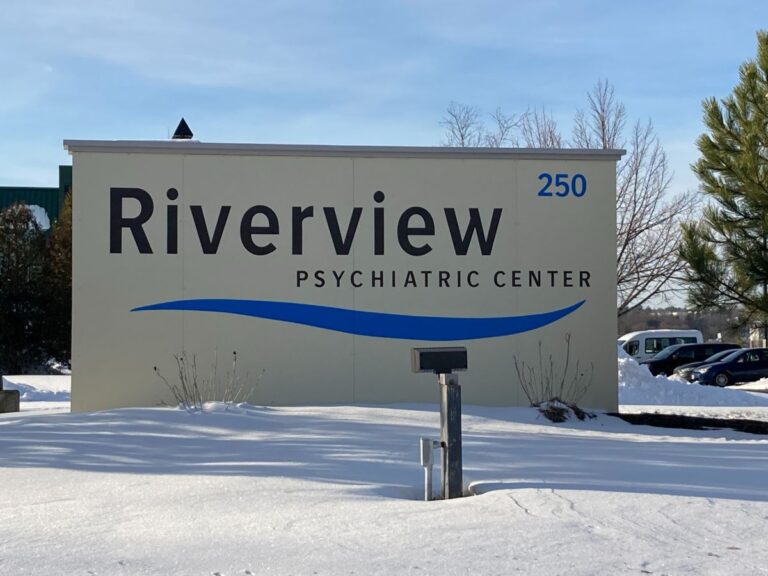 The Pork and Beans War