The Old German Meeting House is an historic Lutheran church built in 1772 in Waldoboro. It was built by – and for – the immigrant German community and is one of the oldest churches in Maine. The church served as the center of the Waldoboro German community for many years functioning as both a place of worship and as a community meeting house. It hasn’t been an active church since the 1800s and is now maintained as a memorial by the German Protestant Society. The church and surrounding cemetery were listed on the National Register of Historic Places in 1970.

The church is a two-story, yellow-painted wooden structure, 36 feet by 45 feet and 30 feet high. It sits on a simple stone foundation (no cellar). The first floor windows have 24 panes while the top windows have 20. The simple, unadorned interior, common to meetinghouses of the time, features a wine-shaped raised pulpit in the front, three rows of box pews with doors, and an organ. The second story has a gallery on three sides. The plastered walls feature exposed beams and the entire structure is heated by a wood stove and has never had electric service. Surrounding the church are gravestones on 24 acres dating back to the 1700s.

The earliest settlers to the area were a few Germans who came over around 1740. About 1,500 more Germans subsequently travelled to what eventually became Waldoboro in a series of of four voyages. They were actively recruited by Army Officer/Politician/Land Speculator General Samuel Waldo and later by his son. Waldo controlled 576,000 acres of land through a land patent and sought hearty, willing folks to turn the untamed land into a town which eventually bore his name. READ ABOUT THIS OVER HERE.

A Series of Churches

When the Germans arrived, they needed to build not just homes, but a church. So they first built a small, boxy spruce and hemlock log-cabin structure at Meeting House Cove in 1763. It was a simple, unfinished church with rough-hewn benches that must not have been comfortable for the flock and sheepskin for windows. They outgrew it and built a larger church across the Medomak River up the Eastern shore a bit in 1772.

Ownership and control over the land around Waldoboro was disputed in the late 1700s. The Waldo Patent faced a competing patent, the “Pemaquid Patent” which claimed that the land on the East of the river belonged to them. The church was owned at the time by 32 German Lutherans and they decided that they needed to move the church to the west side of the river to land that had been set aside by Waldo for a church or a school.

So during the winter of 1794, the Germans completely dismantled the church and moved it.

With the river frozen over, they transferred the church piece by piece over the ice using sleds.

They then hauled it up the steep slope. In the spring of 1795, they reassembled it in its current location. There may already have been graves at the site before the church was reassembled.

When it was first constructed, the church was even simpler than it is now. The wooden walls were unpainted and the seating consisted of just rows of seats. It was really just a box with windows and chairs.

Sometime later, the walls were plastered and painted a light grey. The wooden seats were replaced with five foot square pine box pews with swinging doors and the box pews were purchased by families. A “graceful” wine-shaped pulpit was built up front for the pastor. They also added a wood stove for heat and a parlor organ to accompany the services.

While there were various pastors who led services when the church was new, it wasn’t until 1795 when the first regularly ordained minister took over. He had the most impressive name: Reverend Friedrich Augustus Rodolphus Benedictus Ritz (1752-1811) of Germany. He was classically educated and came to the US in 1784. After serving as minister in Pennsylvania, he found his way to Waldoboro where he married Margaret Hahn, was given a farm “25 yards wide,” and ministered until his death.

After Reverend Ritz passed away, the church sent a Captain Charles Miller to Philadelphia to find a replacement. He met the German Reverend Johannes Wilhelm Starman (1773-1854) and asked him to visit Waldoboro. Reverend Starman ventured North and took over in 1812 and became the 2nd (and final) real minister of the church.

The building was the center of the German community everyday, but Sunday was devoted to church services. There was a service in the morning with a break at noon for families to gather in groups for a noon meal. Then everyone went back into the church for an afternoon service. Births, weddings, deaths, and community meetings were all shared in the building.

The parish slowly declined in number. Most sources claim that the church died because the older Germans insisted that all church services be conducted in German while the newer generations were exclusively speaking English. But in Samuel Llewellyn Miller’s “History of the Town of Waldoboro” it says that Reverend Starman tried to adapt to the changing community. After 8 years of strictly German services, he learned English and began offering some shaky services in English. He started with 1 in 4 in English and by the time he died, he was offering 3 out of 4 in English. Likely, part of the reason for the demise was the split within the church between Lutherans and German Reformed. Back home in Germany, Prussian King Fredrick William III had ordered the two churches to combine in 1817. It sounds like the Waldoboro Germans maintained the divide. Reverend Starman valiantly tried to keep the peace and his death in 1854 might have sealed the fate of the church.

The church serves as a memorial to the old German community that once lived in Waldoboro. It is maintained by the German Protestant Society and programs and tours are given by the Historical Society. There is an annual church service on the first Sunday in August conducted in German and English. During the summer, it is open to visitors from 1-4pm on the weekends. New burial plots can be purchased and the church is available for weddings and other events. Donations to the society are always welcome.

Andrew Wyeth painted “Maidenhair” in 1974 which depicted a young “German maiden” wearing a crown of flowers sitting in one of the church pews. As the story goes, “Andy” happened upon the church and thought it would be a perfect setting to realize an idea for a painting he had of a young bride in a church pew. He used various models at first, but settled on a 17 year old girl from Waldoboro named Elaine Benner. Wyeth had met her while driving his ostentatious Stutz Bearcat (Elvis owned one too) through Waldoboro and she was biking home from a lawn mowing job. She sat for him for about a month in the church and at his studio. The painting is in the collections of the Farnsworth Art Museum in Rockland.

Heyer Crosses the Delaware? and then gets Photographed

Conrad Heyer (1749-1856), the son of German immigrants, was buried in the church cemetery and is known for three things – which may or may not be true. 1) he was the first non-immigrant born (to Germans) in Waldoboro 2) He was a Revolutionary War Veteran who “possibly” crossed the Delaware with George Washington and 3) he is probably the earliest born American to be photographed as a daguerreotype. Note that he was not the first person whose picture was taken, it’s just that he was 103 when his photo was taken in 1852 (he lived to be 106) so he had the earliest birth date. Kind of an odd claim. Plus, someone wrote an entire article effectively debunking the “crossing the Delaware” claim. In any case, he is definitely buried behind the church.

Take Route 1 North toward Waldoboro.  Right at the Hannaford onto Kalers Corner Street (State Route 32).  Follow for about a mile (it turns into Bremen Road when you cross Main Street).  Right into the church driveway. 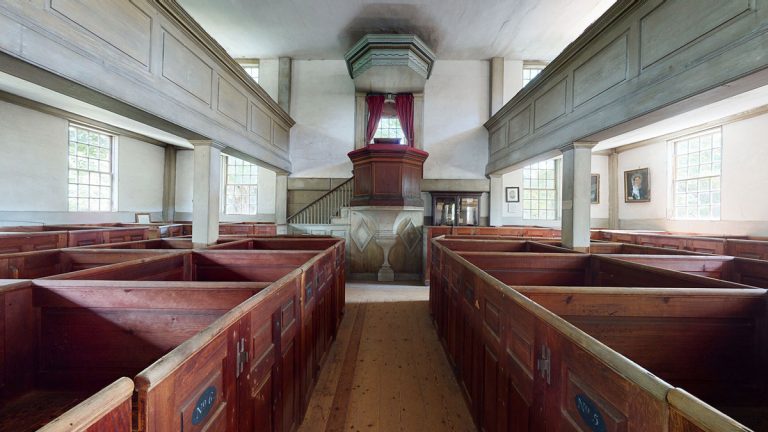 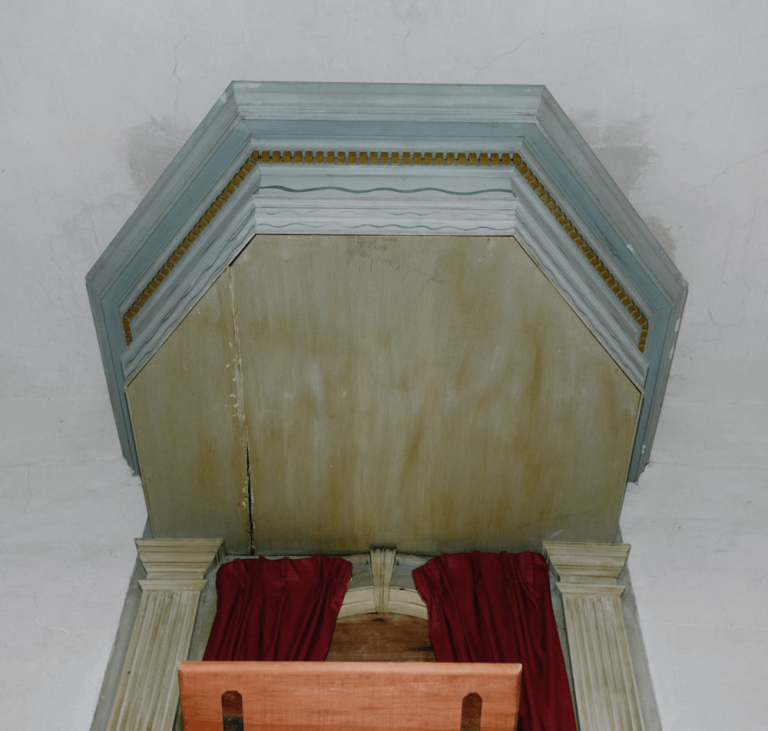 Sound board above the pulpit 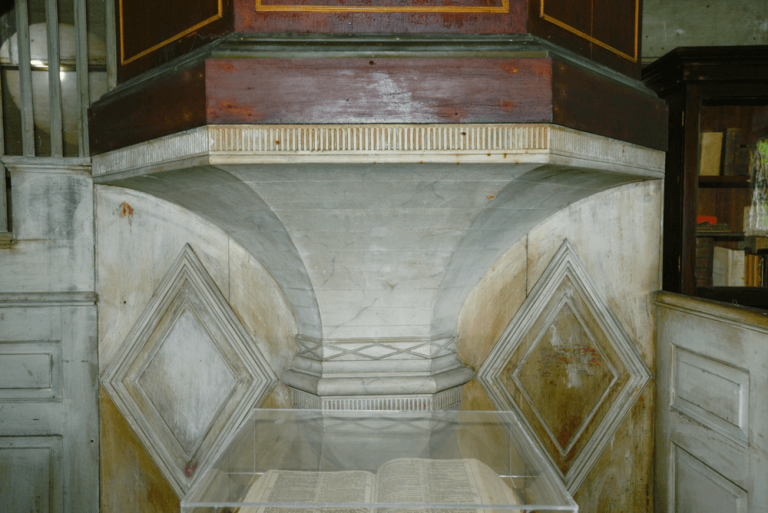 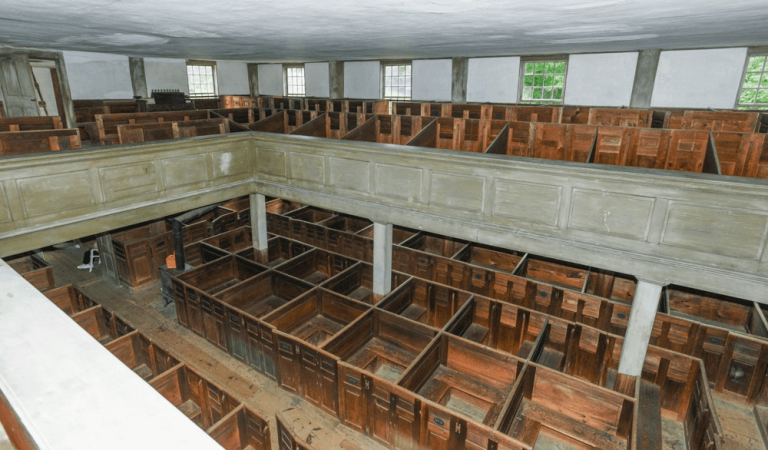 View of pews from gallery 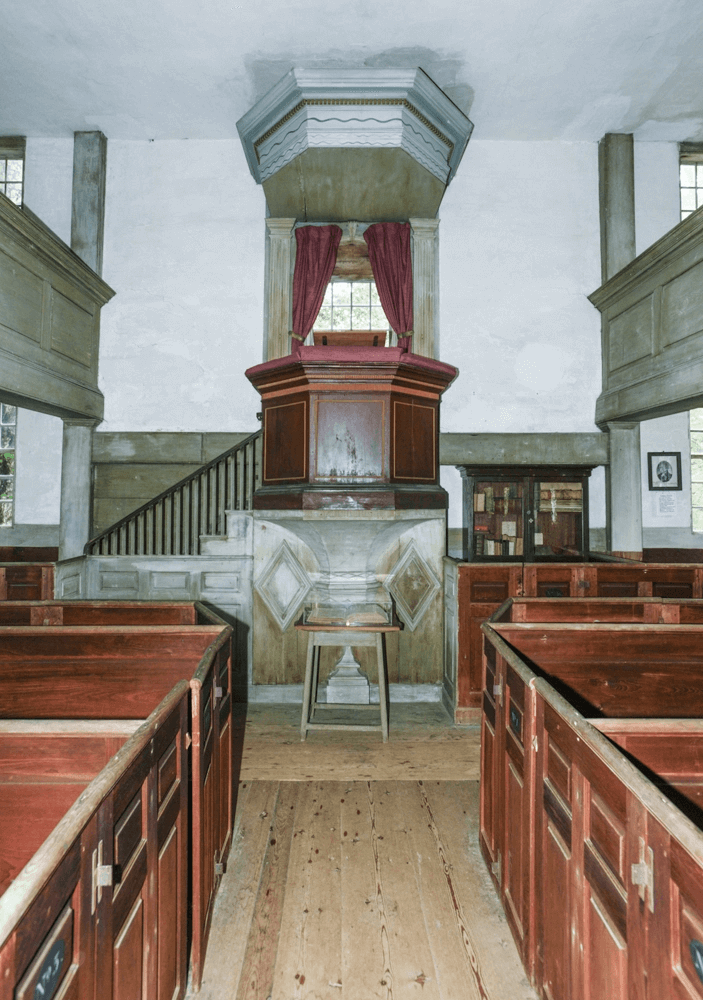 Another view of pulpit 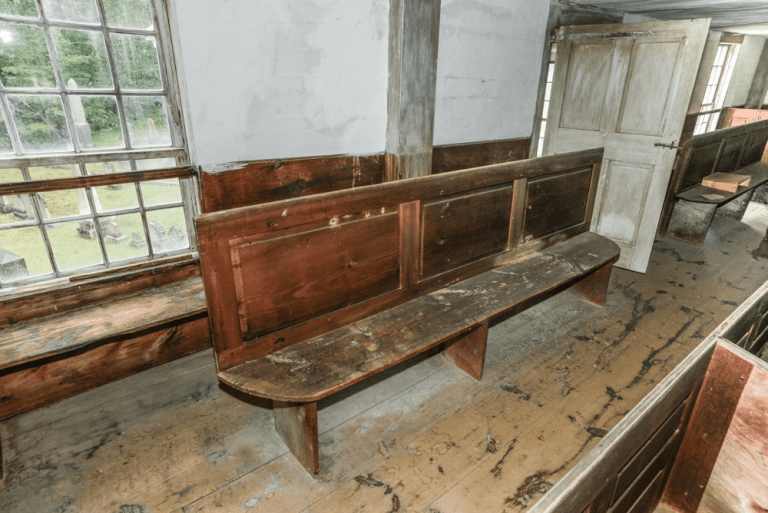 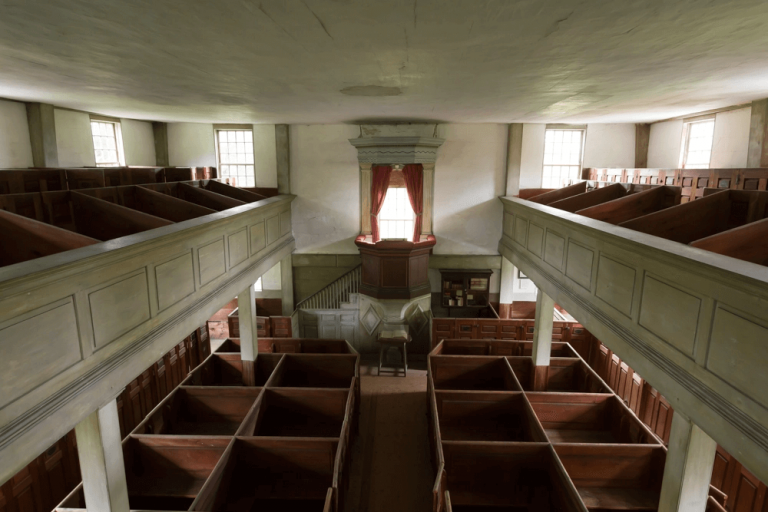 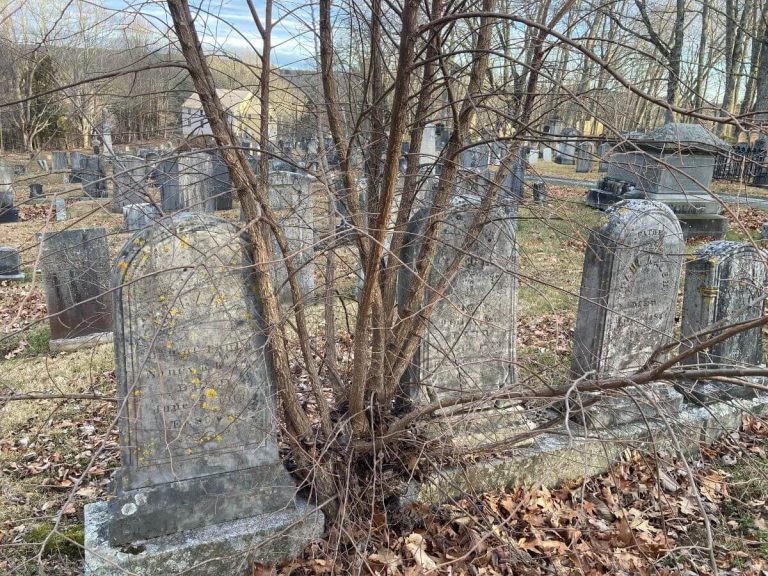 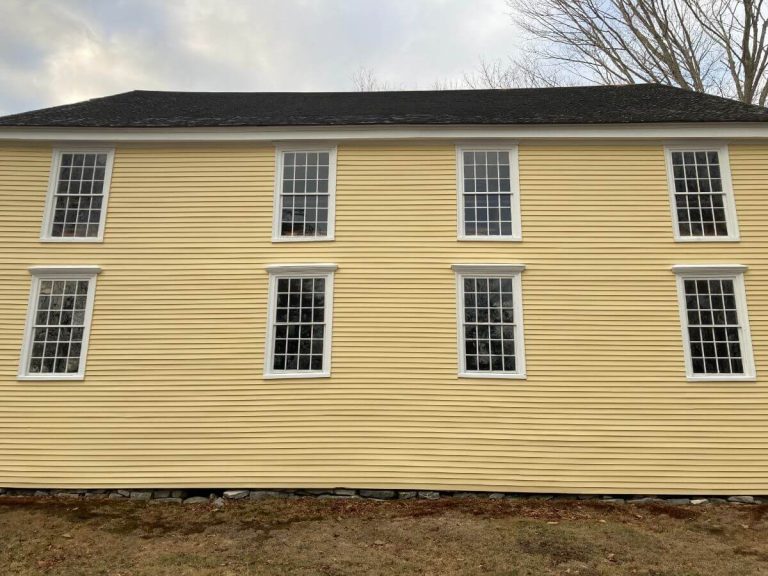 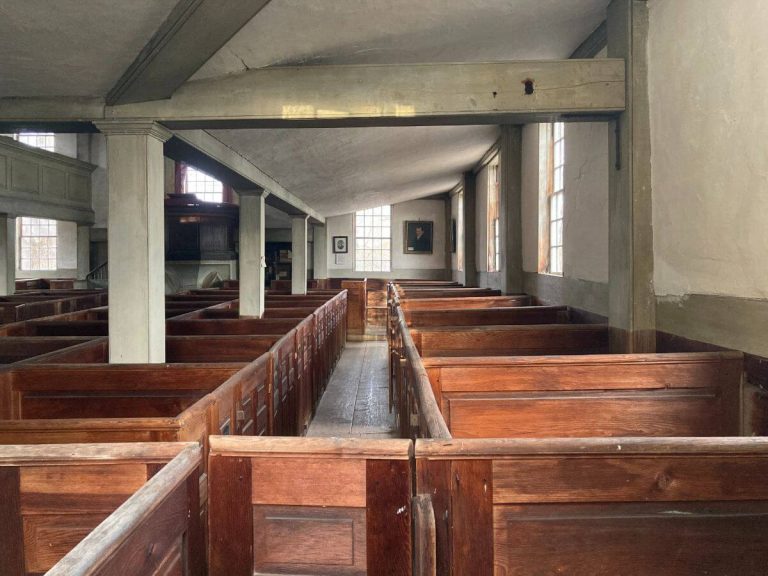 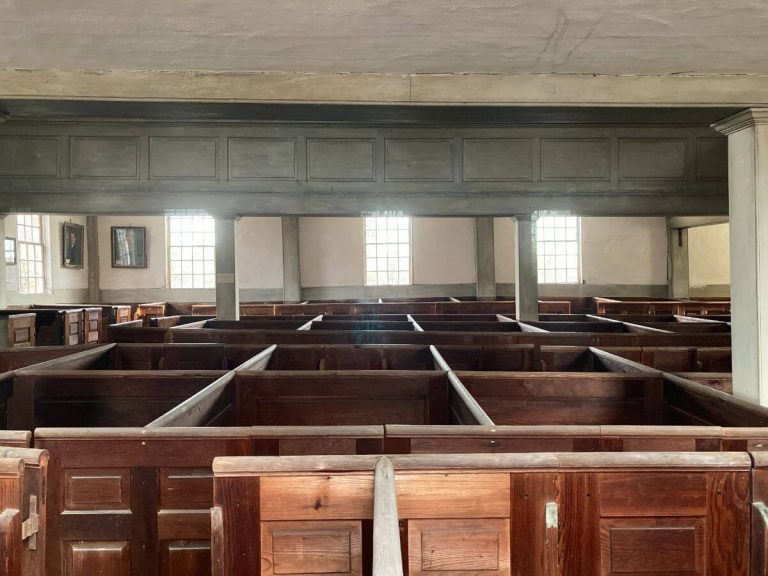 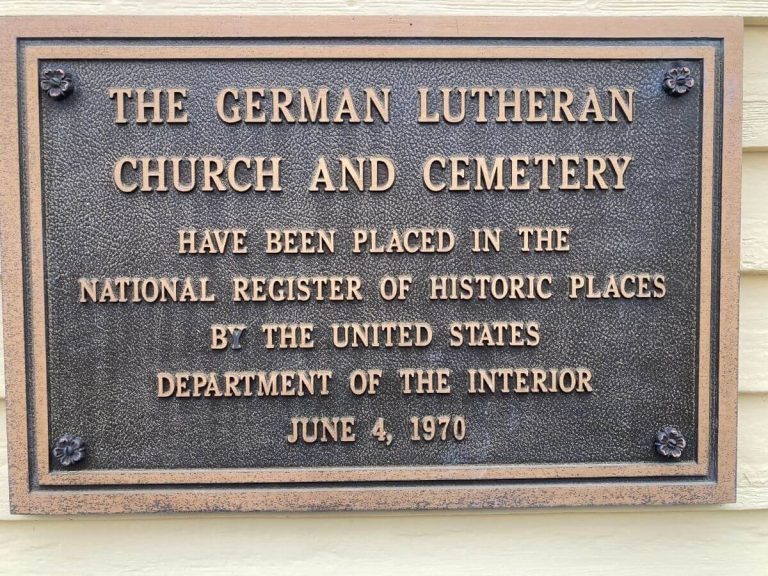 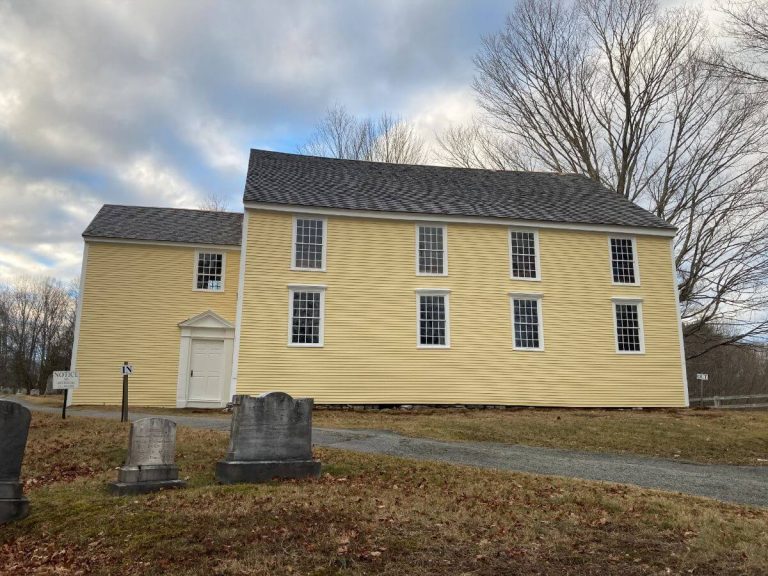 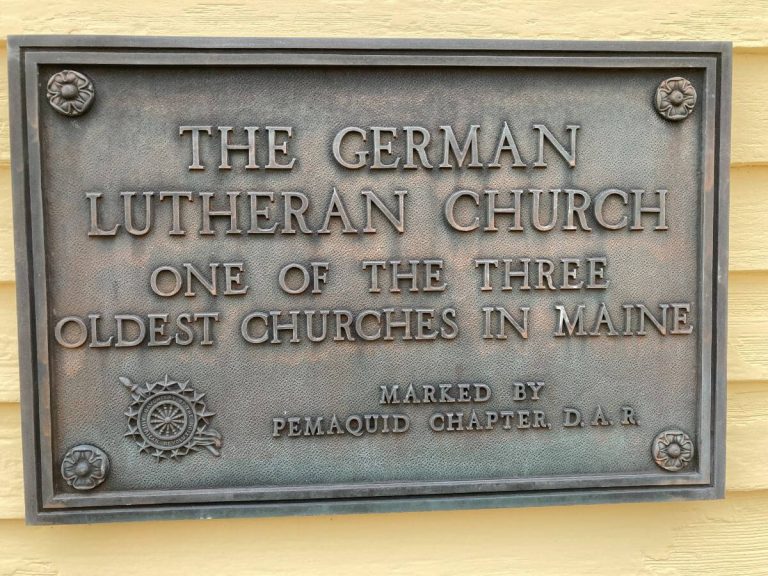 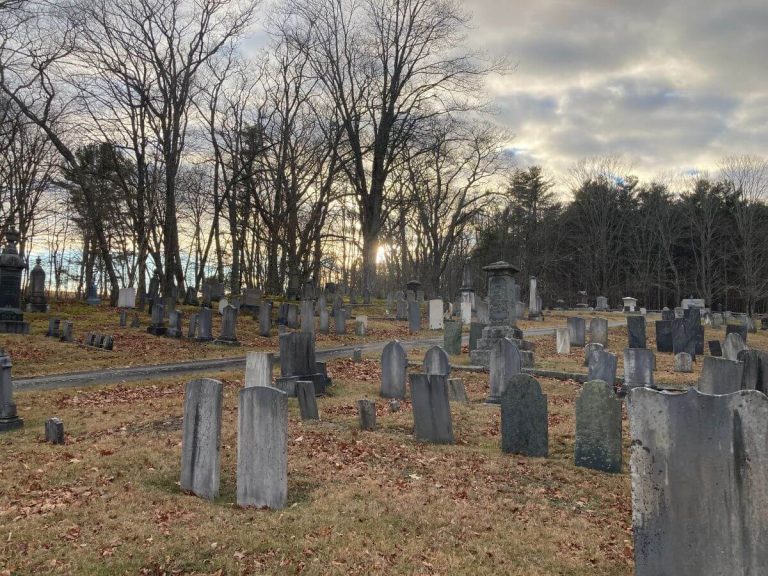 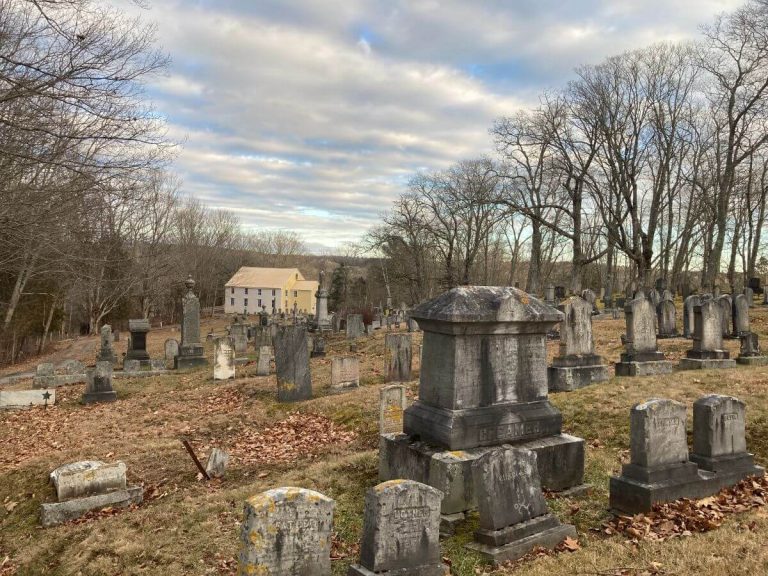 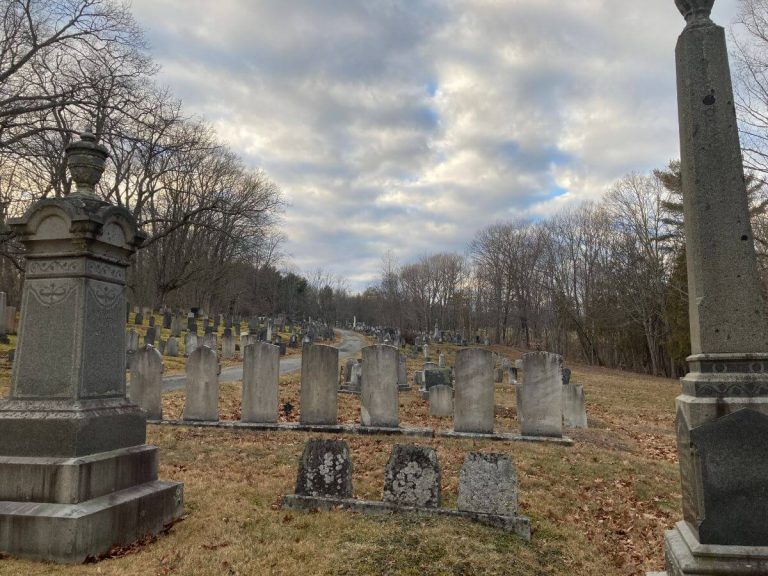 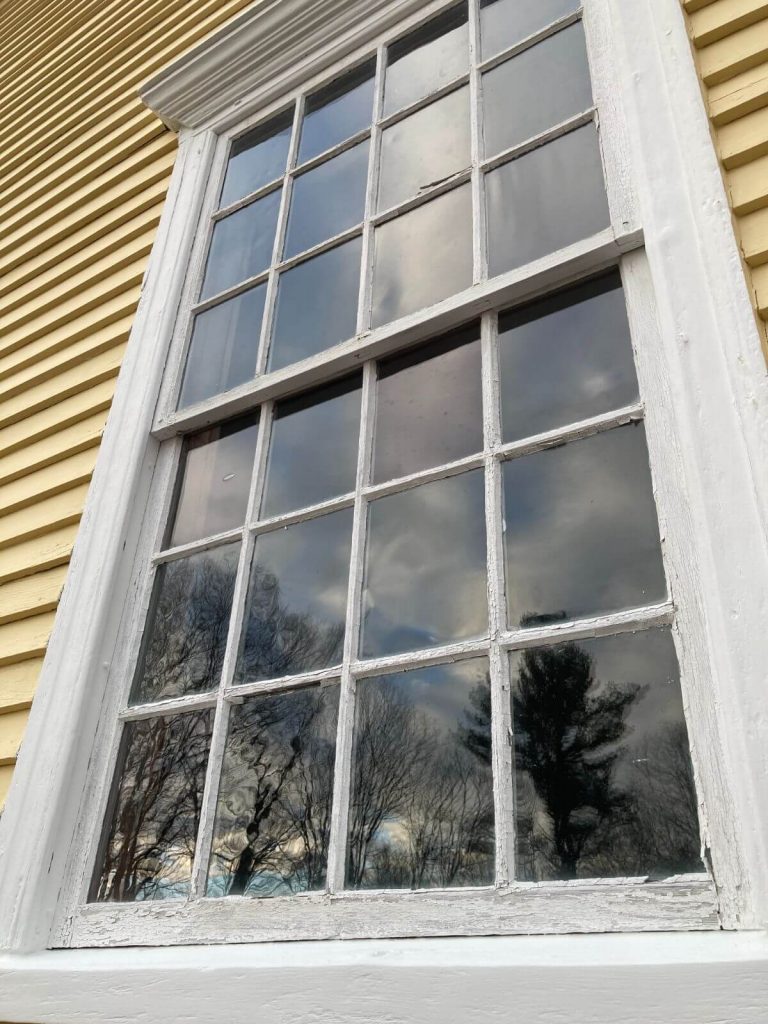 24 panes on the botom 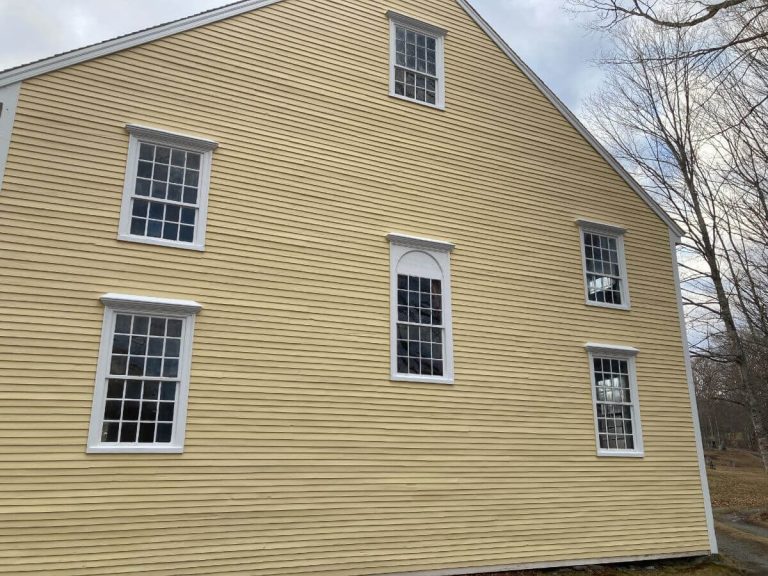 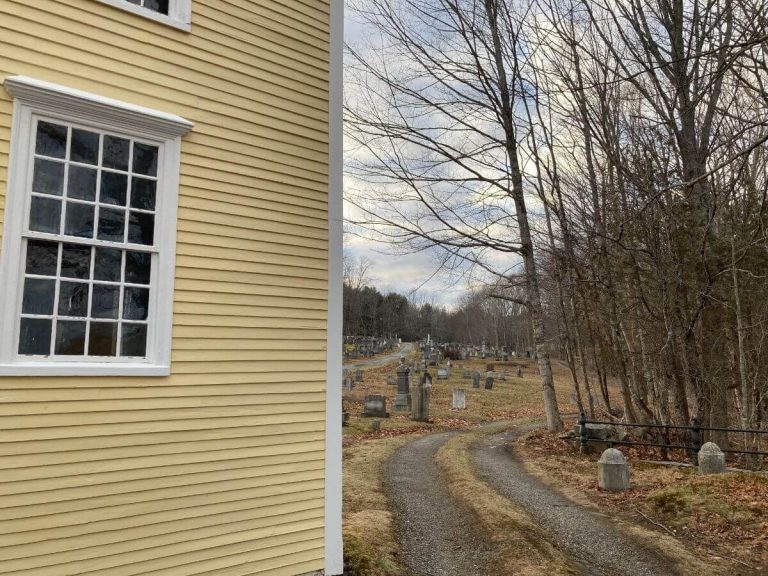 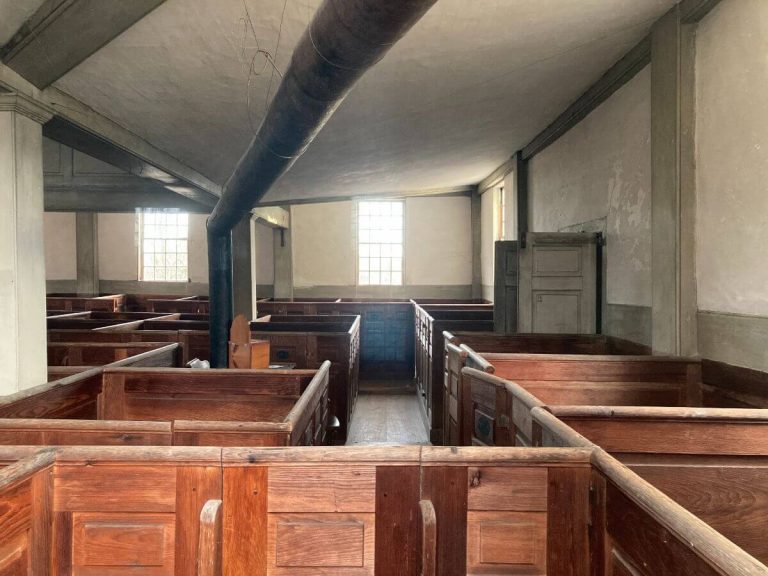 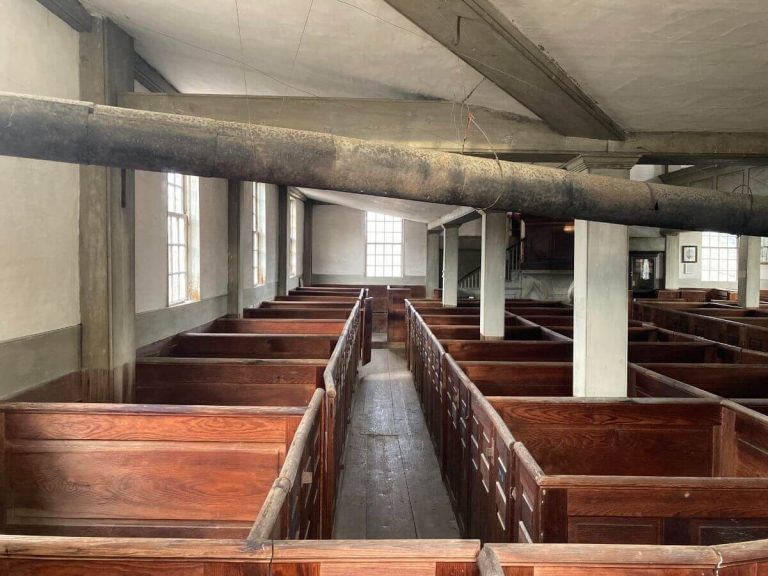 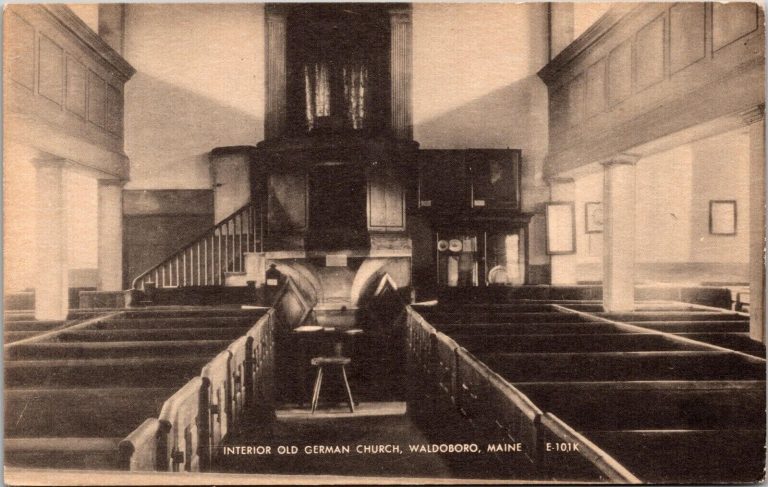 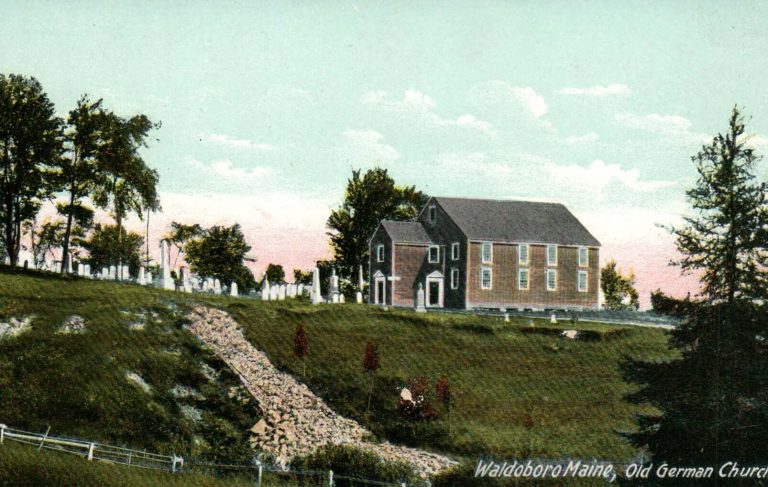 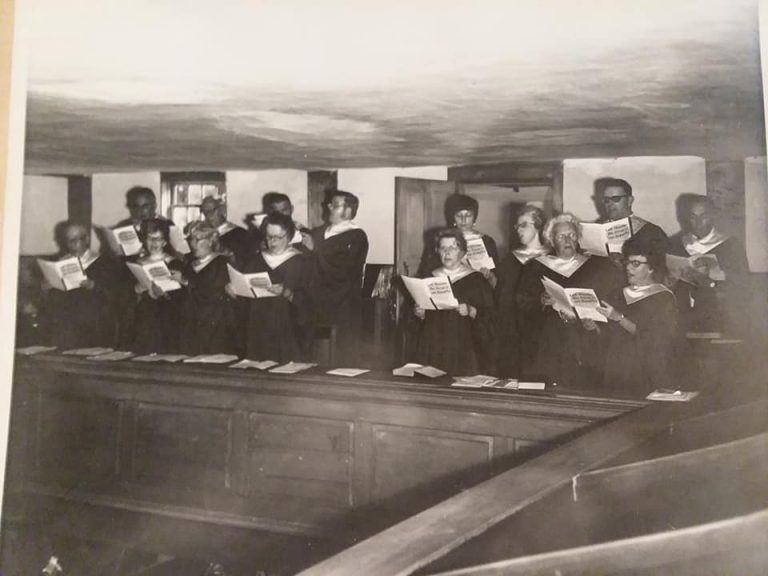 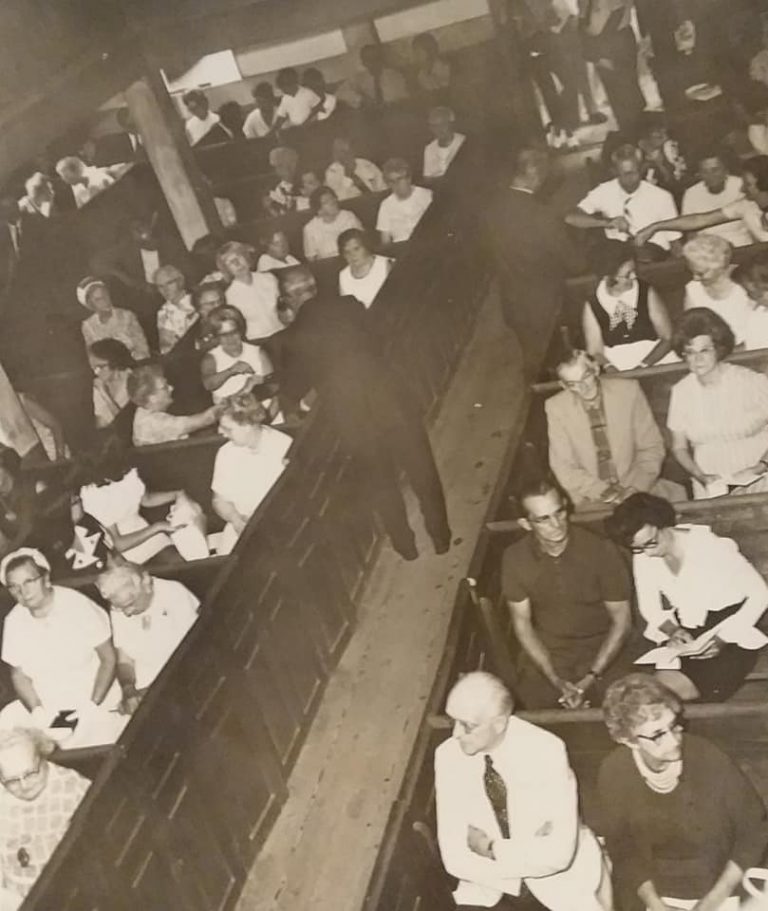