The “Skowhegan Indian” is a very tall wooden sculpture made by Bernard Langlais (1921-1977), a painter and sculptor from Old Town. It was commissioned by the Skowhegan Tourist Hospitality Association in 1966 and, as the sign says, was “dedicated to the Maine Indians, the first people to use these lands in peaceful ways.” It was erected in 1969 in observance of Maine’s 150th anniversary and is a popular stop on the Langlais Art Trail. Supposedly, it is the tallest such structure in the world.

The sculpture is 62 feet high, sits on a 20 foot base, and weighs in at 24,000 pounds. The sculpture is of an Abenaki fisherman, holding a spear in his left hand and a fish trap (a “weir”) in his right. It is made mostly of white pine and its strength comes from two steel I-beams anchored in the concrete base that extend up inside the sculpture to the sculpture’s shoulders. The wooden exterior effectively hangs off the steel structure.

It is easy to drive by the Cumberland Farms in Skowhegan and just see a tall, skinny wooden Indian behind a Cumberland Farms. It probably reminds Mainers of other large roadside attractions like the Paul Bunyan in Bangor or the BFI in Freeport. But the Skowhegan sculpture is a commisioned work of art created to honor the Abenaki who lived in that area before the British and French moved in. The name “Skowhegan” itself translates to “a place to watch” which referred to the waterfalls where Abenakis watched the Kennebec river to spear spawning salmon.

The sculptor, Bernard “Blackie” Langlais, became best known in his later years for his large-scale folk art outdoor wooden sculptures. But Bernard started out his artistic career as an oil painter, with scholarships to the Corcoran School of Art in Washington, D.C., a Fulbright to Norway, and a scholarship to the Skowhegan School of Painting and Sculpture down the road from the Indian.

While renovating his summer cottage in Cushing in the late 1950s, Langlais discovered a love for working with scrap wood, a process which he called “painting with wood.” He ended up moving back to Maine permanently and up until his untimely death, created 65 large wooden “folk art” sculptures all around his 90 acre property.

When Skowhegan decided to erect a monument to the “Indians”, they commissioned a 30 foot tall figure with with a headdress, loin cloth and tomahawk. But Langlais challenged that design and instead built a sculpture twice that height to resemble a traditional Abenaki fisherman. He worked on it at his Cushing farm over a 3 year period and then had it trucked 75 miles to Skowhegan for installation in 1969.

After his death in 1977, his widow Helen remained on the Cushing farm and cared for the art. When Helen died in 2010, she left the property and art to Colby College. The Kohler Foundation then acquired the property, gifted it to the Georges River Land Trust, and the two organizations worked to create the Langlais Sculpture Preserve in Cushing. After a 5 year, $2.5 million restoration in Cushing, the Preserve opened in 2012 and visitors can leisurely wander the trails and enjoy Langlais’ creations.

Originally, the Skowhegan Tourist Hospitality Association had plans to make the sculpture the centerpiece of a new park and to incorporate a nearby grist mill as a museum. But that never happened, and businesses were built nearby, including the Cumberland Farms that now partially blocks the view of the sculpture from the road. Between the trees that have grown up and the businesses that surround it, I doubt the artist would be thrilled to see the setting today.

By 2004, 35 years of Northern Maine weather had taking quite a toll on the sculpture. An engineering study was completed and some emergency preservation work was executed. But the structure was still in danger.

In 2010, funds were raised, and a larger restoration project was undertaken. They hired Stephen Dionne, a builder, woodworker and restorer from Skowhegan to oversee the project. The goal was to stabilize the sculpture and leave as much of the original piece alone. But significant rot, rust, and ant damage was discovered and ultimately, major surgery was required.

The hands and feet showed the worst wear and had to be replaced. The interior diagonal brace was broken and had to be fixed. They also removed bird nests, cleaned the base, stapled screening to the underside to keep out critters, applied a special solution to the legs and feet to deter further decay, replaced rusted bolts and flashing, and installed stainless steel guy wires to stabilize the structure. The entire sculpture then needed to be repainted. To stay true to the original, they sent paint samples to a Virginia conservator for analysis so that they could match Langlais’ pigments.

The sculpture was rededicated in September, 2014 after a 4 year restoration project. There were renewed talks of a larger Langlais park to honor the artist, but it seems that has not amounted to much so far. 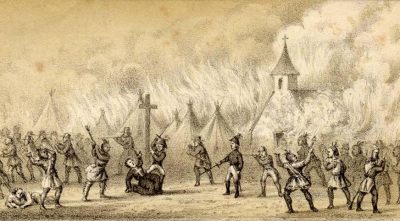 From downtown Skowhegan, go North on Madison Ave.  It is located on a short hill behind the Cumberland Farms on the corner of Madison and High Streets. 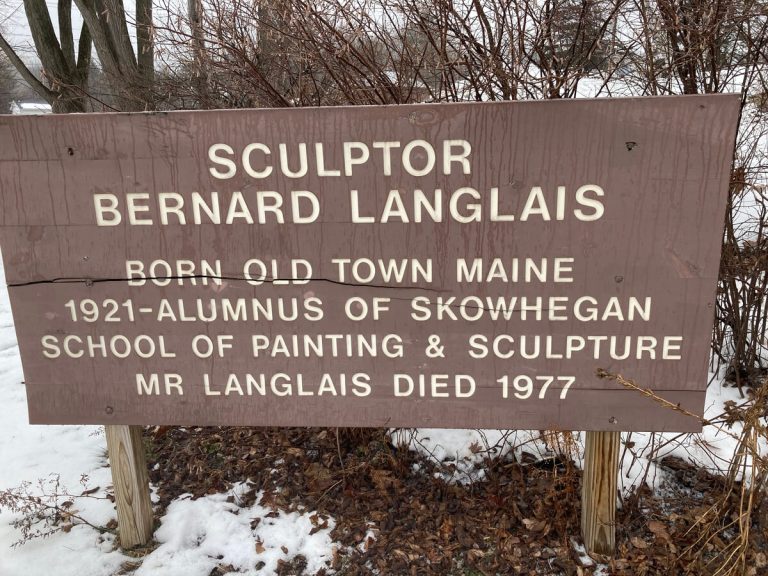 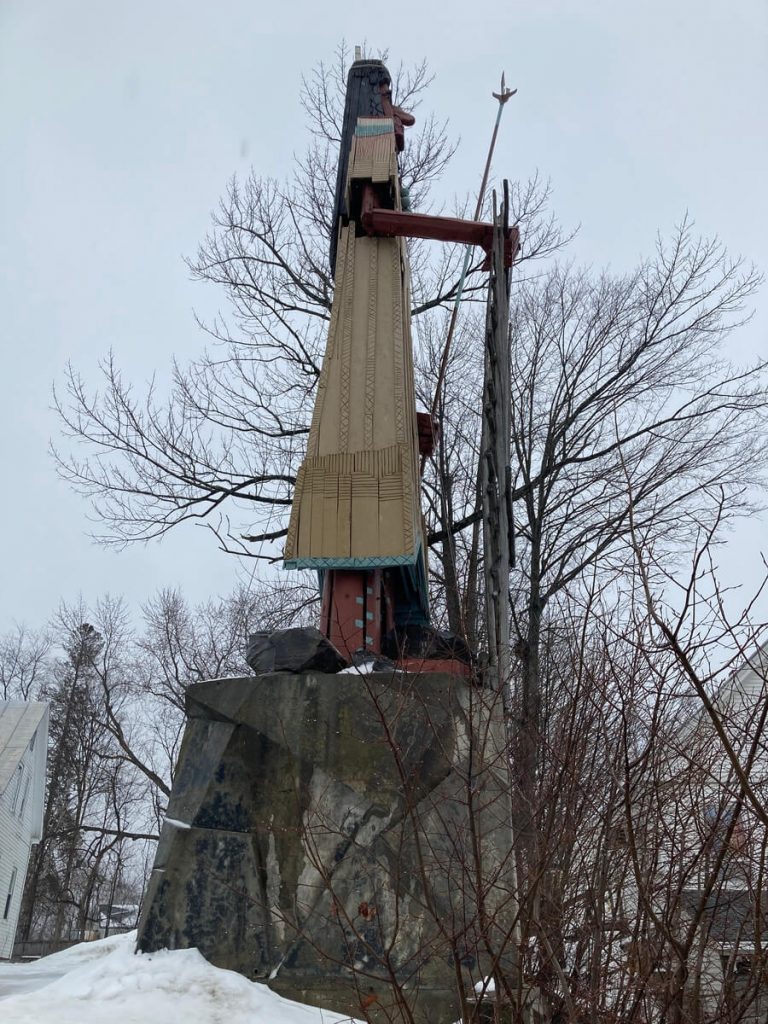 On the back of the base 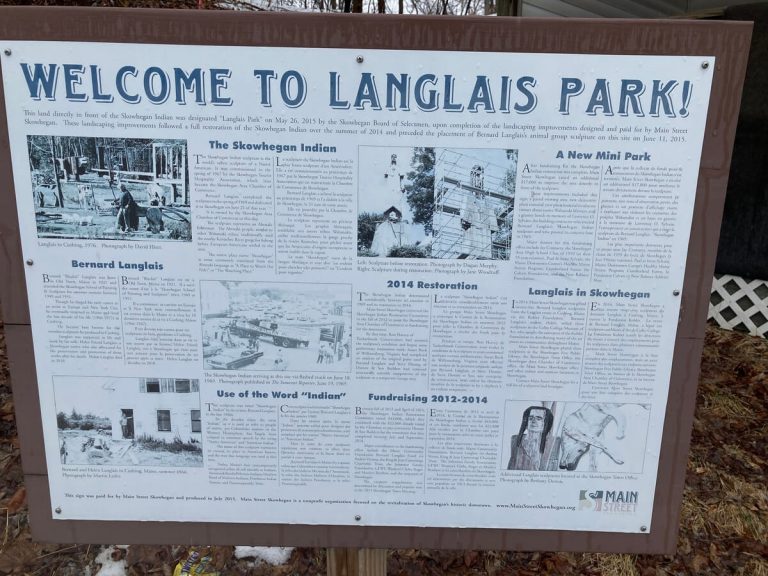 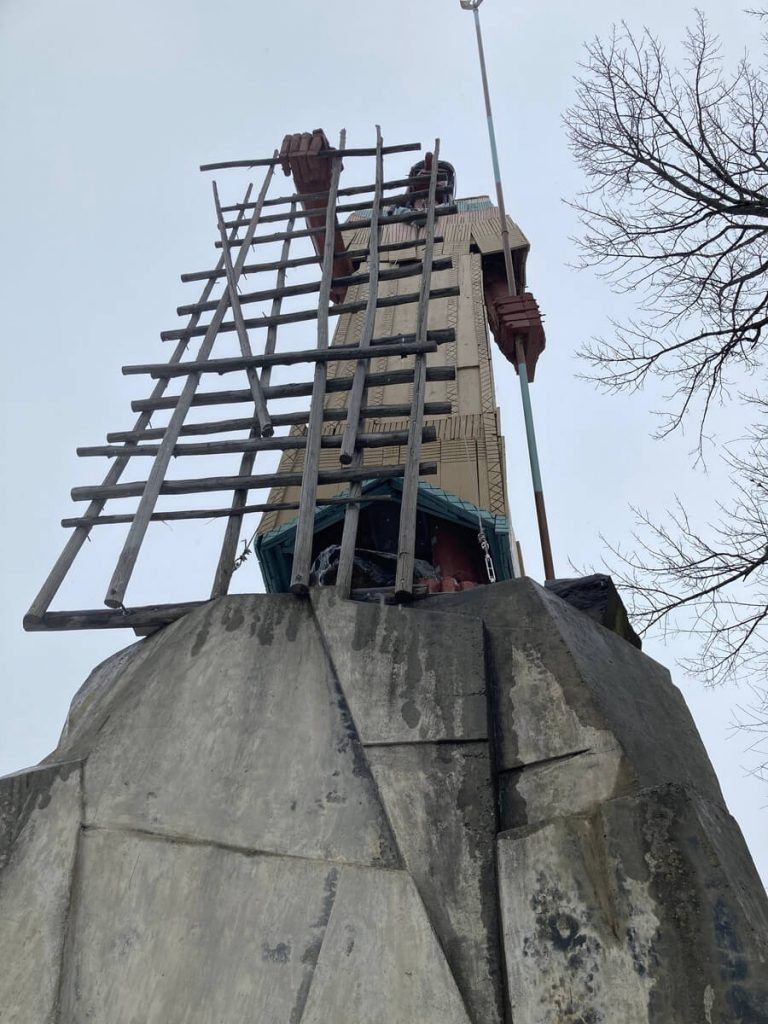 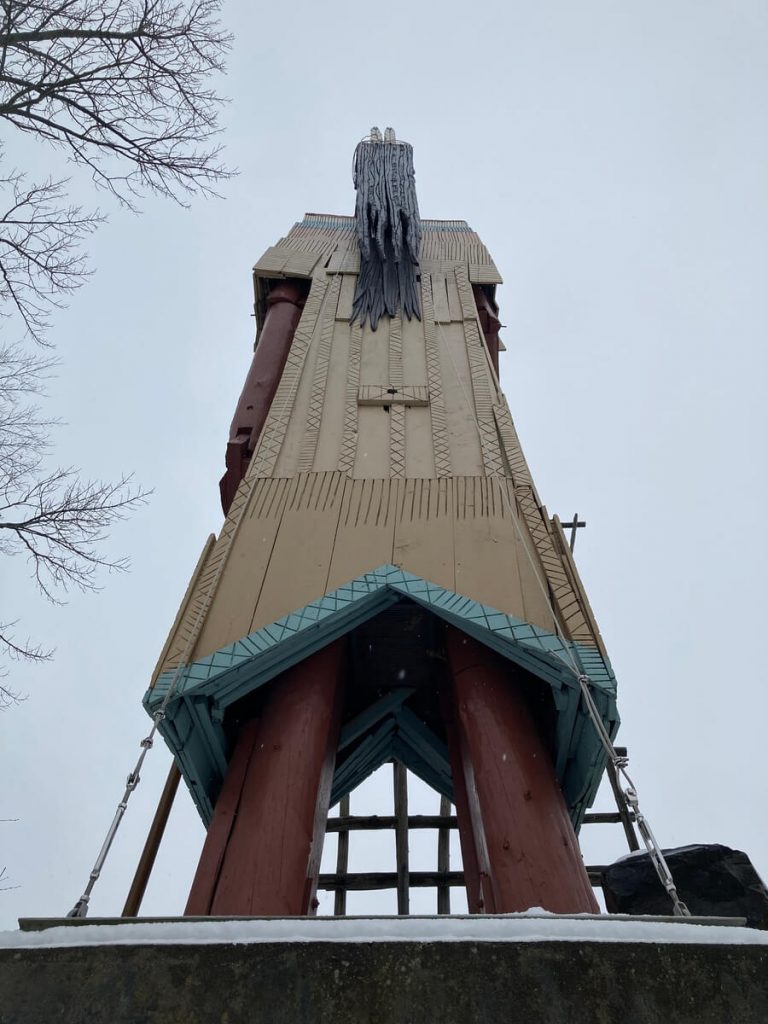