Squirrel Point Light is a small lighthouse on the Kennebec River, located south of the City of Bath at the tip of Arrowsic Island. It is part of a 4 light system constructed in 1898 to aid in navigation of the tidal river. The still-functioning light is owned and maintained by the U.S. Coast Guard while maintenance of the buildings and access to the property are managed by a nonprofit group called Citizens for Squirrel Point. The surrounding 640 acres of land, including the adjoining Bald Point Preserve, is conserved by Inland Fisheries & Wildlife and The Nature Conservancy. The Squirrel Point Light Station is listed on the National Register of Historic Places.

Squirrel Point Light consists of a light tower, the 2-story keeper’s house, a barn, boathouse, and an oil house. The 25 foot octagonal light tower on the water’s edge currently features a 250mm modern lens which replaced the 5th order Fresnel lens. The boathouse is a bit odd as it was built on the slope to the water without leveling the foundation so the roof of house is parallel with the sloping land but the window and ends are parallel with the water giving the boathouse a rather “crooked” look.

In the first few years of operation, various improvements were made to the tower including the addition of a 1,000 pound fog bell. Access to the lighthouse was by boat from Phippsburg center which is located directly across the river from Squirrel Point.

In 1717, when Maine was part of Massachusetts, relations with the Native Americans along the Kennebec were far from peaceful. Then Governor of Massachusetts, Samuel Shute, travelled up the Kennebec to meet with local tribes on tiny Lee Island, just North of Squirrel Point, to discuss a treaty. Shute was not known for his diplomacy and proceeded to offend and insult the Wabanaki. When the Wabanaki said they would agree to let existing settlements stay if a boundary could be set, he replied murkily with “we desire only what is our own, and that we will have” which did nothing to appease the Wabanaki.

On the way back from this odd “peace meeting,” his frigate The Squirrel ran aground on a dangerous bend in the river and that very spot was named Squirrel Point.

The always riveting “Annual Report of the Lighthouse Board for 1892” recommended that a system of lights be established on the dangerous section of the Kennebec just South of Bath. At the time, the only lights on the river were lanterns hung on buoys at turns and dangerous points to help ships navigate the tricky turns through the fog that frequently appeared. On dark knights, it was nearly impossible to tell the water from the shore. In addition to the ships being built at Bath Iron Works and the other ship yards, over 3,000 vessels sailed the river during the year. Large passenger steamers like the 1,500 ton Kennebec made daily trips to Boston and travelled the Kennebec as far up as Augusta. Traffic was increasing and the cargo was too valuable to risk.

It was recommended that an integrated system of lights be erected consisting of (from North to South) the Doubling Point Light, Range Lights, Squirrel Point Light, and Perkins Island Light. President Grover Cleveland signed off on funding, and the systems lights and support buildings were constructed in 1898 based on a master plan. The 25 foot towers are nearly identical.

The first lighthouse keeper was George Matthews who served from 1898 to 1916. He held that position until he was 70 years old when he was replaced by Charles L. Knight. Charles desperately wanted a change from his repetitive desk job in the Lighthouse Inspector’s office so he requested to be transferred to Squirrel Point, eagerly accepting the substantial annual pay cut from $900 to $552 (approximately $13,000 in 2021 dollars).

A series of keepers lived on site over the years, maintaining the light and property and communicating with the keepers of the other lights in a tight-knit community. Squirrel Point was finally automated in 1979, eliminating the need for a keeper, and its fresnel lens was replaced with a modern optic.

As the 20th century rolled on, the need for traditional lighthouses dwindled. Passenger travel moved to trains, planes, buses and cars and the steamship routes between Boston and Maine completely shut down by the 50s. Shipping goods by truck was far faster. Traffic on rivers like the Kennebec dropped dramatically.

At the lighthouse locations, the keepers’ houses and support buildings were rendered obsolete and quickly fell into disrepair. The Coast Guard still owned them, but really didn’t want to continue the upkeep of them unnecessarily.

Peter Ralston of the Island Institute was horrified when he saw what was happening to the lighthouses of Maine. These iconic buildings were in danger of disappearing. Along the coast, 64 lighthouses were in danger of become fully automated airport-style beacons and the buildings were falling apart. He approached the Coast Guard about the possibility of transferring ownership to private entities or organizations.

Nothing much happened until 1989 when a fire nearly destroyed the keeper’s house at the Heron Neck lighthouse on Greens Island near Vinalhaven. Ralston approached a TV reporter in Portland who managed to get the attention of the Today Show. A segment ran offering a “lighthouse for free” if you were willing to maintain it.

The only problem was that you needed an Act of Congress to transfer ownership.

So Peter Ralston enlisted the aid of Senators Olympia Snowe and George Mitchell who managed to get legislation passed in 1993 and the first lighthouse passed from the government to private hands.

But there were many other lighthouses in similar shape and the Coast Guard was planning on demolishing seven of them. In order to conduct mass transfers of the remaining lighthouses, new legislation created the “Maine Lights Program” in 1996 and was signed by President Clinton. To help fund the program, the artist Jamie Wyeth sold limited edition prints of his painting of Southern Island Light. The proceeds from the art sale completely paid for administrative costs of the transfers.

The program stated that:

In 1996, Squirrel Point Light was conveyed to Squirrel Point Associates, a nonprofit of one created by Mike Trenholm, a semi-retired real estate dealer from Yarmouth. He made some improvements but health issues stalled progress.

Squirrel Point is still a functioning lighthouse. After its light was converted from a Fresnel lens and replaced, its power source was switched to solar in 2008. Its fog horn was disconnected because every boat traveling the Kennebec is equipped with GPS.

The original Fifth Order Fresnel lens used at the Squirrel Point Light is now on display at the Portland Head Lighthouse Museum at Fort Williams.

Citizens for Squirrel Point continues to raise funds and improve the property, currently focusing on stabilizing the buildings. The all-volunteer organization is always looking for help.

Here is a map showing the trails that lead from the parking lot to Squirrel Point and to the Bald Head Preserve. 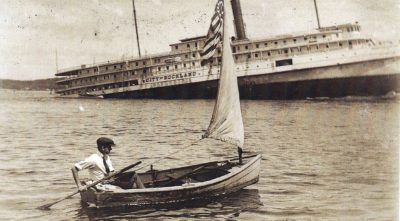 The (Mis)adventures of the S.S. City of Rockland

From Bath, go over the bridge and take a Right onto 127 South into Arrowsic. Drive 4.5 miles and take a right onto Bald Head Road – take the (mostly) 2.2 mile dirt road to the end. Limited parking. 0.6 mile walk over easy paths to the light house. 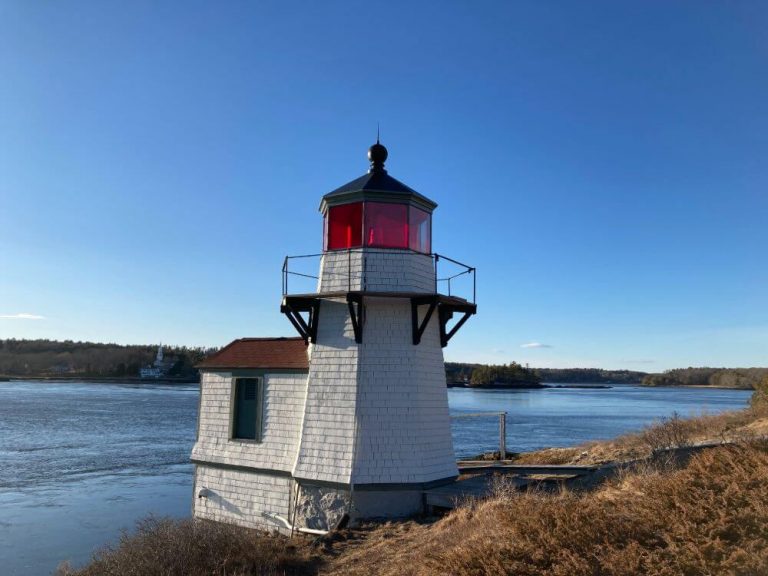 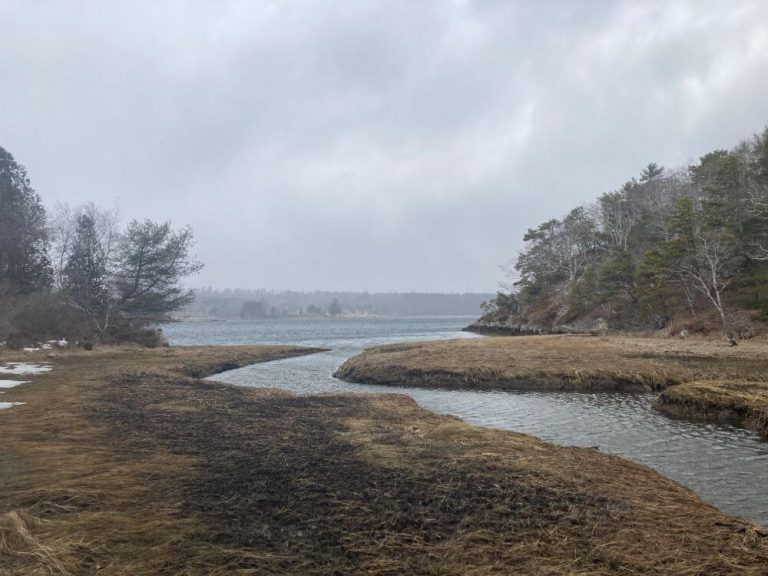 On the way to Bald Head Preserve 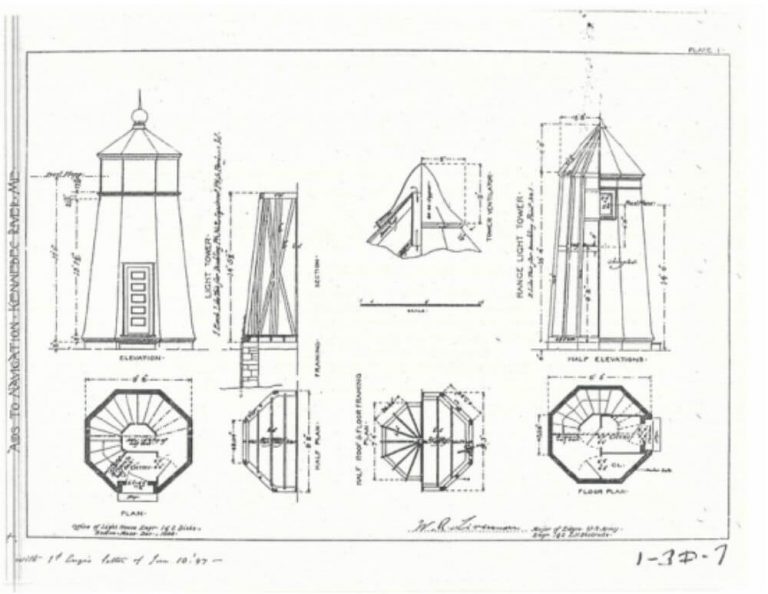 Original plans for the lighthouse 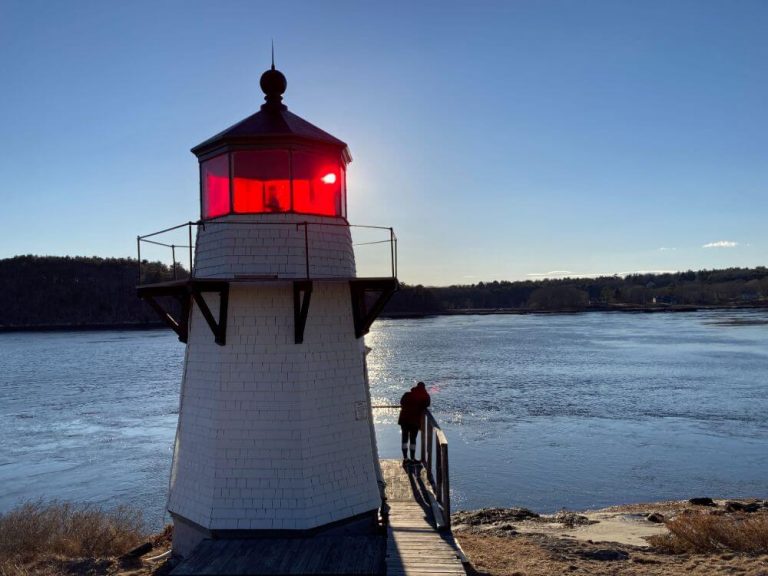 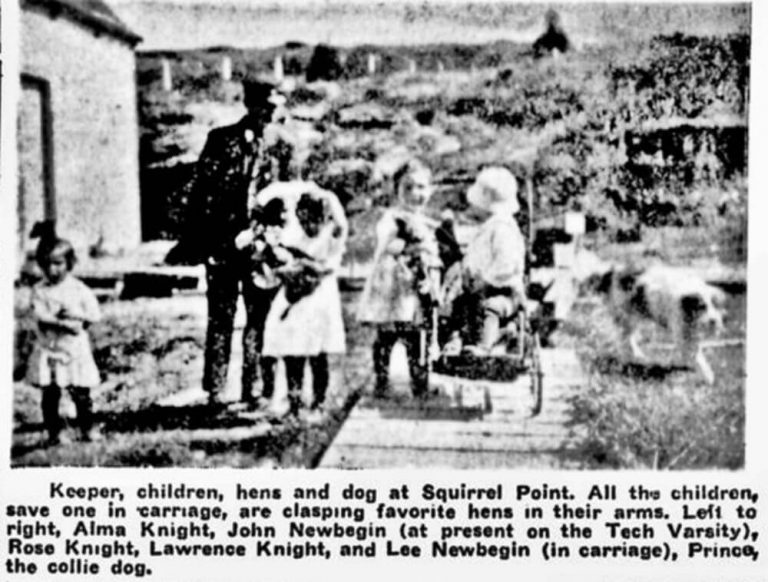 One of the lighthouse keepers, Charles Knight, and children 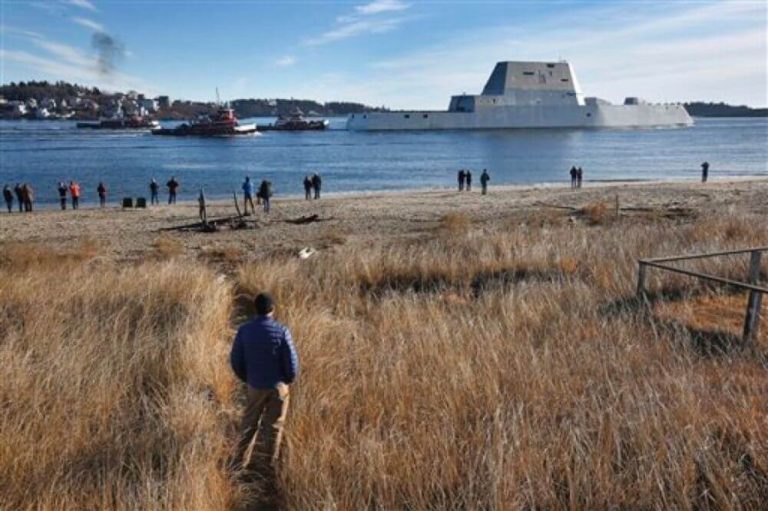 Navy destroyers like the Zumwalt still pass by the lighthouses 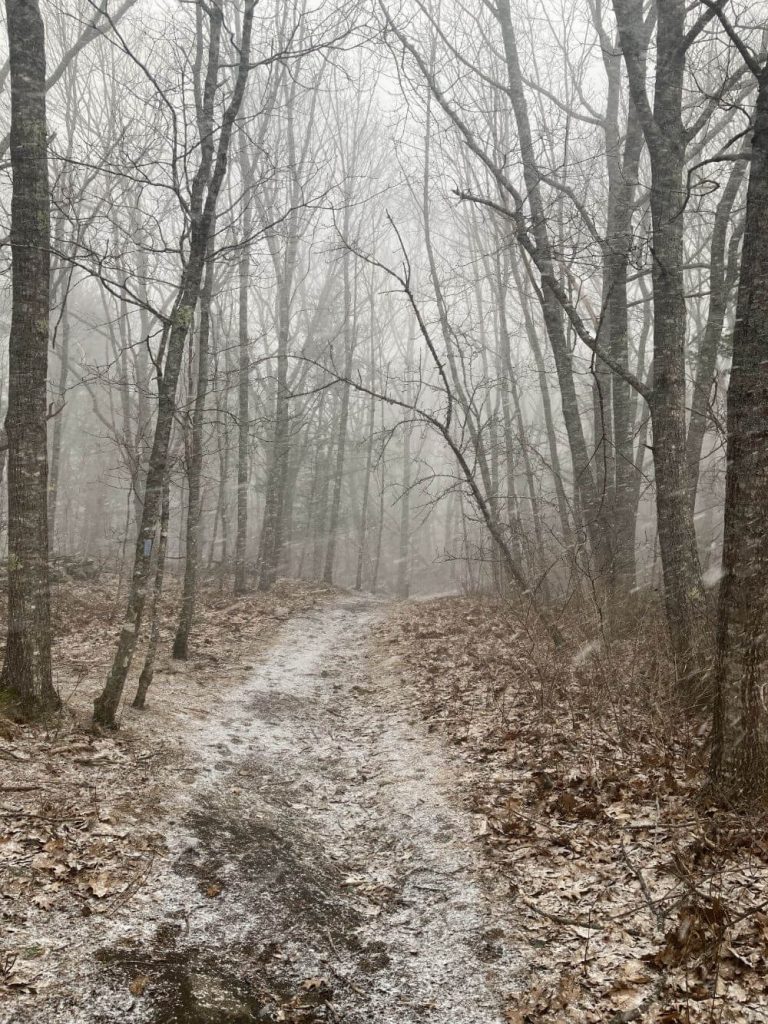 A snowy walk to the lighthouse 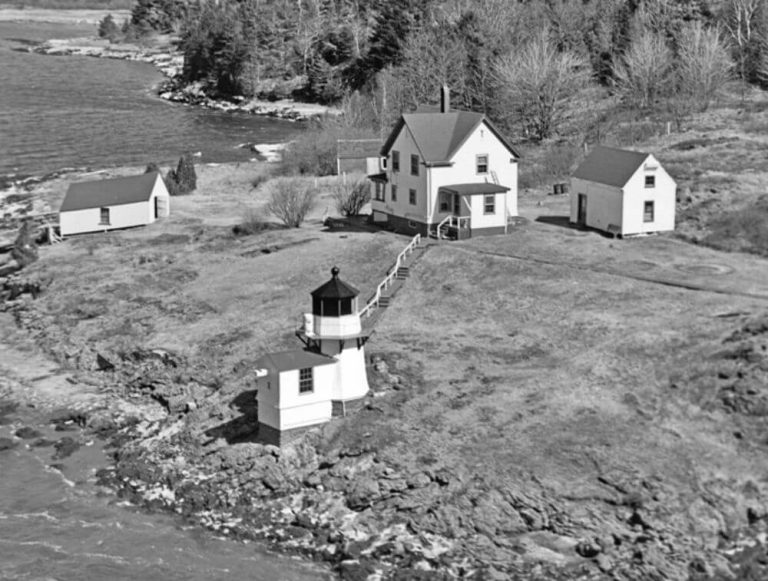 Another view of the lighthouse and property, date unknown 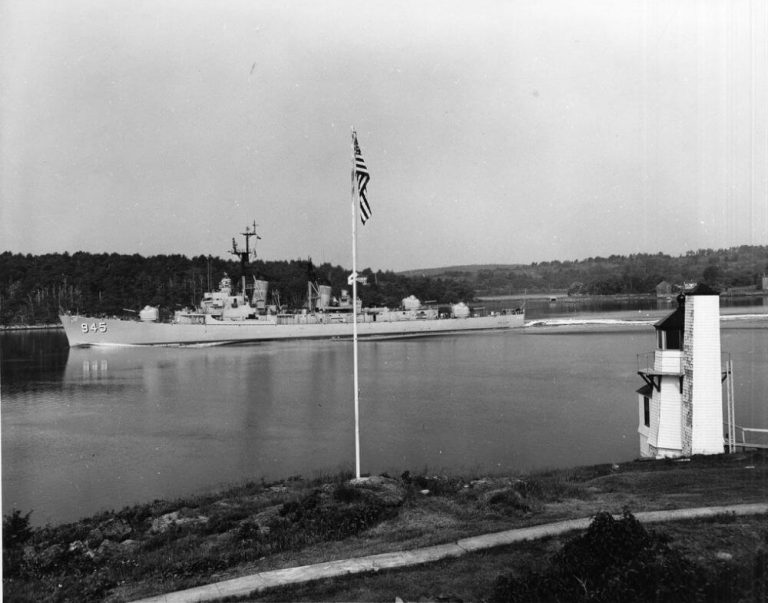 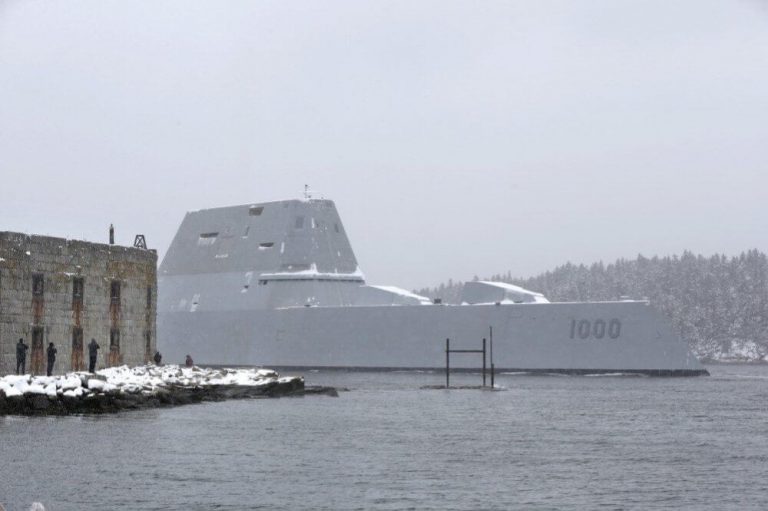 Zumwalt passing by Fort Popham at the mouth of the Kennebec

March 2021 showing the keeper's house in need of repair

One of the lighthouse keepers, Asa Smith, date unknown 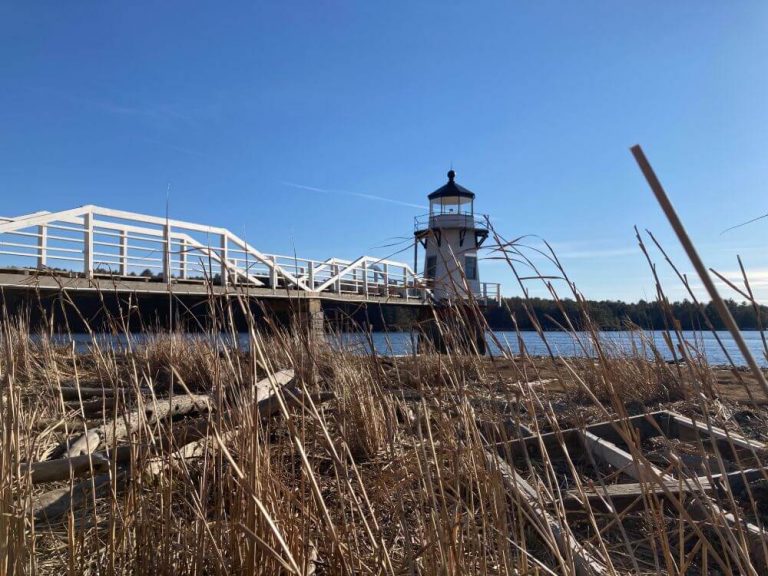 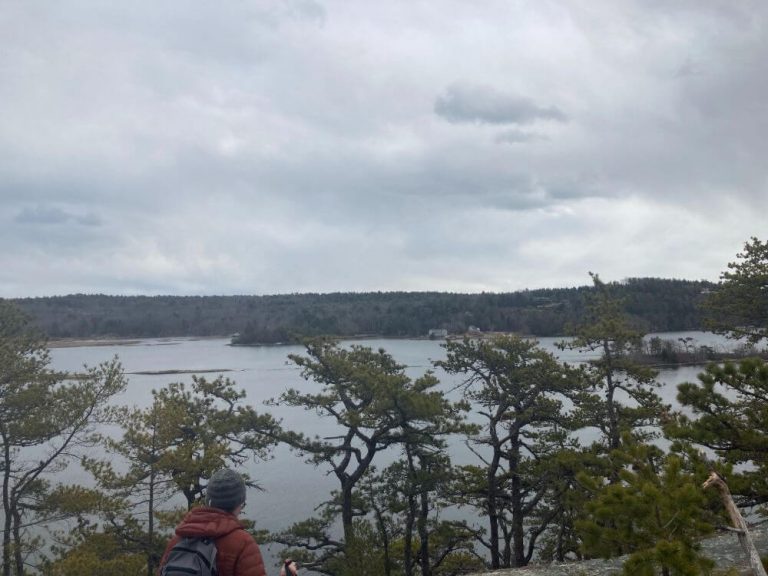 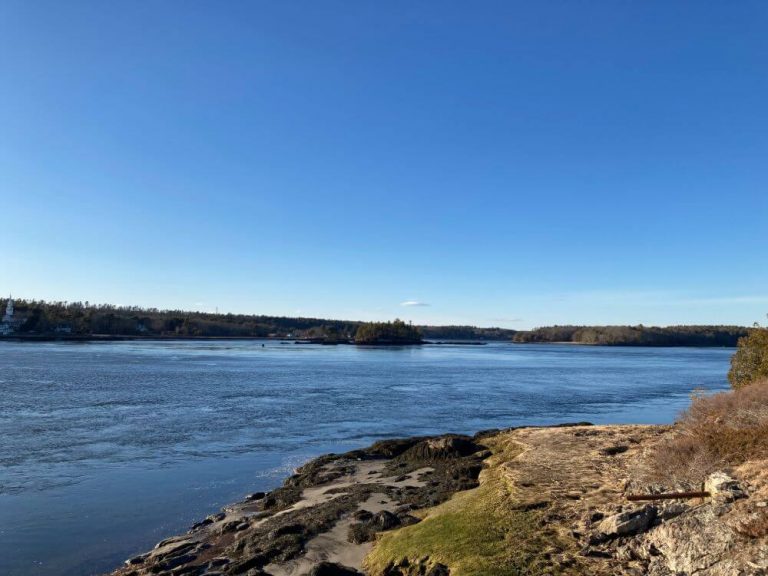 The (Mis)adventures of the S.S. City of Rockland