The Thomas Hill Standpipe is a large water tower on a hill in Bangor that holds 1.75 million gallons of water. It is really two structures: a large riveted wrought iron tank surrounded by a white painted wooden shell. Between the tank and the shell is a circular staircase that leads to a covered promenade deck that provides panoramic views of Bangor. It was built in 1897 and was designed to help regulate water pressure in downtown Bangor and also be available to firefighters if needed.  It was listed on the National Register of Historic Places in 1974.

What the Heck is a Standpipe?

As cities grew and buildings got taller, municipal waterworks struggled to provide the consistent water pressure needed to reach higher floors – especially as outdoor plumbing moved indoors. The early steam powered pumps created surges which rattled pipes throughout buildings and could only push water so high. Some cities, like New York City, compensated by installing water tanks on the roofs of buildings to provide gravity-fed water to the higher floors while the lower floors were served by traditionally pumped water. In fact, there are still over 17,000 tanks across NYC and are a crucial part of the city infrastructure.

Another technique was to build large water towers called standpipes on high ground. Hundreds of standpipes were built across the country in the late 1800s. They were typically huge iron tanks built both to provide significant pressure and to absorb the pulses of water created by the steam pumps that were in a nearby building. To make them more a bit prettier to look at, they were often surrounded by wooden structures – some of which were quite elaborate. Milwaukee’s North Point Tower is a Victorian gothic tower and an elaborate example of a standpipe.

In 1883, the Bangor Water Board recommended that a water tank be built on Thomas Hill. The project sat dormant until the land was purchased in 1895. The contract was awarded to the New Jersey Steel & Iron Co. while Bearce & Clifford of Lewiston built the foundation.

It was much smaller than originally proposed (1.75 million vs 10 million gallons) but was capable of providing 3280 gallons a minute to the city.

The wooden exterior contract was given to Major James M. Davis of Bangor who had recently built the original Bangor Auditorium in just 22 days. Davis setup a portable sawmill and, using 22 men, finished the shell in just 6 months with 42,000 feet of pine and 220,000 cedar shingles.

“The standpipe will not only serve as a reservoir, but will make one of the best observatories in Maine”
– Bangor Mayor Flavius O. Beal, 1898

A Nice View from the “Crown”

For many years, the tower was open to the public and thousands of visitors enjoyed the views each year. The building was completely open and visitors strolled the grounds, used the neighboring park, and enjoyed the 100 stair climb to the deck. They even installed seats on the promenade deck so visitors could enjoy the surrounding countryside while nibbling on a sandwich.

In 1908, a string of lights was added to the tower and additional lights were added a few years later. The lights have been referred to as “the crown on the Queen City.” The lights were upgraded in 2014 to LEDs.

In 1940, two boys were playing on the interior stairwell when 12-year-old Howard Goodell fell 25 feet from the railing. He died the next day from his injuries. Shortly after, the standpipe was closed the the public and wouldn’t re-open for a long time.

The building was originally painted dark gray and in 1912, it was painted white. Then during World War 2, the Army requested that the promenade lights be turned off and that the tower be painted olive green. This was to prevent enemy airplanes from using the standpipe as a navigation aid to help find (and attack) nearby Dow Airfield (which is exactly what the US pilots had been doing for years). The only light that remained was a single red light on top of the flagpole. Near the end of the war, the lights were turned back on and 4 years later, the building was repainted white.

The standpipe remained closed to the public for more than 50 years. Then in 1991, the Water Board’s Trustees voted to reopen the standpipe 4 times a year for tours. Water District employees led groups of visitors to the top on these quarterly tours until the COVID pandemic forced them to once again close down.

Bangor’s most famous resident Stephen King lives a few blocks away from the standpipe. According to him, he also wrote a significant portion of his book “It” in the standpipe’s shadow. In the early 1980s, he would walk down the street, sit on a park bench in the small park beneath the standpipe, and write the book. It is said that the tragic stairwell death of the boy in 1940 influenced the creation of the book’s character Pennywise the Clown. In the 2017 remake of the movie “It,” one of the characters bikes by a standpipe in the fictional town of Derry – which is King’s thinly disguised version of Bangor. The standpipe was CGI-generated and the movie was filmed in Toronto. There are also references to the standpipe in his other books “Dreamcatcher” and “11/22/63.”

From downtown Bangor, drive up Union Street, take a Right on Thomas Hill Road and the Standpipe is at the turn across from Summit Park. 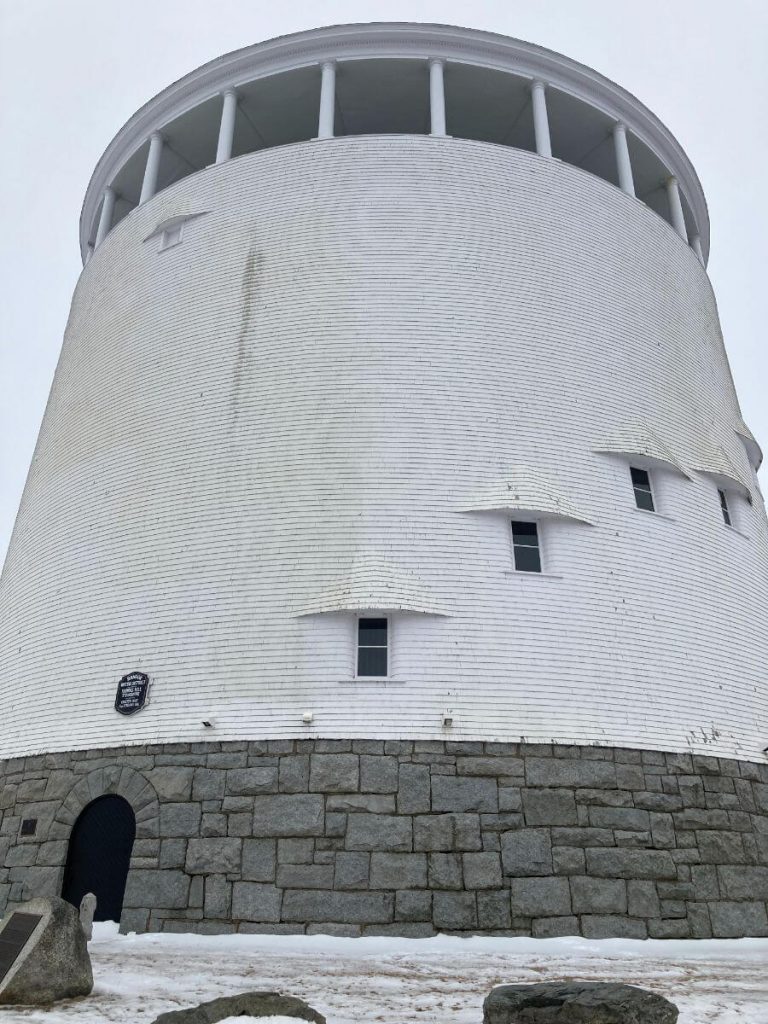 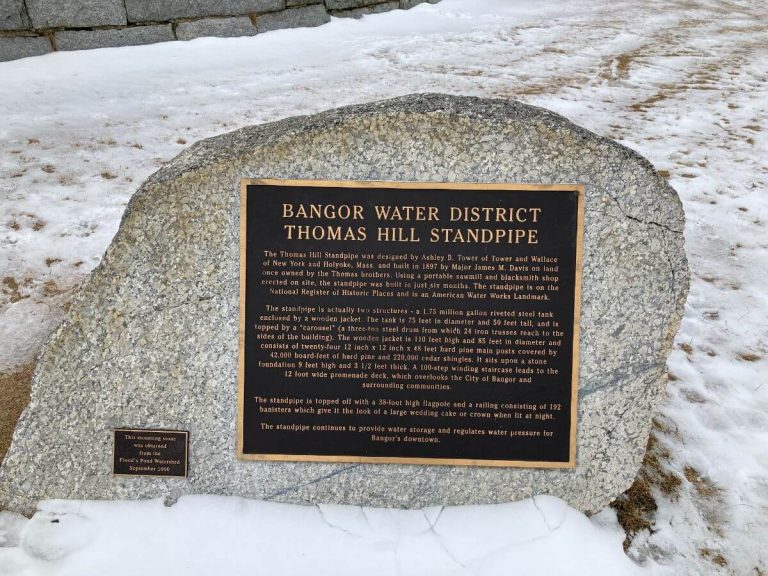 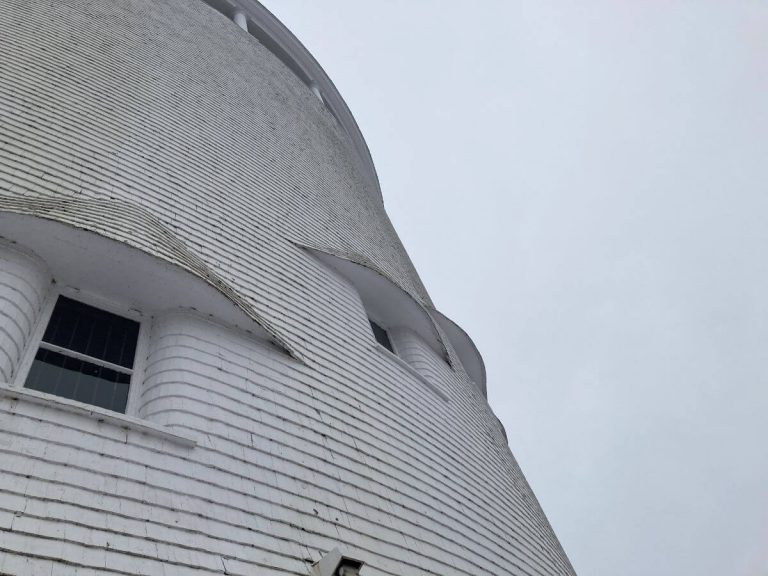 The windows winding up the exterior, Feb 2021 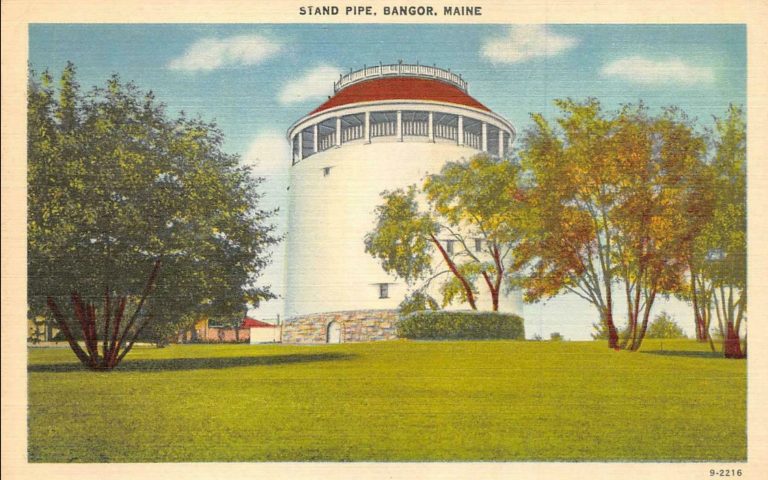 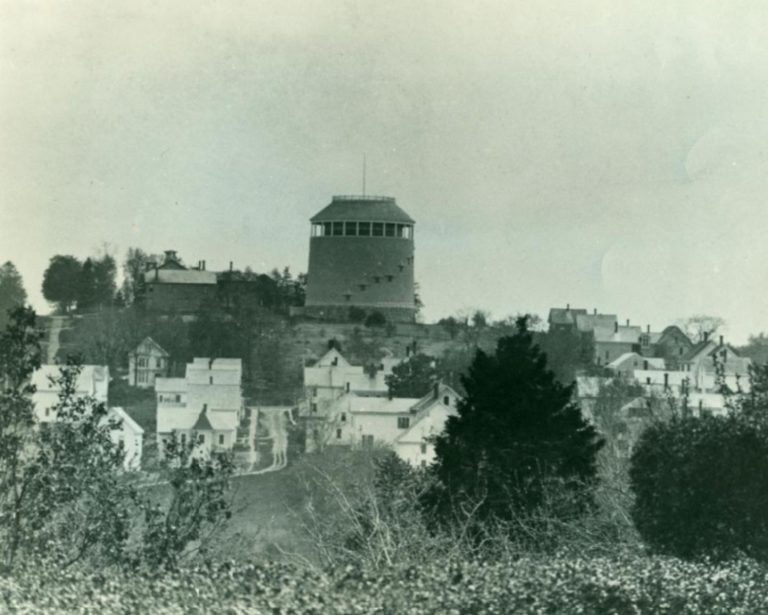 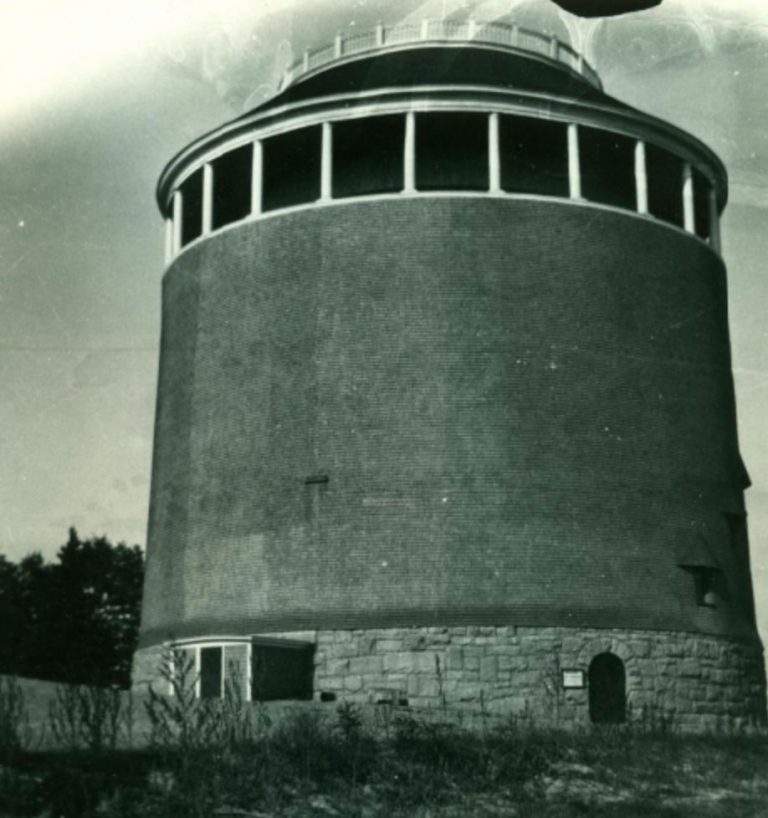 A closer look at the camouflaged standpipe during WW2 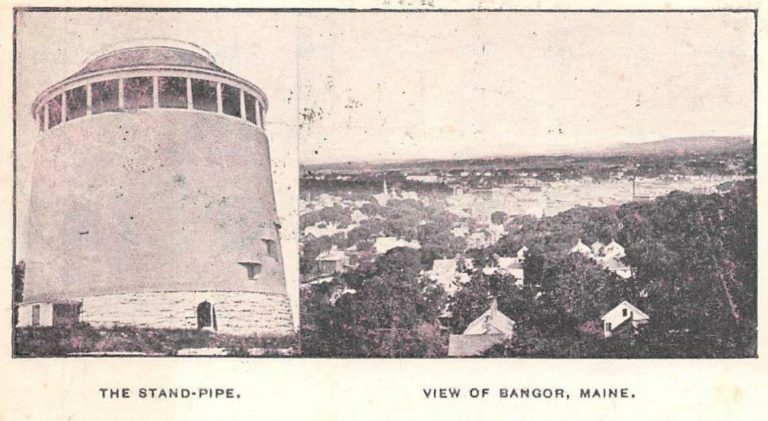 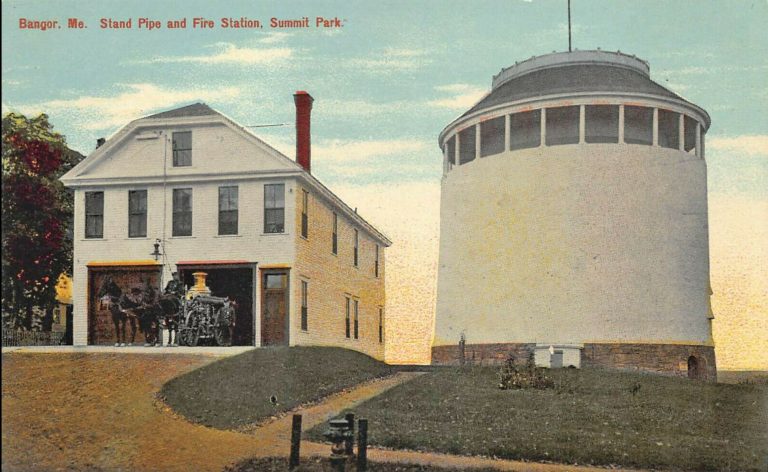 1911 postcard with the fire station next door 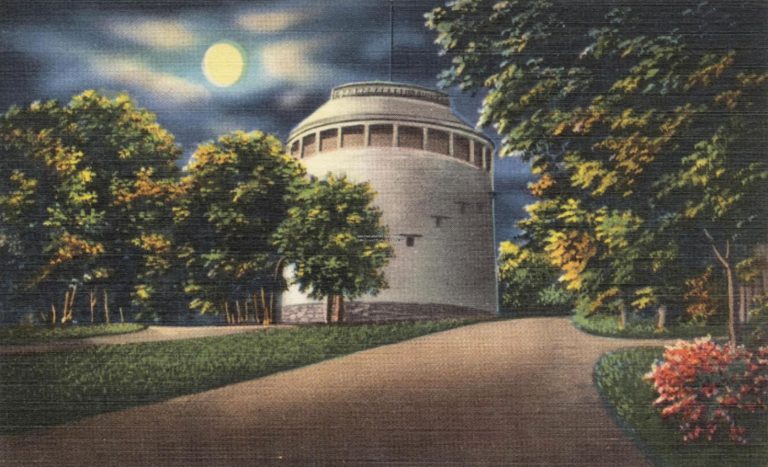 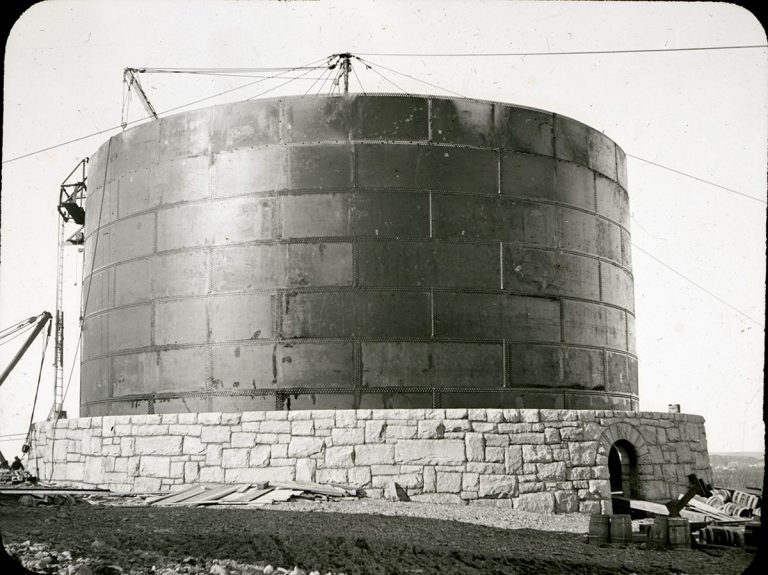 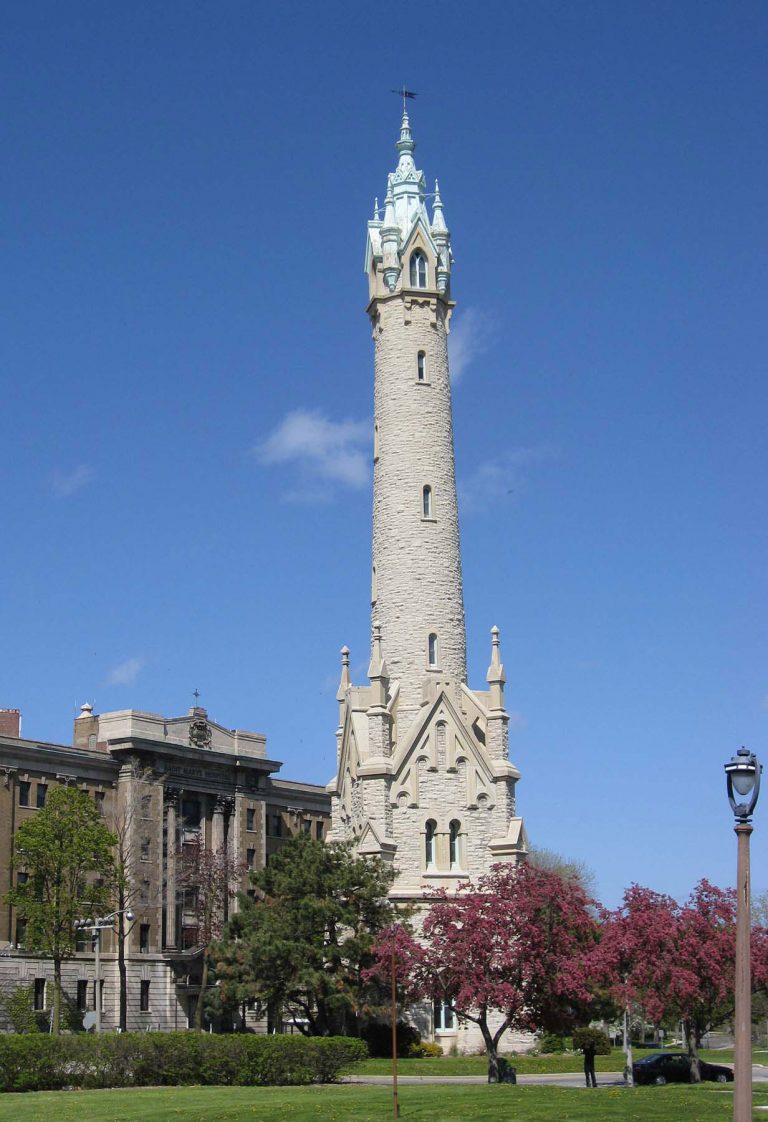 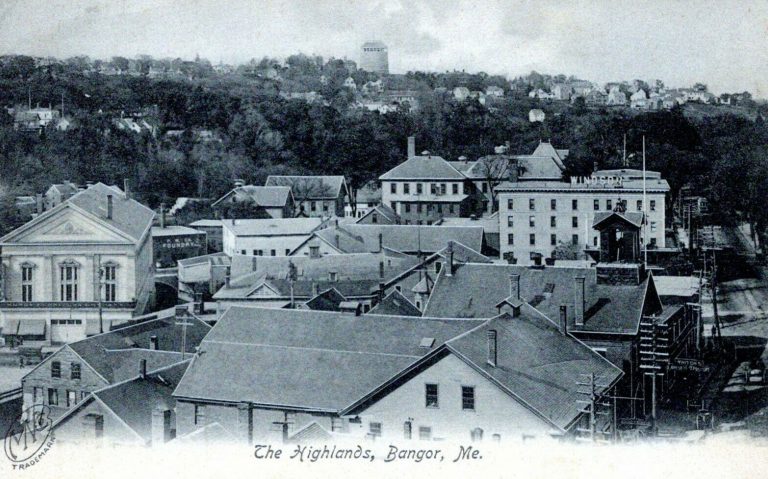 Standpipe visible from the city, 1905 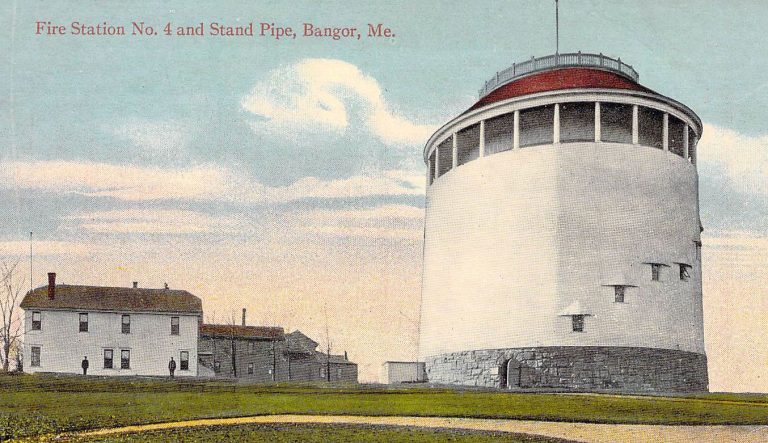 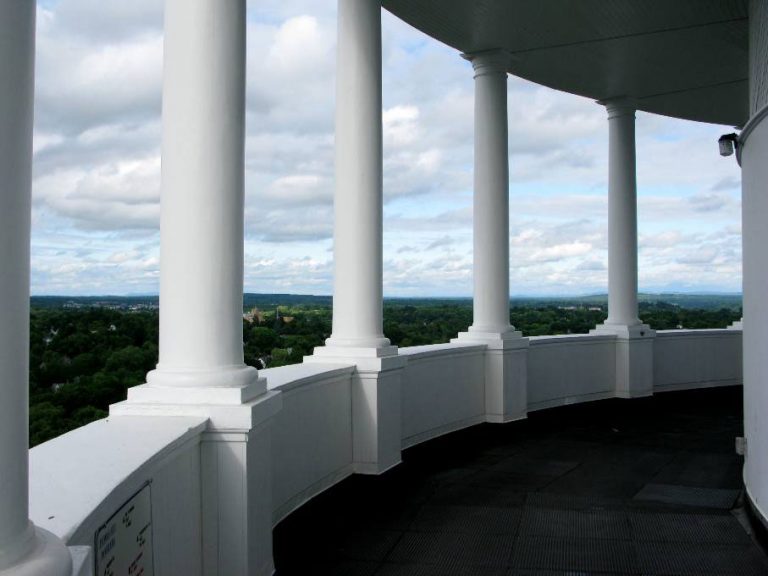 View from the promenade
SOURCES & CREDITS: