If you drive from Bath to Cook’s Corner in Brunswick along the State Road, you just might notice a huge metal tower rising over the trees behind some auto repair shops at the top of Witch Spring Hill. It is the remains of a cold war long-range radar installation and lessons learned there led to refinements and advancements in radar technology.

A Secret on the Hill

In December of 1954, “Mr. Sandman” by the Chordettes was at top of the charts and construction began on a secret “experimental electronics station” in West Bath. A press release from the Massachusetts Institute of Technology said that the project was part of the Continental Air Defense research being carried out under a government contract by Lincoln Laboratories, an MIT research facility.

As soon as the massive orange and white striped antenna was put on top of the 100 foot tower, everyone knew that it was actually a radar installation. But what was it for and why was West Bath chosen? The “why” was easy: the hill was one of the tallest points in Midcoast Maine.

What was installed was the first and only AN/FPS-31 radar. It was a prototype long range search radar system that was part of the Experimental SAGE Subsector. SAGE (Semi-Automatic Ground Environment) was a system consisting of massive computers that collected data from a network of radar sites, processed the data in real time to identify Soviet air attacks, and then directed the military response.

At the time, radar data had to be manually collected and analyzed which was too slow to be effective. They needed to leverage nascent computer technolgy to handle the data quickly and efficiently.

Initially, the FPS-31 was connected to a computer at MIT’s Lincoln Labs at Hanscom Air Force Base in Massachusetts. Data from the FPS-31, along with data from similar sites in Truro, Mass and Montauk Point, Long Island was sent over phone lines to the IBM FSQ-7 computer (largest computer ever built) for processing.

The designation AN/FPS-31 was based on the naming convention for radar:

Initial tests showed various problems with the installation. The radar was jamming mysteriously and it was determined that traffic noises from near-by Route 1 were part of the problem.

They also found that the radar was so strong and sensitive that it was being disturbed by echoes from the Aurora Borealis far to the north.

The design called for the gigantic 4.75 ton antenna to rotate on a set of wheels connected with three spider legs. The wheels would ride on a track at the top of the tower. But the sheer weight of the antenna caused the wheels to wear out prematurely so they swapped out the wheel assembly for one giant central ball bearing (this design was carried over to later units). Although this was an improvement, the bearing would wear out as well and required 3 months of downtime to replace it.

Although the FPS-31 was never mass produced, it was a success. Tests showed that the network could successfully identify and track targets.

The experience that Lincoln Laboratory gained in solving all these problems was shared with others in the defense industry, and led to subsequent successful designs in other early warning ballistic missile tracking systems around the country.

The installation was decommissioned in November 1962.

A Second Life for the Tower: Sonar in a Tank

Five years after it shut down, the tower was taken over by VAST, Inc. out of Newcastle. It retrofit the tower to use as a corporate and military research facility for underwater testing.

The first contract was to evaluate helicopter-suspended Navy sonar equipment under simulated conditions for both hovering and flight.

In order to create such a water simulation, a giant tank was built inside the fret work of the existing tower. This tank (still visible today) could hold up to 450,000 gallons of water and was open at the top. A 328-square foot “control penthouse” was built 30 feet above the top of the tower, and a one-ton electric hoist was also mounted on the top. The hoist was used for lifting test equipment to the penthouse and then lowering it into the research tank.

For direct viewing into the tank, there were 12 portholes built into the sides at four different levels, and a circular stairway built to surround it on the outside. Eight fixed 500-watt quartz-iodide underwater lamps and one portable 250-watt lamp were used for underwater illumination. A filtering system with a 650- gallon-a-minute capacity enabled researchers to make a complete change of water in only 16 hours. There was a heating element inside as well, which prevented freezing during the winter. The water to fill the tank was pumped from a small pond across the Bath Road (still there). Local fire department tank trucks could siphon water from the tower through special fittings placed there for fire emergencies.

This water research didn’t last long. Only 2 years later in 1974, the Navy decided to discontinue the research and moved their equipment to Maryland. The NAVY took the parts they wanted and VAST was left to dismantle the rest.  The last step was to use a blowtorch to create a hole at the bottom to drain the water (still visible).

Since then, emergency communications towers have been added on top of the tower and a cell tower was built off to the side. 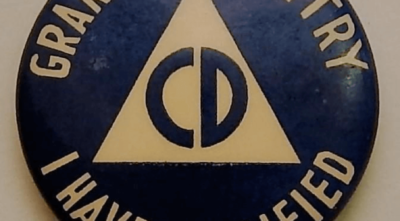 Maine Civil Defense in the 1950s

From Bath, take the State Road towards Cook’s Corner.  At the top of the hill, take a Left before Dr. Coffin’s Garage.  The site is visible from State Road.

B&W view from below - from the Lincoln Laboratory Journal, 2000 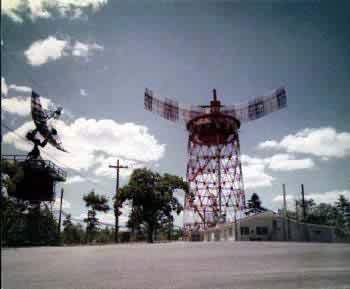 Color capture from a video. One of the 2 AN/FPS-24 radars is visible on the left of the main AN/FPS-31. 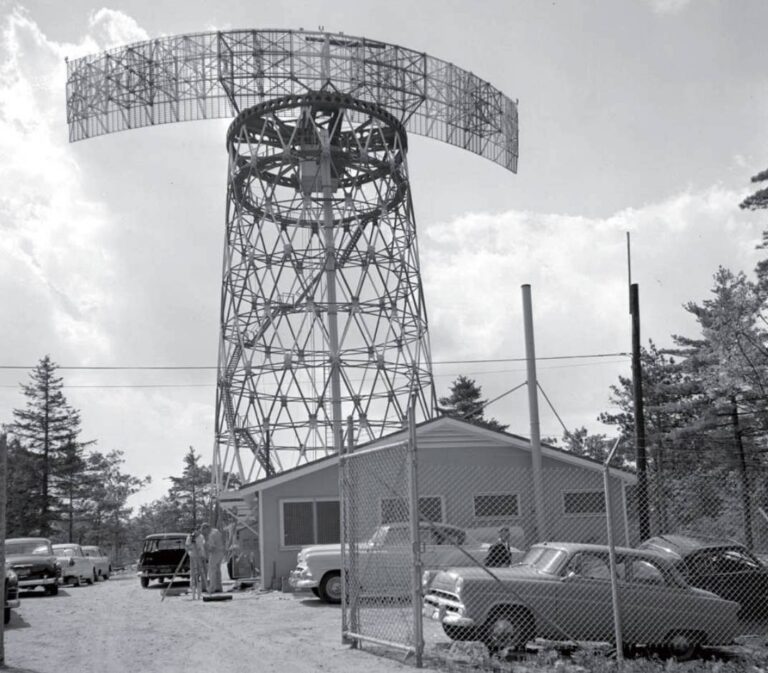 View from the front showing the original building 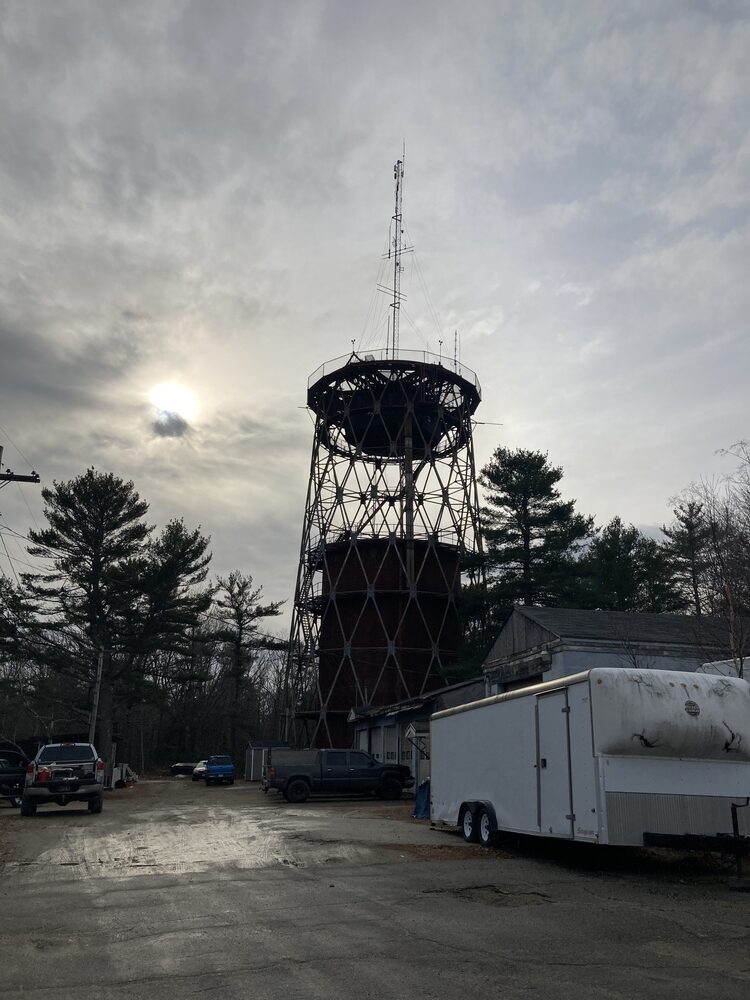 Same view as before - 65 years later. The radar tower in December 2020 showing the giant water tank inside the structure 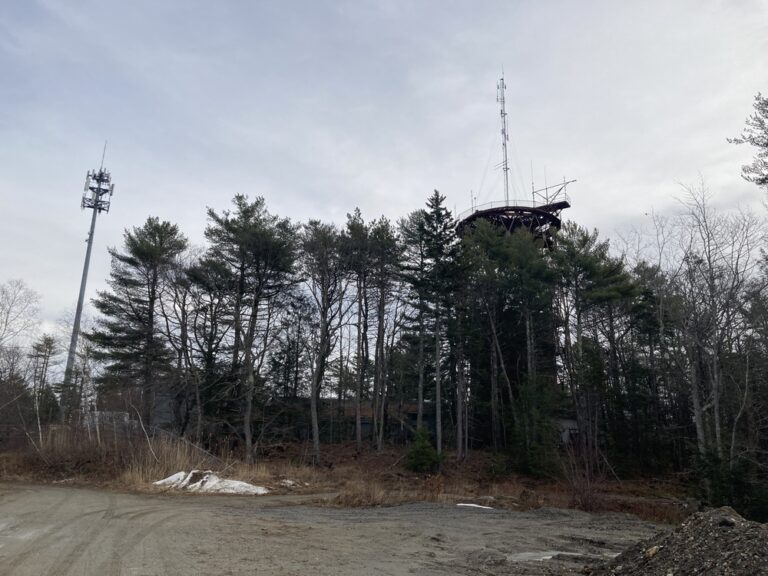 The radar tower in December 2020 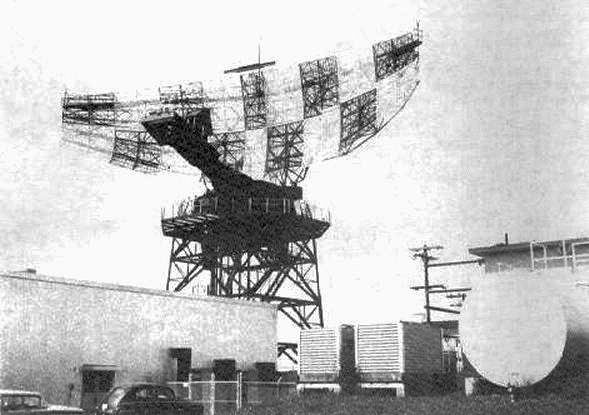 An AN/FPS-24 height finding radar. There were 2 in West Bath. 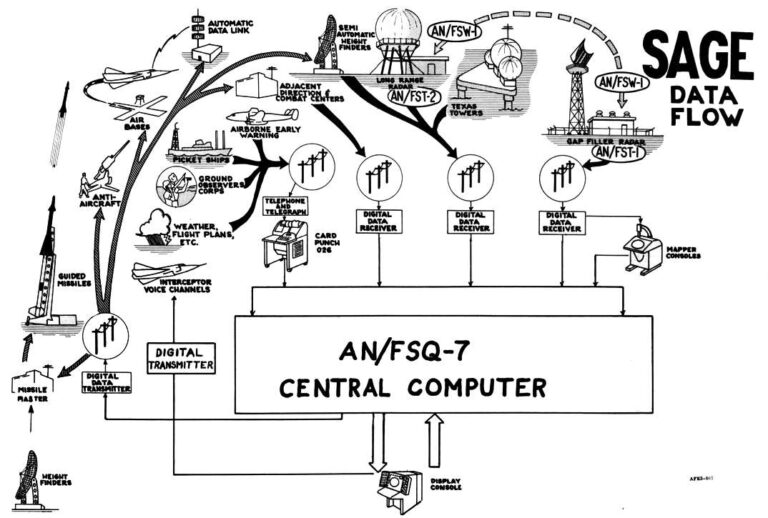 A diagram of the data flow for SAGE. 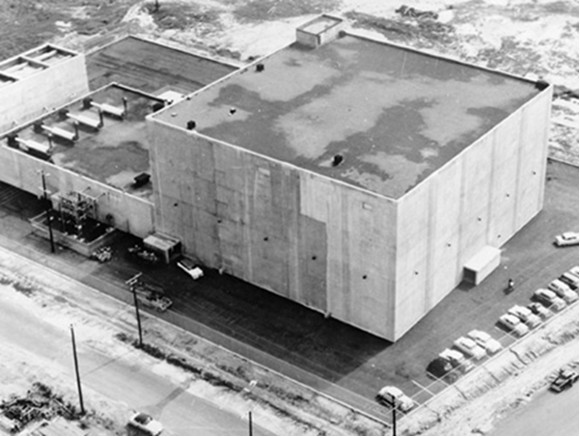 The Topsham DC-05 blockhouse from the air 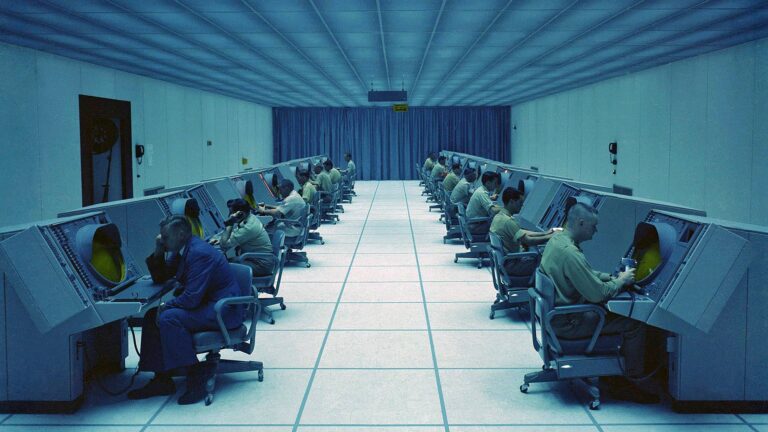 The "blue room" - where the operators worked at their consoles. Looks like something Kubrick would have filmed. 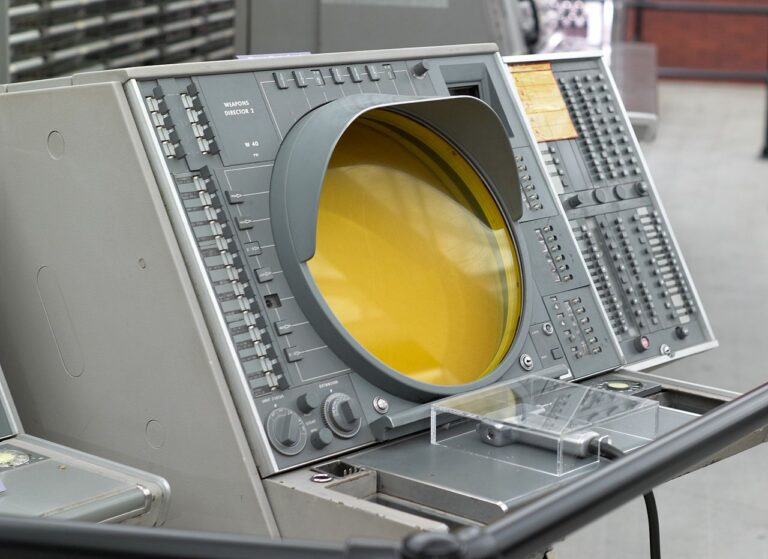 A close up of a console. Cigarette lighter and ashtray bult in at bottom left. 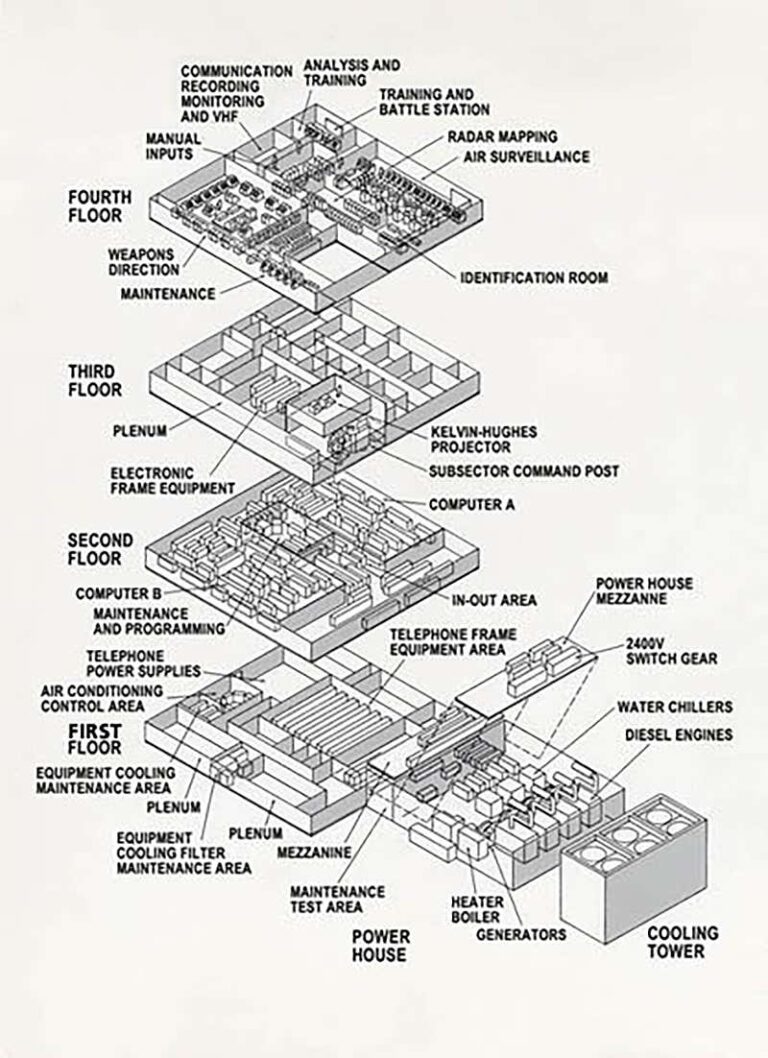 A diagram of a 4-story DC blockhouse 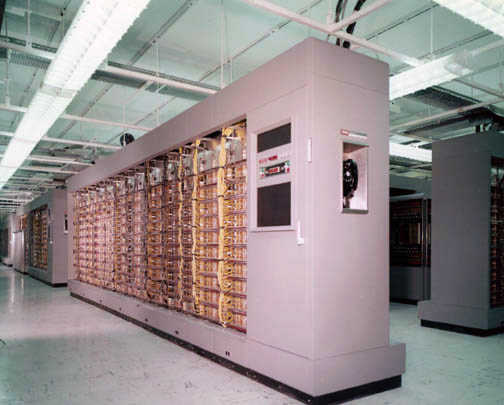 Part of the FSQ-7 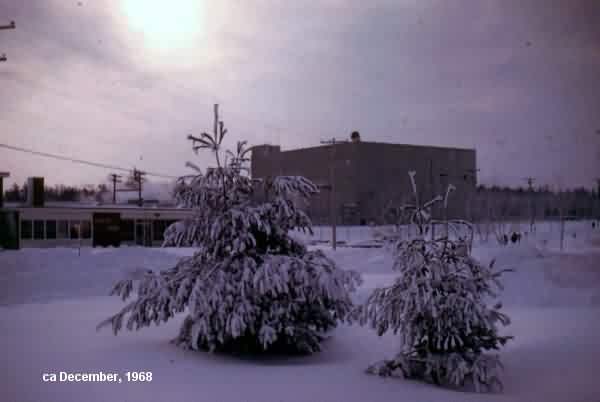 The Topsham DC-05 blockhouse in winter 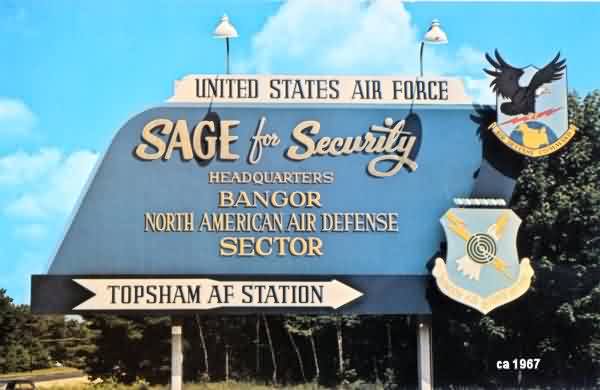 The entrance to Topsham AFS on a postcard 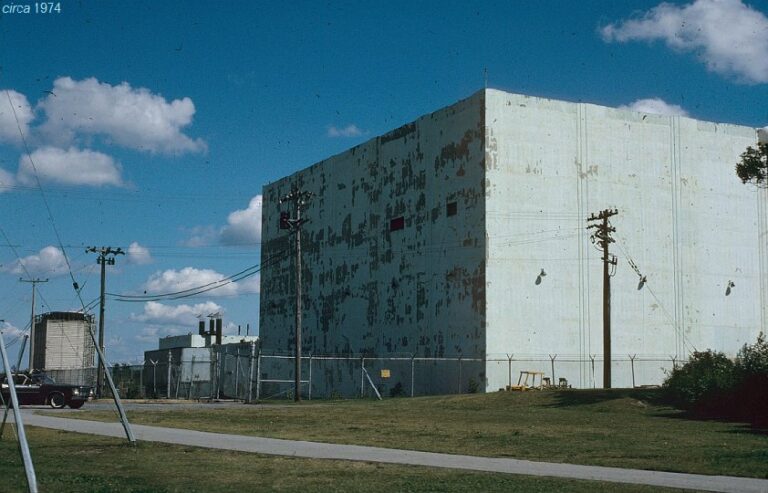 Topsham DC-05 blockhouse before being demolished 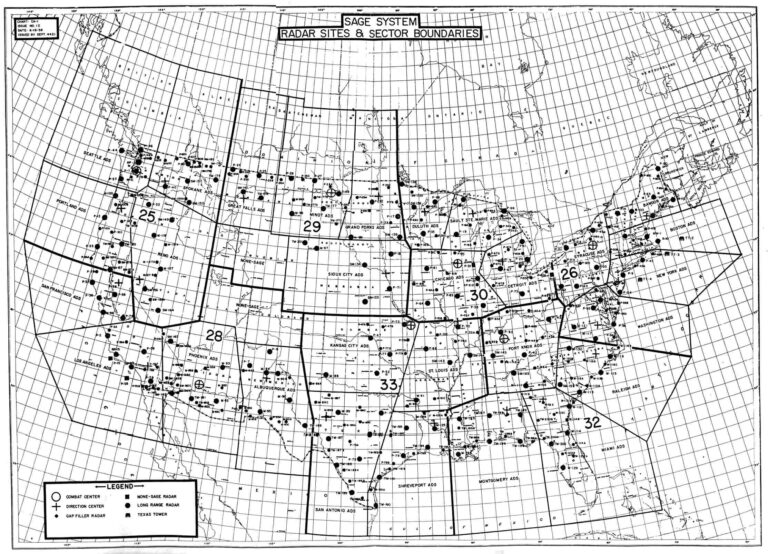 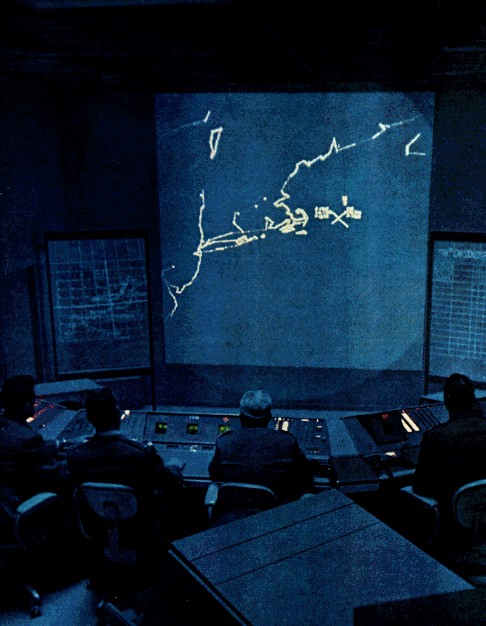 The big screen in the control room 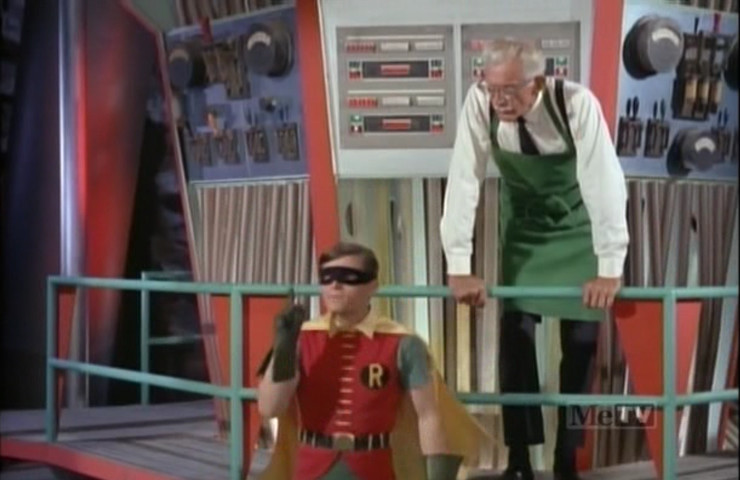 An FSQ-7 appearance in Batman 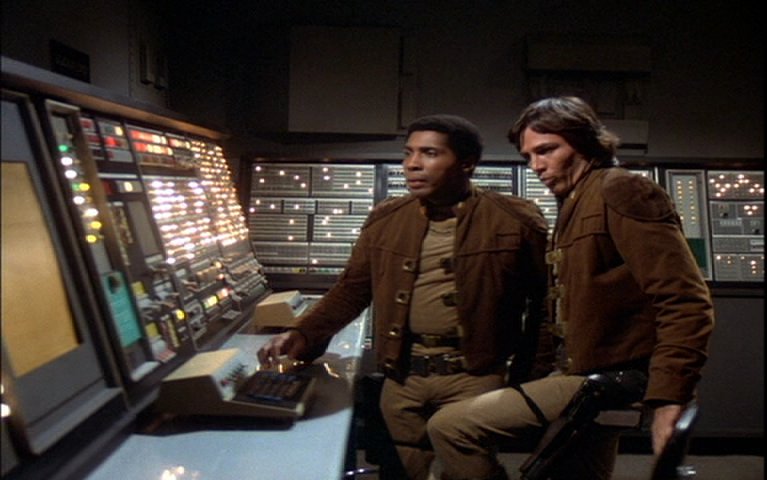 Maine Civil Defense in the 1950s