Over ten million Americans, including one of every five New Englanders, are of French Canadian descent.  And over 1 million still speak French at home.  Their Quebecois ancestors left home looking for a better life, often found their way to mill towns all over New England, and built “little Canadas.”

Quebec was largely an agrarian economy and by the mid 1800s, most of the “good” farmland was taken. Growing seasons were short, credit to buy land was hard to get, and prices for crops kept dropping. Quebec farmers faced poverty and not a lot of job options. At the same time, U.S. industrial growth was greatly outpacing Canada and so many Quebecois needed to either head South across the border for work or move away to cities in Canada (which they also did).

In the U.S., the Civil War stalled mill growth because the Union blockade of southern ports had dried up the supply of raw cotton needed for the textile mills to operate. Many mill workers left or took jobs in different industries to make ends meet. Then when the war ended, and cotton was once again available, the mills needed to find replacement labor.

Companies started advertising and even sending agents to Quebec towns to aggressively recruit workers, promising housing and wages – and the “Great Migration” (aka the Quebec diaspora) was on.

French Canadians headed for larger towns like Lowell, New Bedford and Fall River (in Massachusetts), Manchester (in New Hampshire), Woonsocket (in Rhode Island), and Lewiston (in Maine) – places that are now well known as being “French.”

But they also settled in smaller mill towns and their stories mirrored those in the bigger towns. Maine towns included Biddeford, Waterville, Rumford, Sanford and Brunswick.

Cotton mills opened in Brunswick during the early 1800s and were staffed with English (local) and Irish workers. Steam train service came to Brunswick in 1849 which made the movement of labor much easier. Then, when the Civil War ended, the recovering textile and shoe manufacturing industries needed to fill the jobs vacated before the war. The Brunswick cotton mill, which had recently been restarted and expanded by the Cabot family, was the largest mill in the area and the primary reason most of the French Canadians migrated to Brunswick.

The mill sent agents to Quebec to recruit and the French started arriving. Once settled, the men often then called for their wives, sisters, brothers – entire extended families – to join them. They could get on a train in Quebec City in the morning and be in Brunswick that same day due to the improved train service. This “chain migration” led to the creation of a tight knit community in the same neighborhood in Brunswick.

11 Hour Days in the Mill

Life for these immigrants centered around the mill and the neighborhood along the Androscoggin river. They worked 11 hour days in the mill churning out spindles of spun cotton yarn. The highest paid men could make $10/week while women earned a few dollars less. Children, as young as 7, worked in the mill as well. Child labor laws were nonexistent and every dollar helped the families.

Because they were partially paid in company scrip, they had to spend it in the Cabot company store. Since the mill also rented their rooms and sold them their heating oil, these families were tightly bound to the mill.

The Cabot Mill built 75 tenements along the Androsoggin on Mill Street – a stone’s throw from the mill itself – and the French kept them filled. Families, often with 10 children and various relatives, crammed into the block houses. Each tenement held up to 100 people and there were 75 mill-owned tenements in the neighborhood. The neighborhood was teeming with life and French was the only language passersby would have heard.

A Breeding Ground for Disease

Throughout the 1800s, downtown Brunswick’s streets were unpaved and had horrible surface drainage. There were no sewer lines and residents’ wells were easily contaminated. The area down from the college (where the green is now) was a fetid swamp. The whole town stank.

In Little Canada, the conditions were magnified. Their outhouses were cleaned once per year and often overflowed. Livestock was penned up between the houses. Sinks drained short distances into the yards and often back into the basements. Bones and food scraps were thrown into the yards while the livestock milled around. People were crammed in. And in the middle of this stinking mess were the wells where their drinking water came from. Conditions were perfect for disease.

Diptheria and the Newpaper Editor

In 1881, there was a typhoid epidemic. And then 5 years later, between April and September of 1886, diptheria tore through Little Canada. When it was over, more than 150 French immigrants, many of them children, were infected and twenty-two died. Space was so limited that when a person was ill, it was next to impossible to isolate them. Sickness quickly spread.

This was largely unnoticed by the “English” in town until Albert G. Tenney, Bowdoin Class of 1835 and editor of the Brunswick Telegraph learned about the situation from a French doctor, Onesime Paré, who worked with the immigrant community. A series of articles were printed in the paper highlighting the horrible situation. With each successive article, Tenney railed on the Cabot family and its local agents for the conditions it perpetuated. He wrote:

“the Cabot Company has no … mercy for the poor slaves bound to it by the necessities of existence, they dying by slow poison germinated in the filth permitted by the company’s home management to flow over the soil in reeking streams from the vaults of the boarding houses …”

Tenney’s efforts got wider media coverage (including the NY Times) which put pressure on the mill. Then, diphtheria started spreading uptown to the “natives” which got everyone’s attention. The mill was finally forced by the state to do some cleanup and the town of Brunswick began laying down sewer lines. Living conditions marginally improved in Little Canada.

In the mid-1850’s, the Know Nothing Party gained significant power in America. They were staunchly anti-Catholic and anti-immigrant. At the time, their targets were often Irish and French Catholics – and Brunswick had both. One local group of Know Nothings famously burned down the Old South church in Bath where Irish Catholics (and French) attended. The Know Nothings helped to raise anger and distrust of immigrant Catholics all over New England.

When the French first arrived in Brunswick, the locals thought of them as temporary labor brought in by the mill to fill a need, expecting that they wouldn’t stay long. But when months turned to years and more French arrived, the locals got angry and they felt like their town was being overrun. With the Know Nothing’s prejudice fueling them, they treated the newcomers with fear, distrust and hate – and even as something less than human.

English townsfolk called them names, vandalized homes in Little Canada and picked fights when they tried to walk uptown simply to get mail from the post office. When they organized strikes at the mill, the mill issued eviction notices for their housing, shut down the company store that they were forced to shop at, and encouraged local stores to refuse service to them. They were mistreated and slandered everywhere they went.

There wasn’t a “French” church in Brunswick that they could attend, but there was the St. John’s Catholic church which opened in 1882. The French started attending there and initially got pushback from the Irish parishioners. But the French outnumbered the Irish and started exerting their influence. They eventually imported a French priest to lead mass in French. The new priest opened a school in 1893 a block from Mill Street run by 8 “Sisters of Sion” imported from Paris (la Congrégation des Dames de Sion). The church and school quickly outgrew their location so a larger church and school were constructed on Pleasant Street.

As the 20th century turned, the French community slowly integrated into the Brunswick community. French married Irish and began to move out of Little Canada. They opened shops, took jobs outside of the mill, and some moved out of town to work farms that they purchased. Their children learned English in schools and residents became naturalized in order to better fit in – even if they still spoke French at home.

When the mill closed for good in 1955, Little Canada slowly started to disappear as shops closed or changed hands. Then when the Route 1 underpass was built in 1961, most of the remaining tenement buildings on Mill Street were destroyed to make room for the road. But by then, it didn’t matter. What had once been Little Canada was no longer the heart of the French community in Brunswick. The families, their food, their traditions, their clubs and religion had long ago become intertwined with the very fabric of Brunswick. 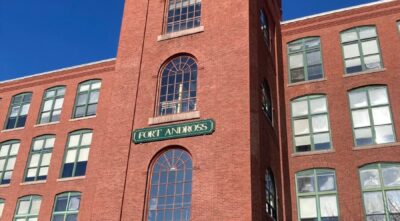 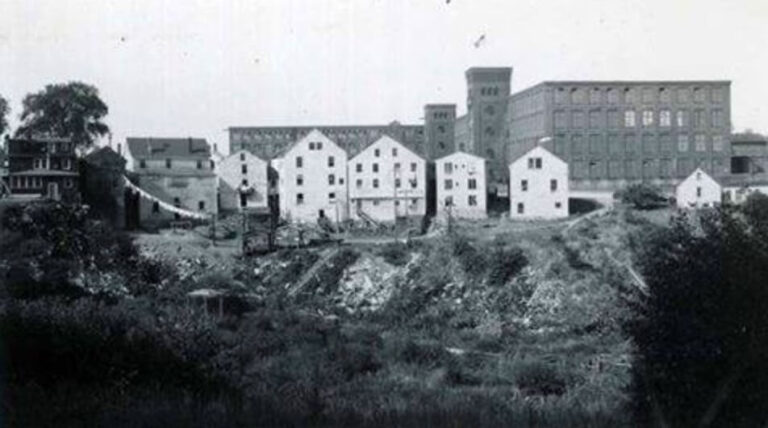 View of the tenements with mill behind, year unknown 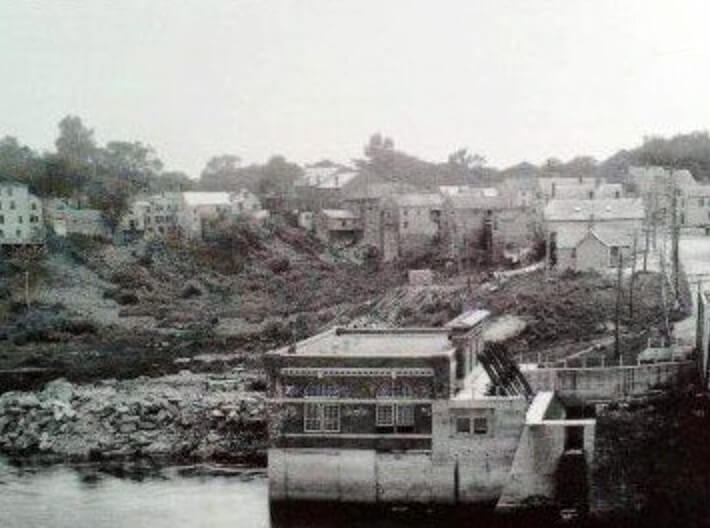 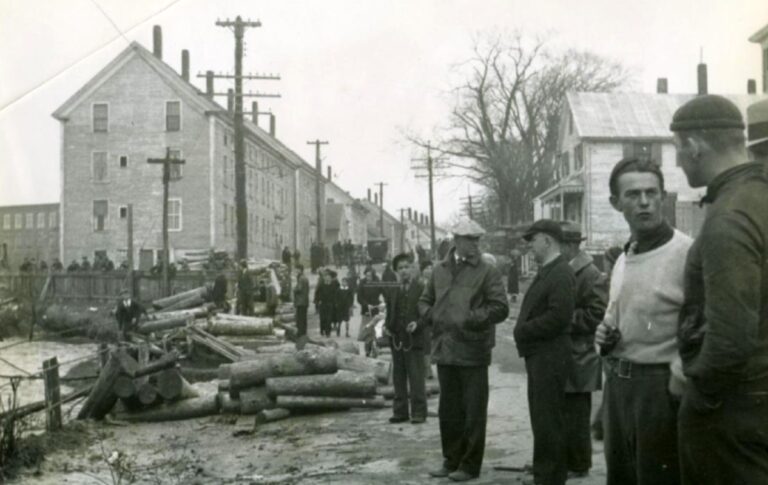 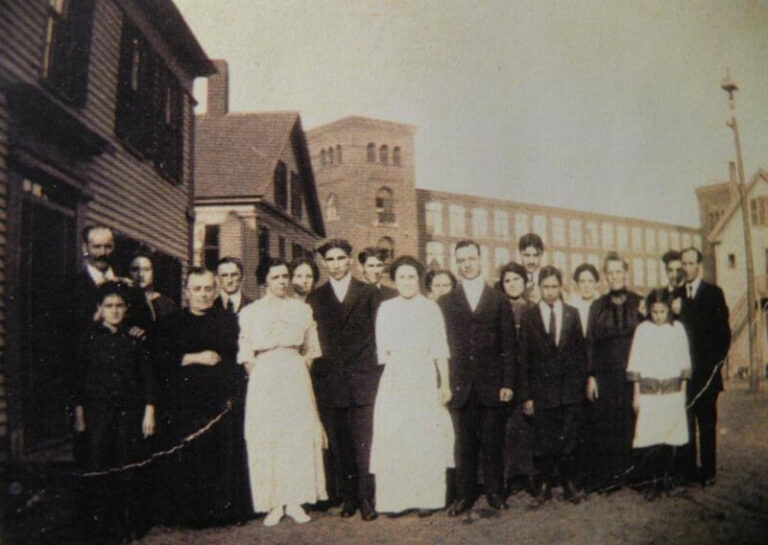 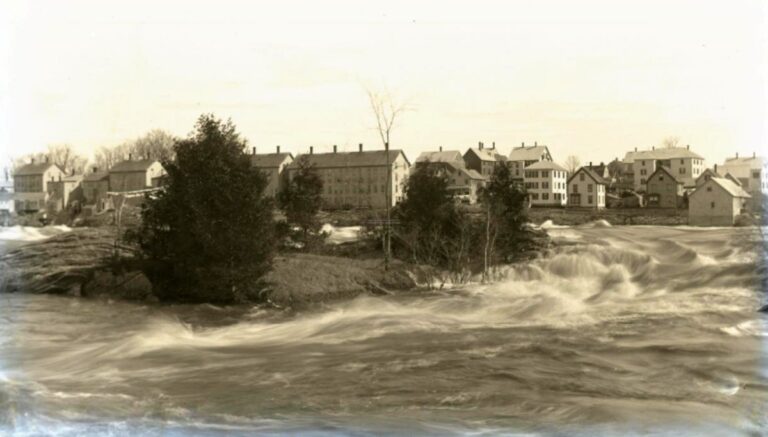 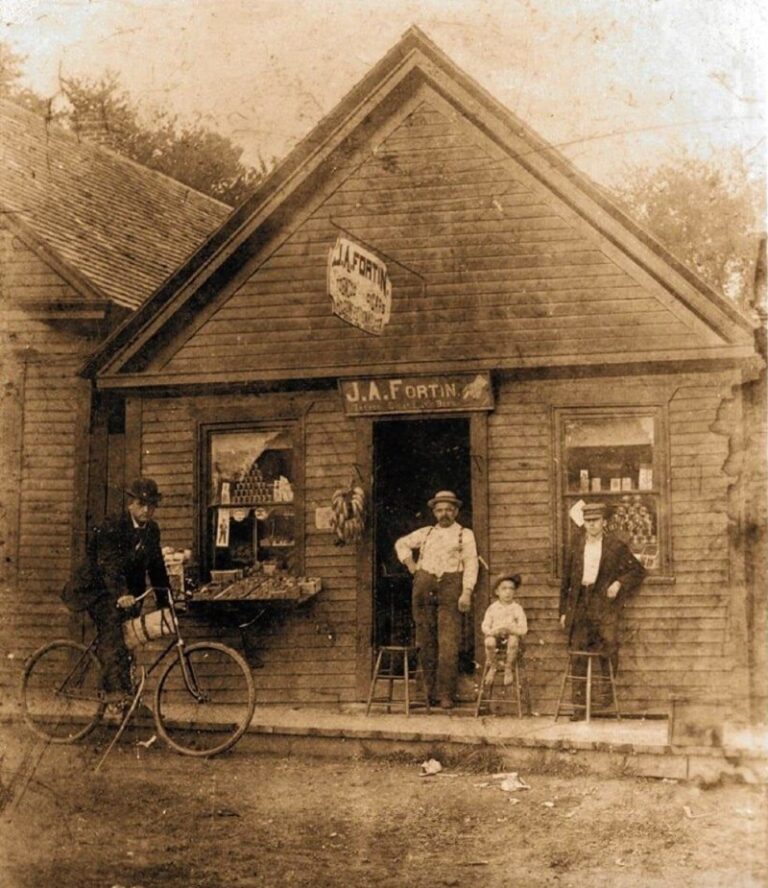 1890, Fortin's Variety on corner of Mill and Maine street - where The Great Impasta is 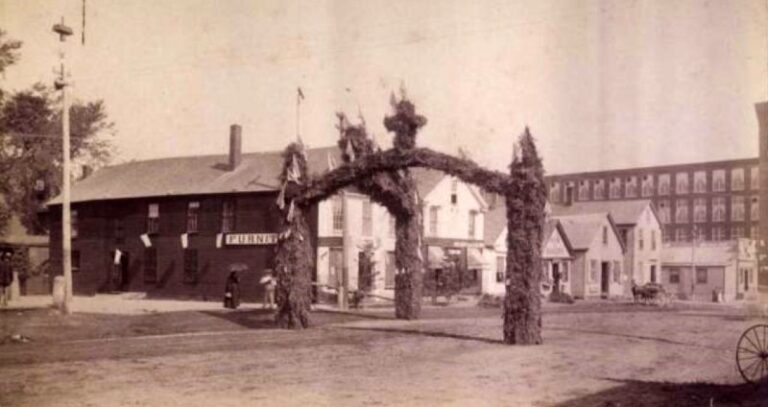 Decorative arch on the corner of Maine and Mill Streets for the celebration of St. John's Day, June 24, 1894 by the Catholic Society of St. John the Baptist. 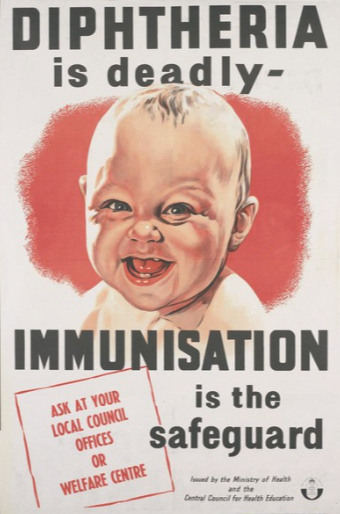 Diphtheria poster from the UK. The vaccine wasn't developed until 1923. 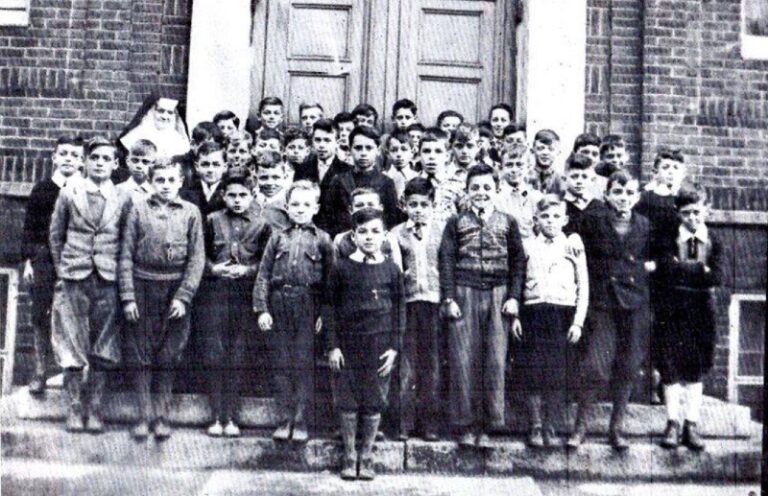 One of the many French bakers - Tondreau's Bakery on Mill Street, 1922 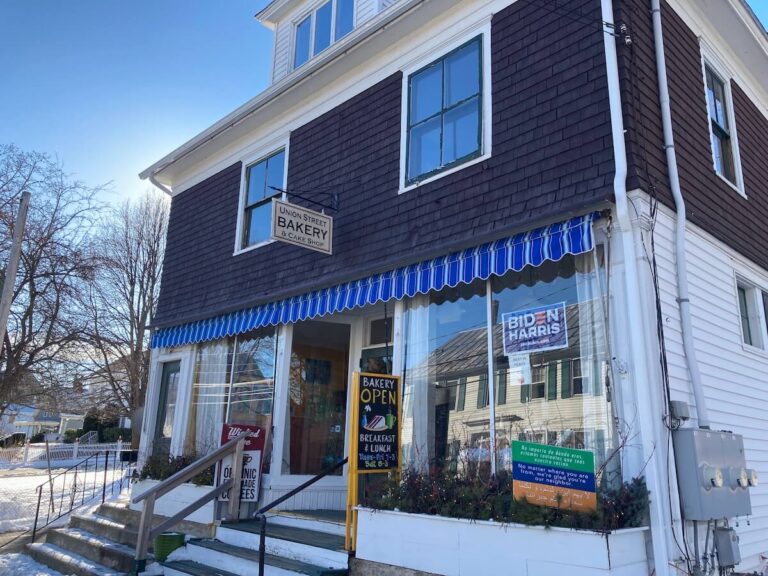 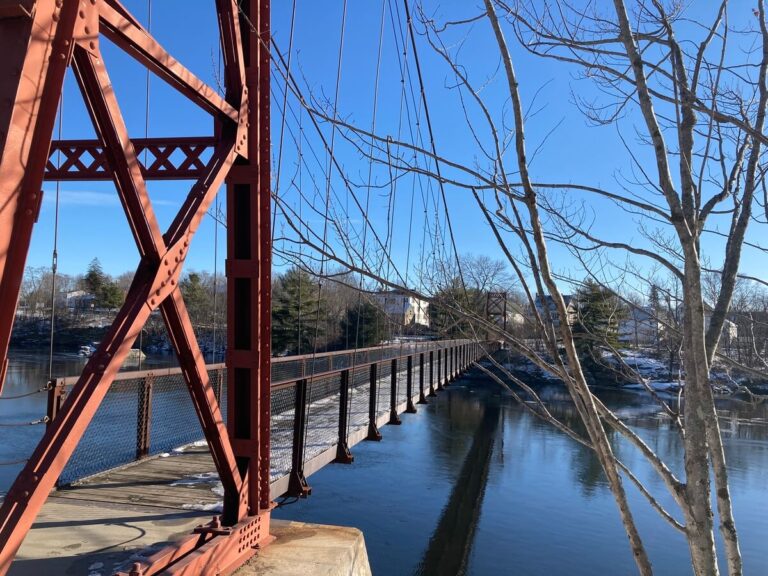 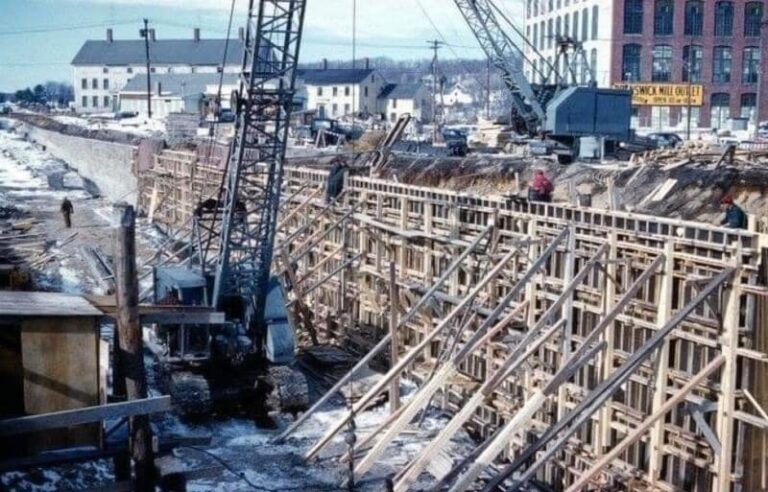 When the Route 1 underpass was built, most of the tenements were torn down 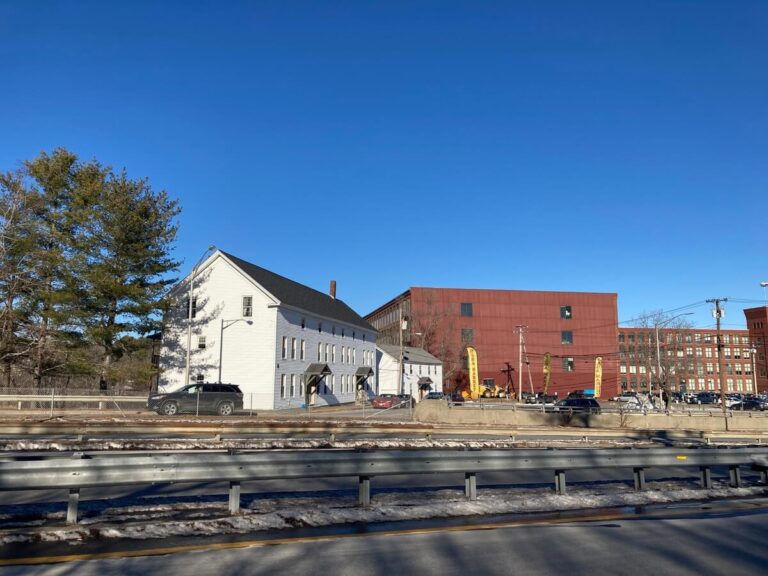 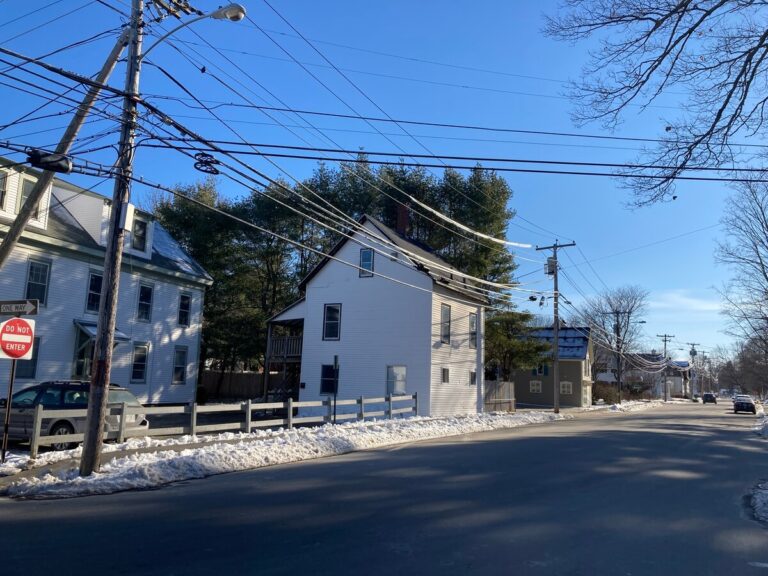 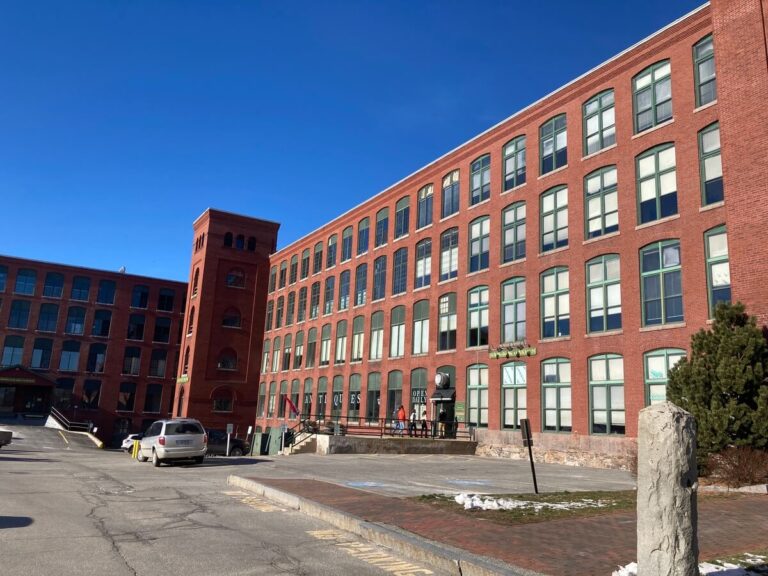 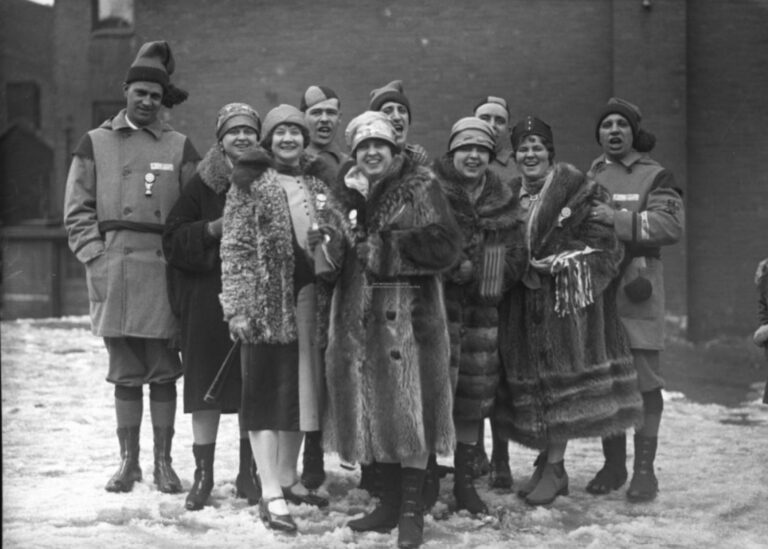 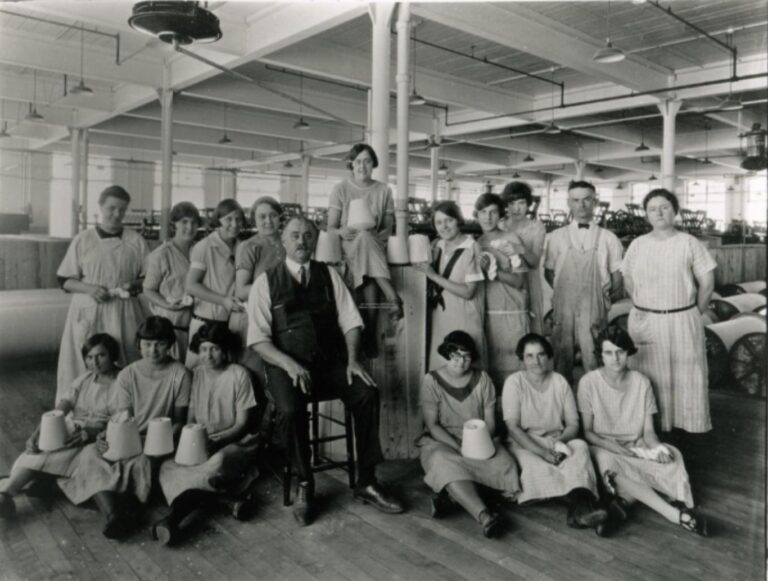 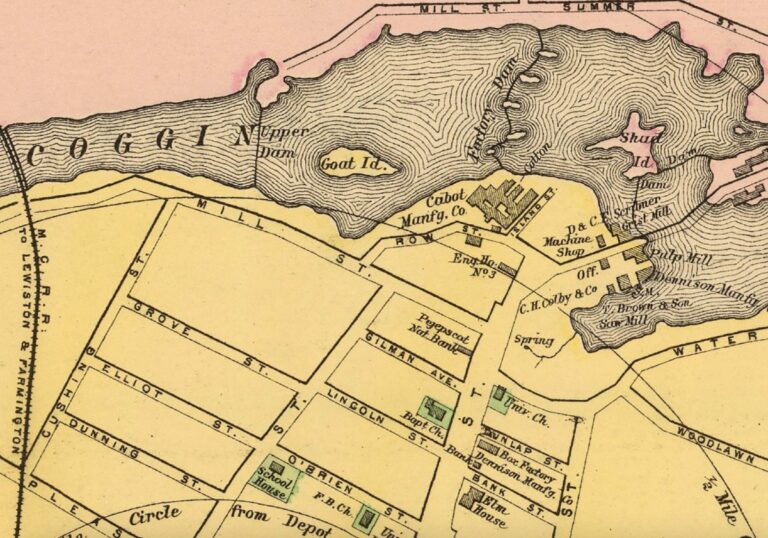 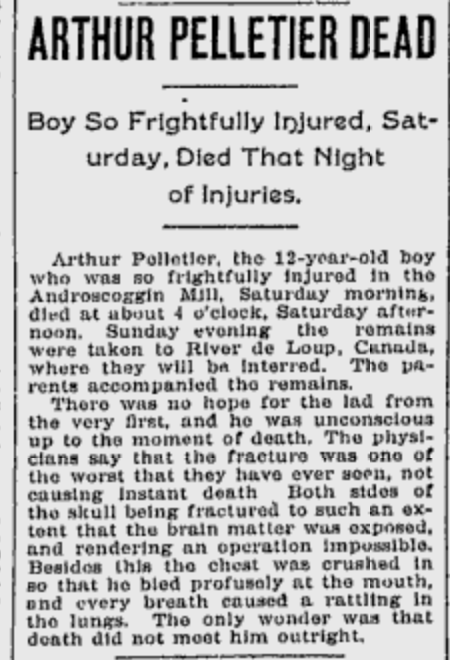 A 1906 newspaper story from Lewiston about a French Canadian boy who died from mill injuries.
SOURCES & CREDITS: