If you think of the 1950s, images of sock hops, coonskin caps, drive-ins and Elvis probably come to mind. But if you dig a little deeper, you’ll find some sad memories as well: Joseph McCarthy’s “red scare”, “duck and cover” bomb drills, and people standing on roofs desperately watching the sky for Russian bombers. Those were just a few of the ugly truths that America faced as it tucked into the long Cold War.

Tensions were extremely high and the U.S. responded not only with a massive increase in the military complex, but they got the citizens (mostly women) involved as well.

How We Got There

After World War II, the rather uneasy alliance between the West and the Soviet Union began to unravel. The Soviets began installing puppet regimes in the bordering countries and fortifying them against possible German (and Western) attack. The U.S. and allies were rightfully concerned that the Soviets would dominate central Europe and so they formed the alliance called NATO.

Then in 1949, Russia tested its first nuclear bomb and it scared the pants off the rest of the world. Russian and Chinese-backed North Koreans invaded U.S.-backed South Korea in the summer of 1950 and a global war became even more imminent.

President Harry S. Truman felt that postwar prosperity had softened the U.S., that the country wasn’t vigilant, and that the military was vastly underprepared.  Visions of Russian bombers caused fear to ripple through the country. The Red Scare was part of daily life.

To defends agains any Soviet aggression, the U.S. built a large network of offshore and onshore radar facilities to identify any attack from the Soviets so that a response could be mobilized quickly.  These early installations, while state of the art, required time-intensive manual plotting by operators.   There were other issues: this type of radar had trouble identifying low-flying aircraft due to “ground clutter,” there were gaps in the radar coverage, and the Russian jets flew much faster than the prop planes of World War II so any identification delays would be fatal.

The radar needed to get more accurate and be automated by computers, and that story is over here. So while waiting for the scientists and engineers to solve that problem, the government turned to the patriotic population for help.

During World War II, the limited U.S. radar network was supplemented by the Ground Observer Corp.  This volunteer network was formed to help identify low-flying planes that slipped past the radar network.  That program ended when the U.S. declared victory but was restarted a few years later as the Cold War picked up.

This 2nd phase consisted of 750,000 recruited volunteers, mostly women aged 7 to 86 years old, working in shifts at over 16,000 posts all over the country.  Their task was to memorize airplane types by sight and sound and stand sentry on high ground scanning the skies for enemy aircraft.  The program was renamed “Operation Skywatch.”

“This is a commonsense precaution in which Americans can serve proudly and in which the fellow citizens of the watchers can derive satisfaction.”

His language contrasts with the fear-mongering campaign that accompanied it.

Radio spot: “It may not be a very cheerful thought but the Reds right now have about a thousand bombers that are quite capable of destroying at least 89 American cities in one raid…. Won’t you help protect your country, your town, your children? Call your local Civil Defense office and join the Ground Observer Corps today.”

Each member of the GOC was trained to identify aircraft so they could distinguish between commercial and military aircraft. Each observation post, typically setup on a rooftop, tower, or hill typically had a single observer with binoculars, a notepad and a see-through plastic card that helped them identify the target. Each post either had a phone or there was a phone nearby. Their task was simple: if they saw something suspicious, they were supposed to immediately call it into the local “filter center.”

The filter centers, which were staffed mostly by Women’s Army Corps volunteers, would cross-reference the reported plane with scheduled civilian flights. If they couldn’t identify it, they would report it to the Air Defense Direction Center, which would confer with local radar and deploy pilots if they needed to investigate.

This program operated until 1958 when computer-aided radar networks rendered them obsolete. There was never a single enemy plane spotted over the U.S. during that time.

But what if there was an attack?

If somehow, a Soviet bomber slipped through the radar network (and the ever-vigilant Ground Observer Corp), and managed to drop a bomb somewhere, the people of Maine needed to know how to respond.

The U.S. needed some P.R. so they created some campaigns to unify citizens and standardize responses at the family and local levels. Enter “Bert the Turtle”, who taught children how to “duck and cover” in case of danger. While it might seem silly to duck and cover, it has been proven that it could mean the difference between life and death – even during a nuclear attack.

A famous short film was released in 1952 which was seen by schoolchildren and adults alike. The basic premise was to shelter immediately where you were.

A real live Maine “Bert” helped promote civil defense specifically in Maine in the late 1950s. C. Bruce Wright, public relations director of the Maine Civil Defense and Public Safety Department, got his hands on a 50-pound North African sea turtle from a Brunswick doctor – who himself had gotten it from sailors at Brunswick Naval Air Station. He put Bert to work through public appearances and ad campaigns. From all accounts, he was a big hit with the little ones. One notable appearance by Bert was on a float at the Rockland Seafood Festival in the late 1950s accompanied by a sign that read “The Original Bert the Turtle lived 1,000 years because he knew enough to Duck and Cover. How about you?”

So what should everyone do after a bomb drops (and they presumably survived because they both ducked AND covered)? Well, the best way to learn how to manage the largest emergency that ever occurred would be to go to “school” and take classes.

The Civil Defense Staff College (CDSC) was started in 1951. It is now known as the Emergency Management Institute (EMI) which supports FEMA. Then, like now, the goal of the CDSC was to “improve the competencies of U.S. officials at all levels of Government to prevent, prepare for, respond to, recover from, and mitigate the potential effects of all types of disasters and emergencies on the American people.” In 1951, they were specifically worried about nuclear bombs and fallout.

Maine’s counterpart to FEMA is, of course, MEMA. MEMA was founded in 1949 and worked with the CDSC to run civil defense staff “colleges” across the state.

At these trainings, “students” would study evacuation plans, learn rescue techniques, first aid, and efficient methods of distribution of food and water. The students included politicians, members of local government, police and nurses. More often than not, the students were women.

In fact, over 70% of all civil defense workers at the height of the cold war were women.

Food Trucks: Then and Now

Fun fact: one of the food trucks is still in operation. It was restored by a restaurant called the Ocean Roll in Kennebunk and is still in use. They bill it as the “oldest food truck in the country.”

While the mobile feeding units were setup to feed the masses, the state was also hoping that housewives would prepare their houses in case of disaster.

To encourage people to build a stash of provisions to survive nuclear fallout, the Federal Civil Defense Administration (FCDA) launched an initiative called “Grandma’s Pantry,” based around slogans like

“Grandma was always ready for an emergency.”

This program was specifically geared towards women as housekeepers and protectors of the home front. They suggested that each house keep 7 days of food and supplies safe and ready.

They also suggested that you stock your car in case you couldn’t shelter at home.

In the very late 1950s, the focus of civil defense switched from sheltering to evacuation once the Soviets proved they could launch missiles (ICBMs) from thousands of miles away – and the U.S. would have earlier warning. The construction of the “Eisenhower” interstate highway system was begun to speed up evacuation. Quaint advertising programs like “Bert the Turtle” and “Grandma’s Pantry” were phased out, although there was a significant push to build backyard bomb shelters. But that is for another story. 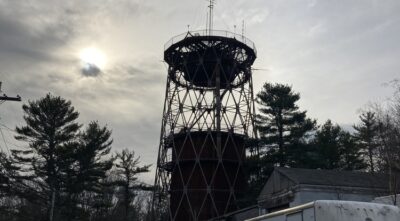 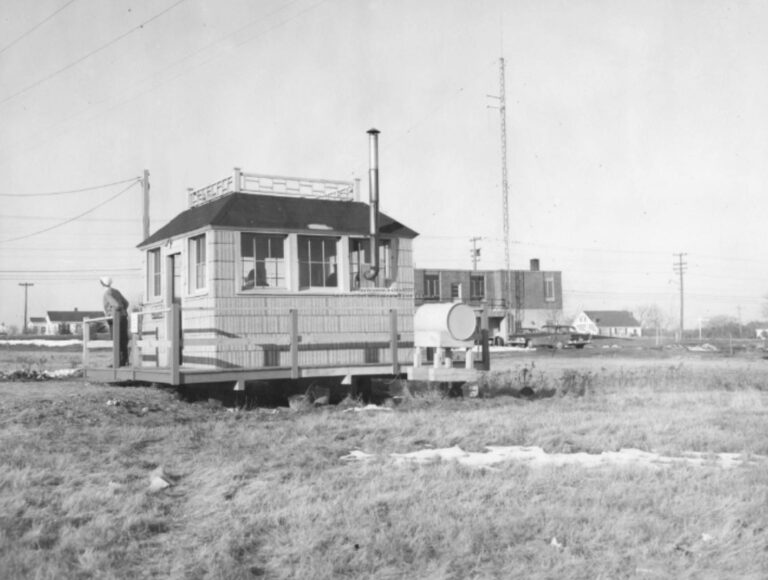 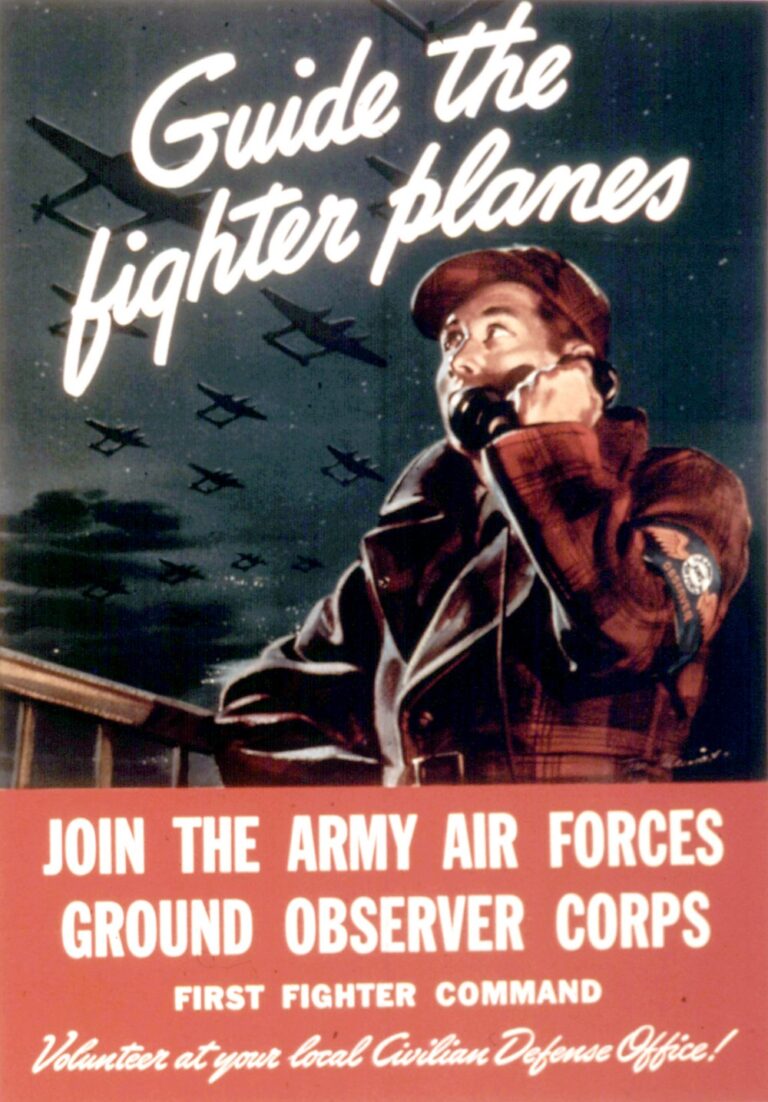 Advertisement to join the GOC 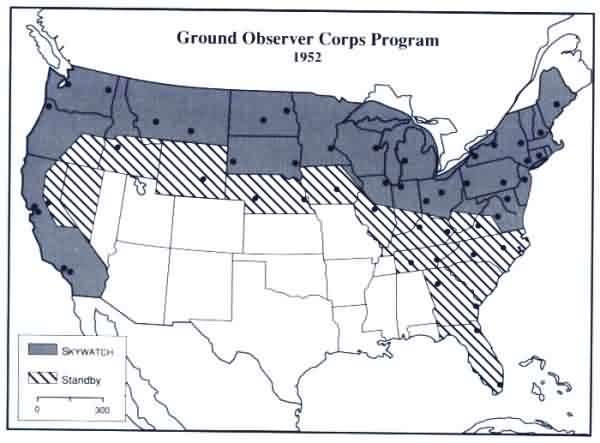 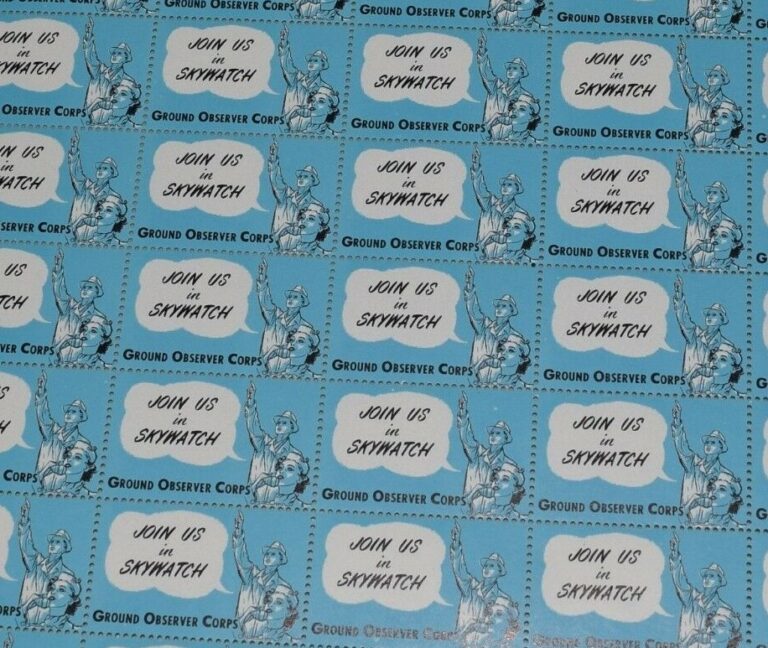 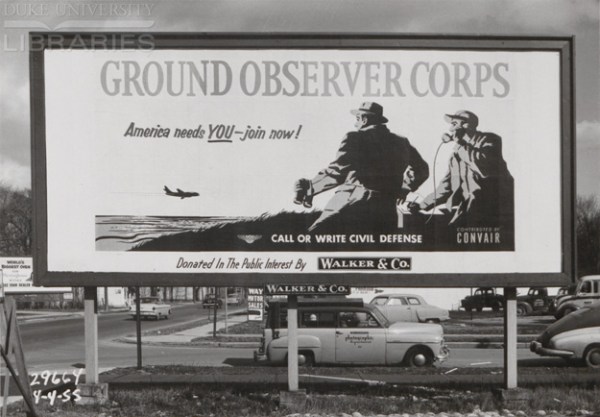 Billboard for the GOC 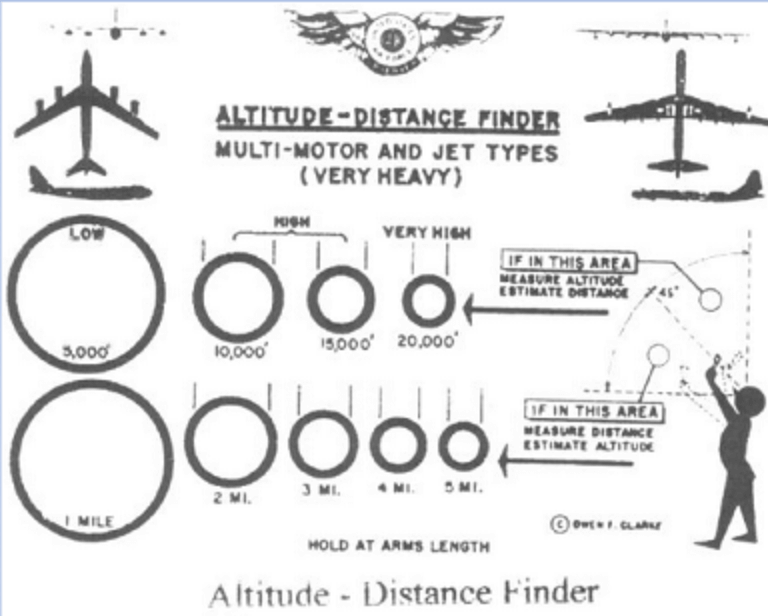 An altitude-distance finder used by the GOC. You hold the see-through credit-card sized card at arms length, line up the the aircraft in one of circles, and use it in your report 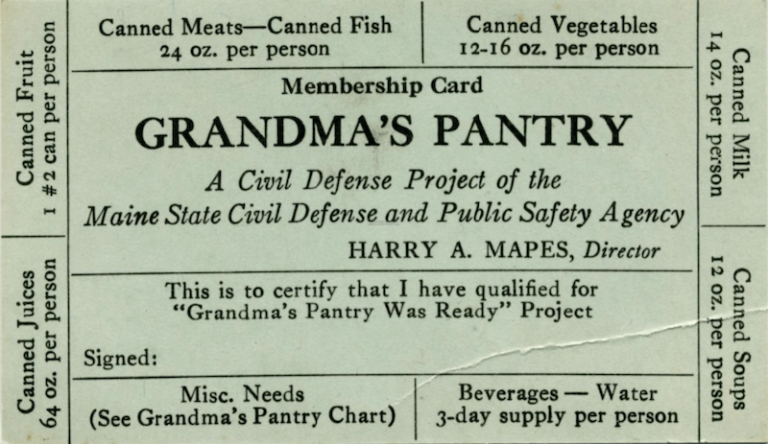 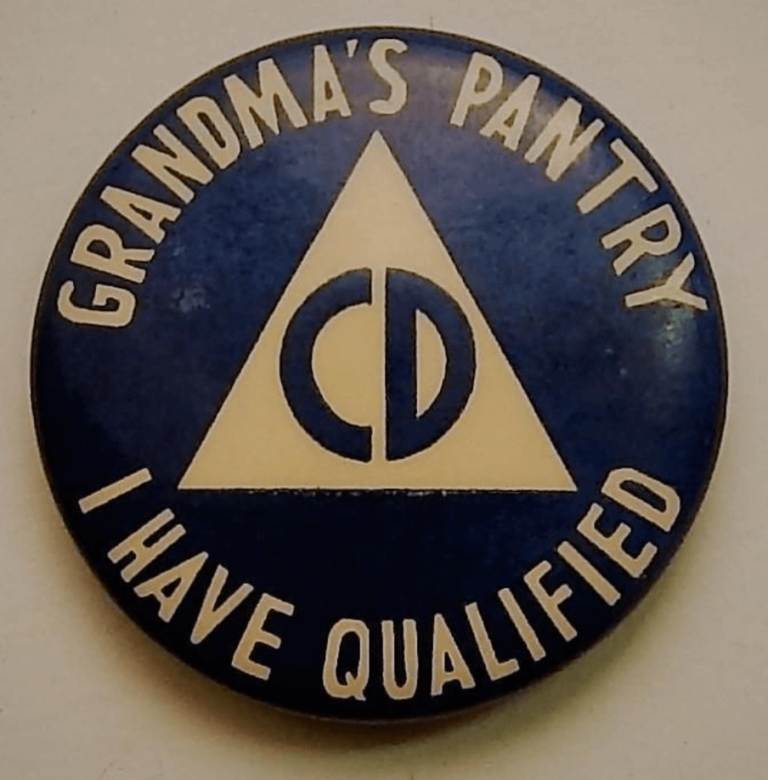 Grandma's Pantry pin - I have qualified! 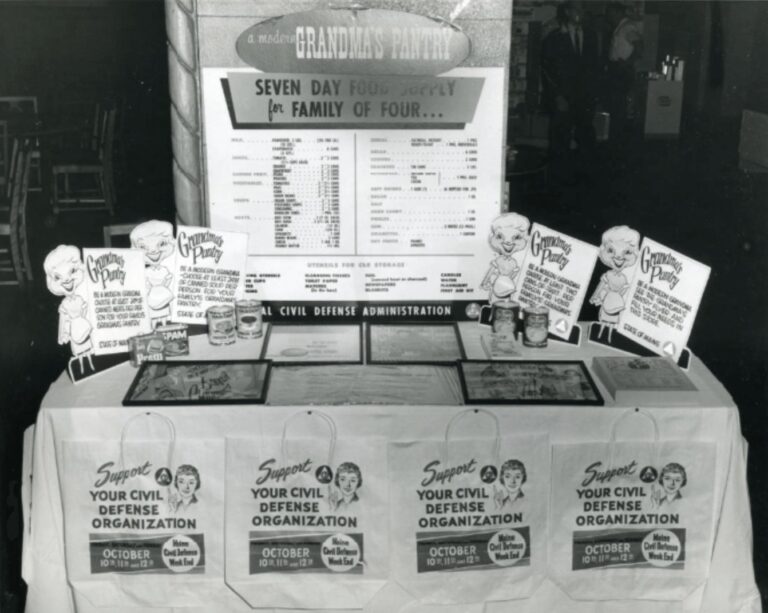 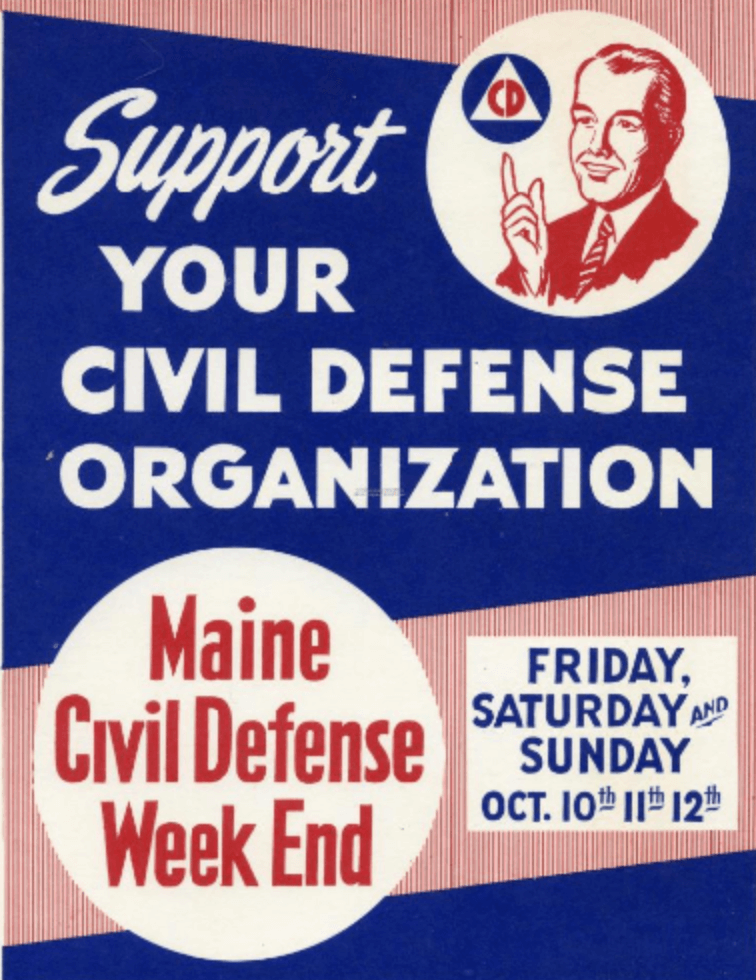 1958 advertisement for a civil defense weekend 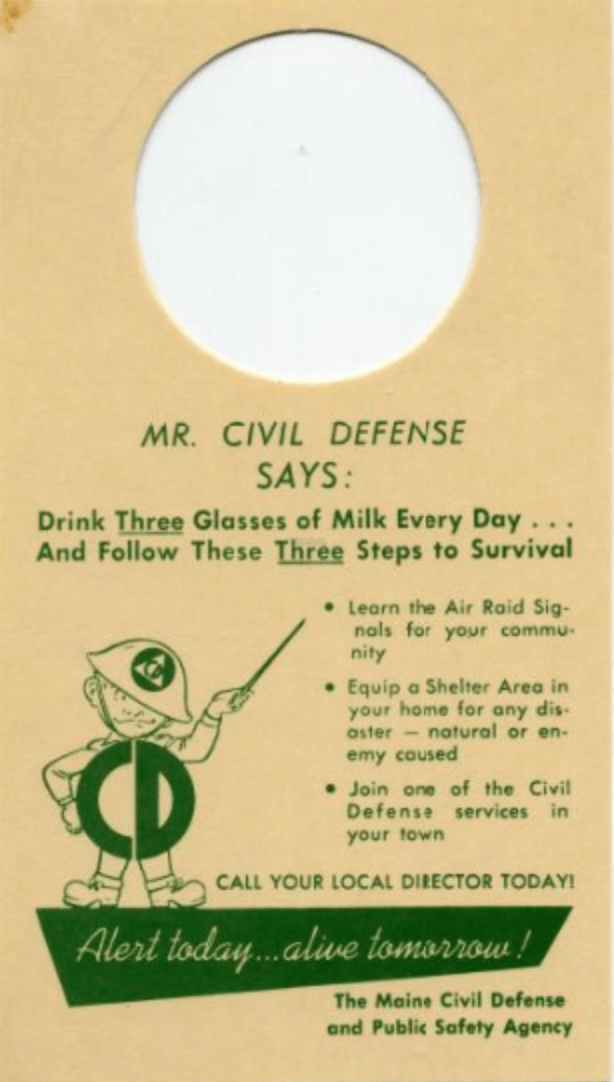 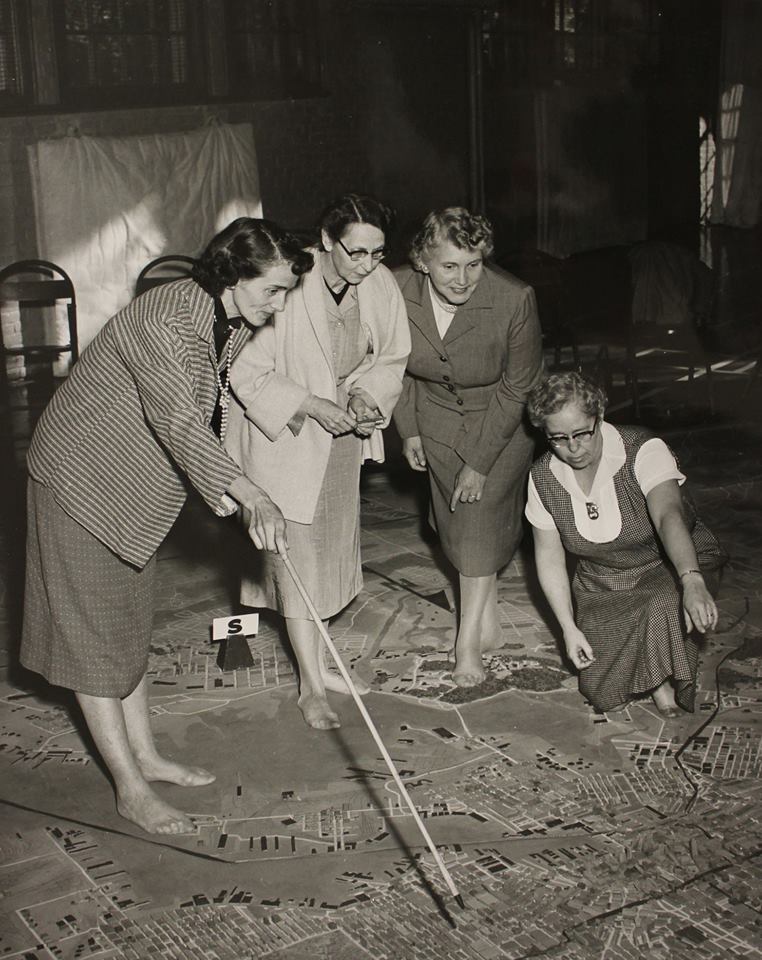 Women staff at Maine's First Civil Defense Staff College work with a 20- by 40-foot map of Baltimore that was used to locate assembly areas and evacuation routes, 1954 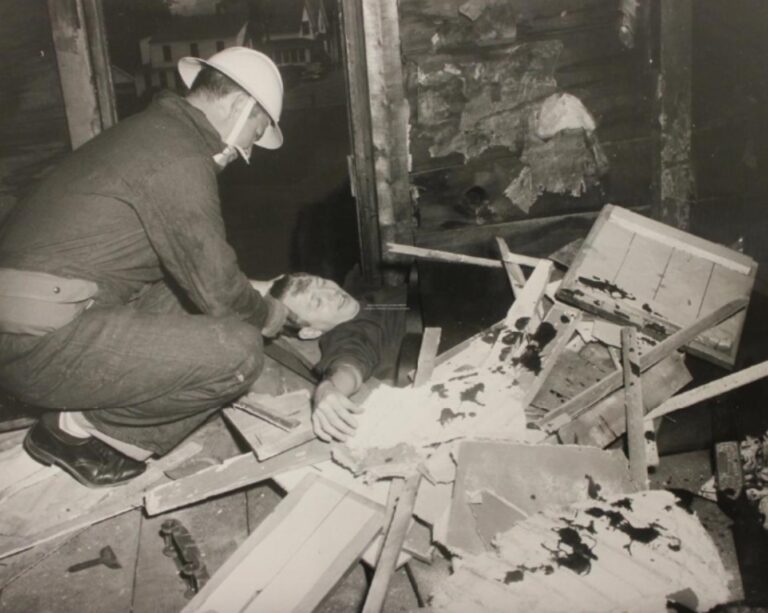 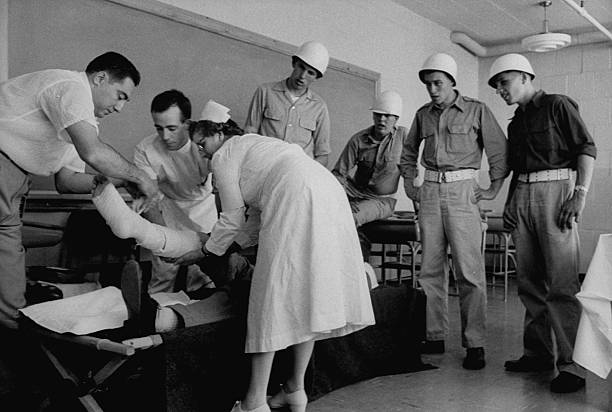 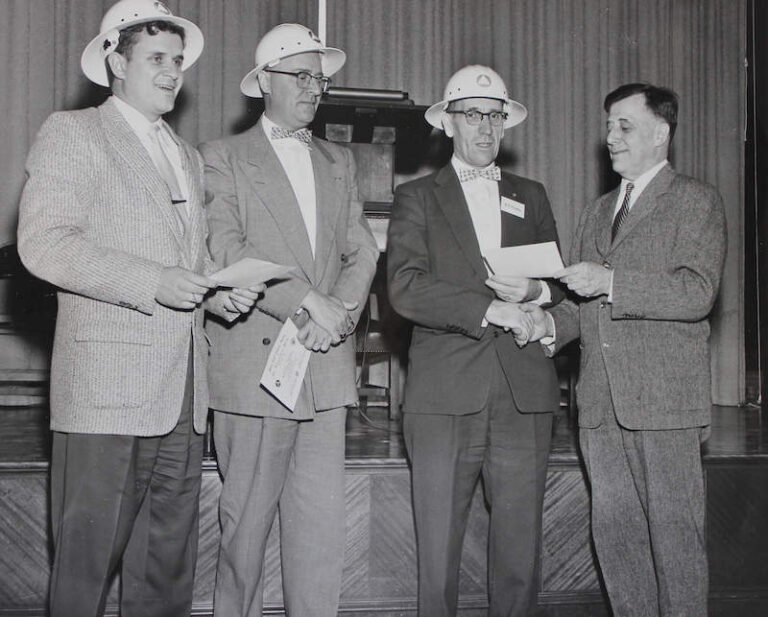 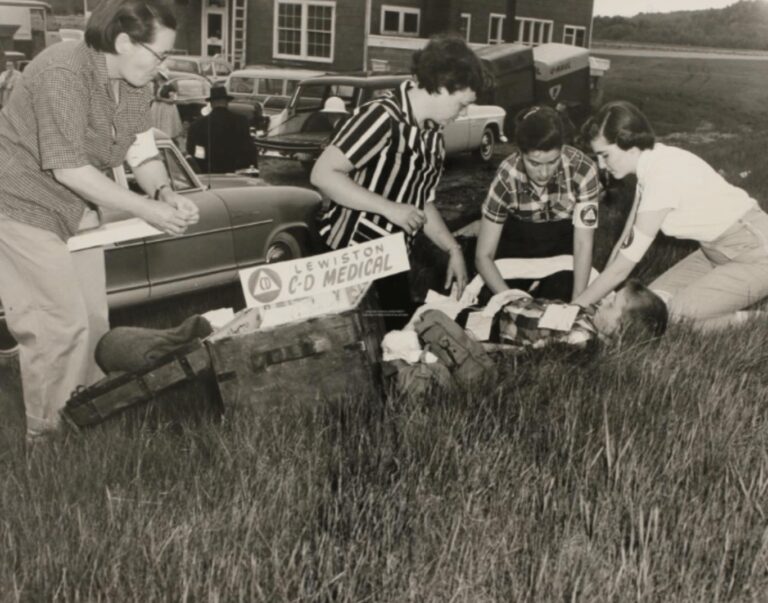 A first aid team from Greene treats mock casualties during Operation Mayflower at the Lewiston-Auburn Airport on May 26, 1957 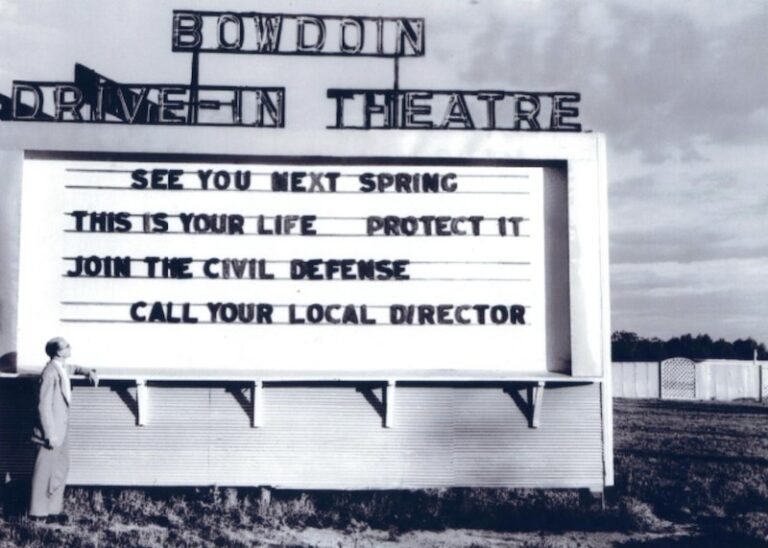 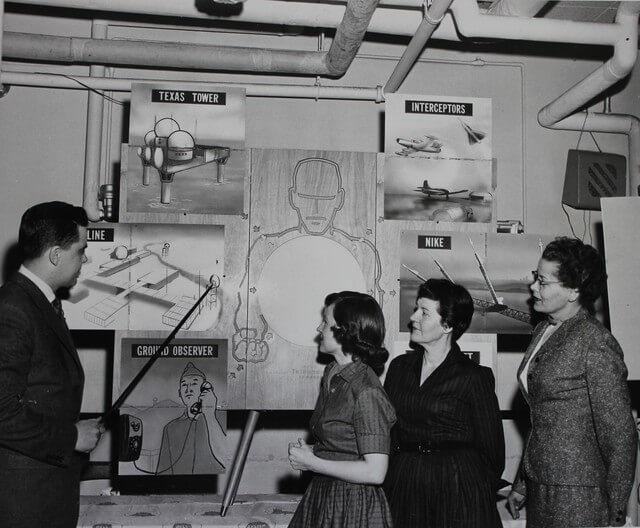 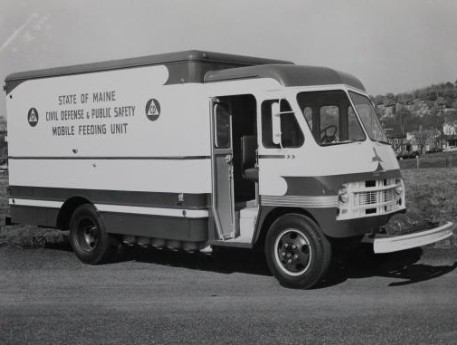 One of seven - Maine’s Civil Defense and Public Safety Agency Mobile Feeding Units, each equipped to feed several thousand on an emergency basis 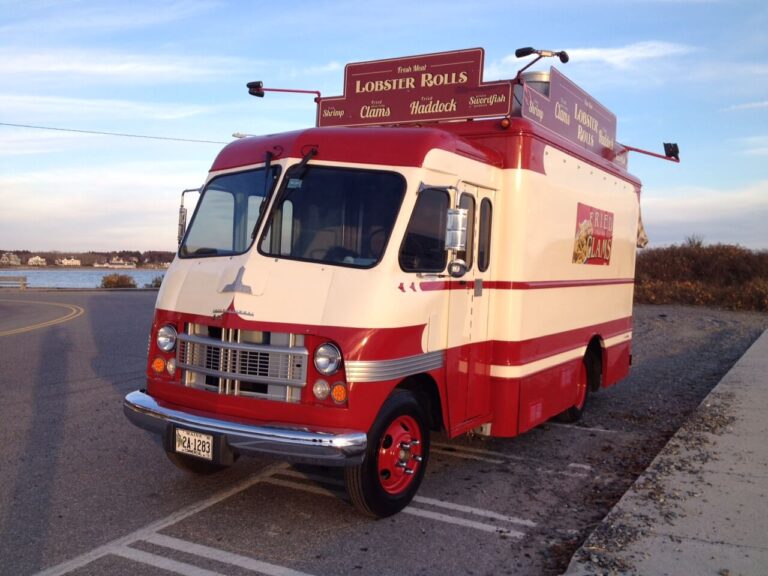 One of the original mobile feeding units has been repurposed as a food truck for the Ocean Roll in Kennebunk. 70 years later! 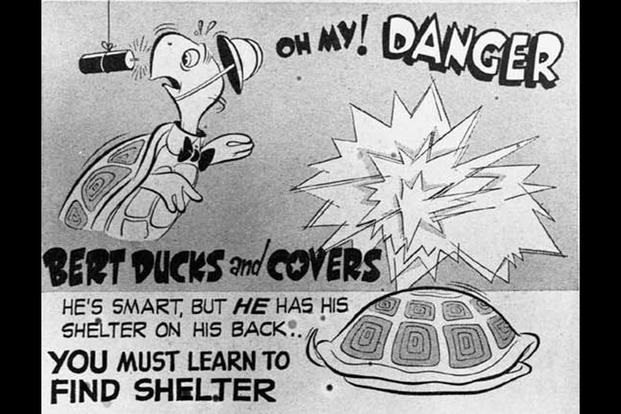 The symbol for a national Civil Defense promotional effort was Bert the Turtle, who taught children how to "duck and cover" in case of danger. 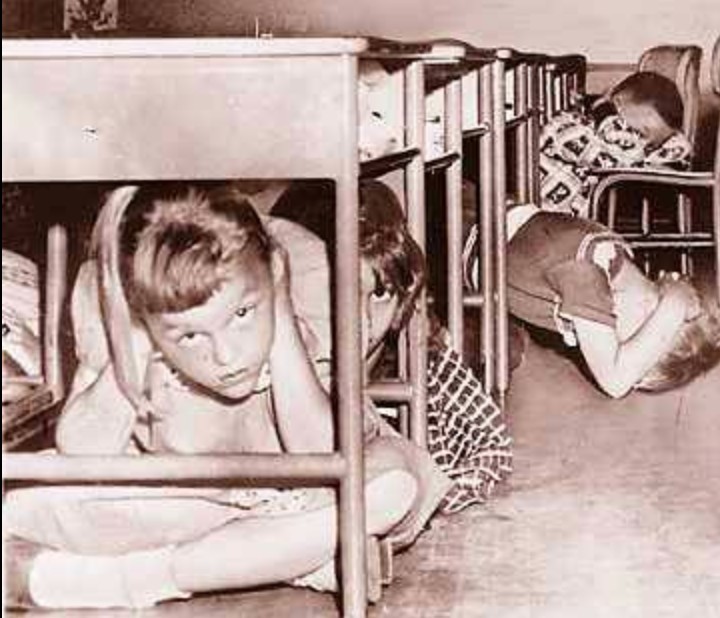 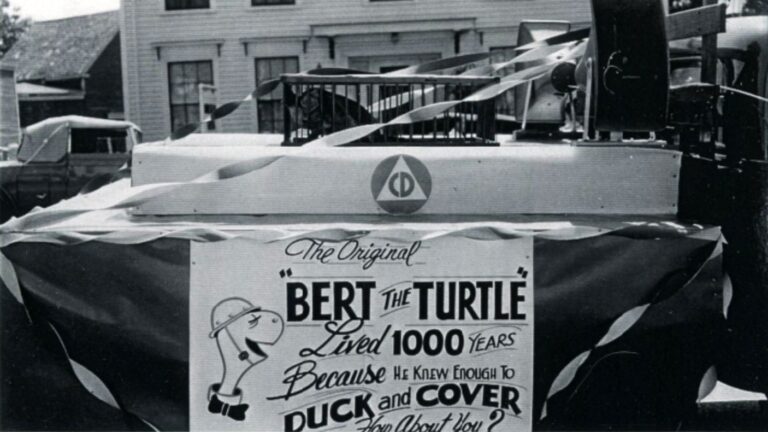 A live Bert, a 50-pound North African sea turtle, appeared on a float at the Rockland Seafood Festival in the late 1950s. 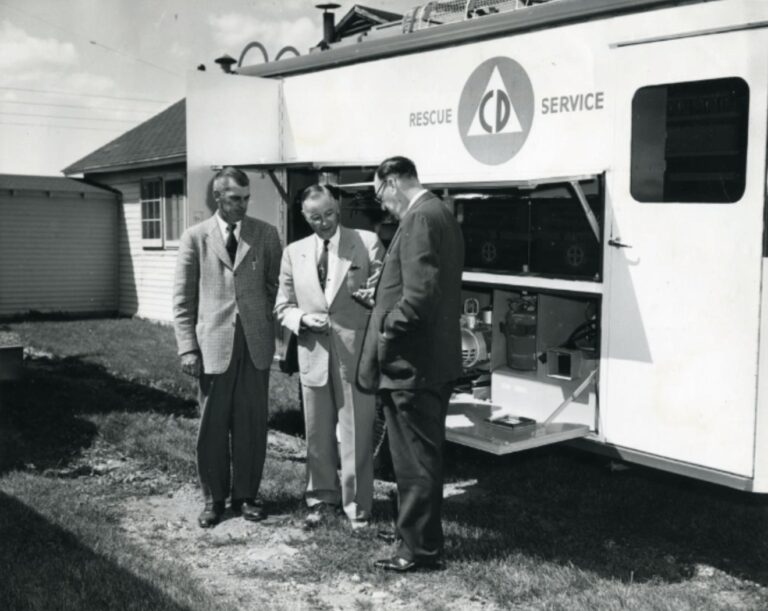