You probably learned about Prohibition in your Junior High history class. It lasted from 1920-1933, was ushered in with the 18th Amendment, and mercifully ended by the 21st Amendment. But you may not have learned that many states had passed their own temperance laws many years earlier.

Maine, in fact, became the first “dry” state when it passed anti-booze laws all the way back in 1846.

What followed was a turbulent 87 year period that saw the rise of the “dry” national temperance movement and a creative response by some Americans who disagreed. It was the era of speakeasies, bootleggers, rum runners, gun fights, bathtub gin, the mob, bribes, alcohol prescriptions, and political loopholes.

And In “wet” Bangor, a place where the locals loved their booze and brothels, the city allowed them to get away with just about anything – as long as they paid their “fine.”

There are still 56 dry towns in Maine as of 2021, which is quite remarkable. But back in the mid-1800s, political and social forces combined in an effort to portray alcohol as the cause of most of society’s problems. Neal Dow of Portland, President of the Maine Temperance Union, was twice elected Mayor of Portland on that very platform. In fact, he even (unsuccessfully) ran for President in 1880 as the nominee of the Prohibition Party. Over his two terms as Mayor of Portland, he fervently enforced the new “Maine Law” with gangs of officers raiding places and confiscating liquor. One well known event occurred in 1855 when a mob gathered outside City Hall. There was a rumor that Mayor Dow kept a huge stash of “medicinal” liquor in City Hall and that he did not practice what he preached. When the crowd got more unruly, he ordered the Maine Militia to fire on the mob killing one and wounding seven. It was war.

Up the road in Bangor, things were a little different. In the mid 1800’s, Bangor was a rip-roaring city that stood at the edge of the northern frontier – where proper society mingled with the the dirty lawlessness of the back woods. Back then, Bangor was an unapologetic lumber town, known as the “Lumber capital of the world.” In 1870, it shipped more than 250 million board feet of timber and more than 3,000 ships docked at the waterfront. Every Spring, loggers rolled into town with the log runs on the Penobscot and sailors arrived on boats to take the cut boards down river.

Of course, a few gentlemen got rich off this thriving industry. Bangor quickly became full of merchants and lumber barons and the high brow society they mingled in. They spent afternoons playing cards at the exclusive Tarratine Club and evenings dressing up in their finest to attend functions and dinners at fine hotels and venues like Norumbega Hall.

It was also quite full of sailors and lumberjacks looking for a good time. They poured into the city – lonely, flush with cash, and ready for a little debauchery. It was like a stereotypical Wild West town and the local authorities dealt with it quite differently than their crusading Portland counterparts.

Even though the state was in the middle of Prohibition, and there were plenty of locals who sided with Neal Dow, Bangor decided to enforce the rules in their own way. While they certainly did shut down some operations and seized large amounts of liquor (which they often just took home), they also allowed hotels, restaurants and saloons to go to court twice a year and pay a “fine” – which allowed them to openly and freely sell beer, wine and spirits on their premises. It’s said that the accumulated “taxes” they brought in paid for the entire cost of the county courthouse.

This became known as the “Bangor Plan” and because of it, the number of saloons in Bangor exploded from 11 in 1871 to over 140 by 1904 – serving a population of just 4,000. During that same 30 year period, public drunkenness accounted for more than half of annual arrests. Correlation? Perhaps. When asked about how the prohibition laws worked in Bangor, Neal Dow replied:

“I do not know anything good about Bangor.”

The Bangor Plan even allowed the full scale public distribution of liquor to occur – if you followed the rules. Whiskey men like John Burns created very successful businesses bottling and distributing whiskey and rye all over the city. Burns’ advertisements hung in every saloon in the city.

It wasn’t just saloons and liquor salesmen that profited off these willing pleasure seekers. Gambling houses and brothels popped up in droves to better serve the vices of the men. Street fights and violence kept the police busy and that section of Bangor became known as “Hell’s Half Acre.”

Carry Nation Comes to Bangor – and is Shown the Exit

Even the famous prohibitionist Carry Nation paid Bangor a visit. Carry was known all over for her bible thumping and violent antics. She travelled throughout the country preaching about temperance and smashing speakeasies with her ubiquitous hatchet – collecting appearance fees along the way.

In 1902, she was invited to Bangor by some “dry” folks and she checked into the Bangor House. The Bangor House was Maine’s largest hotel and was known both for its stately rooms and for its restaurant that freely served alcohol. As the story goes, after checking in, Carry went downstairs to the restaurant, was offered a drink, and then threw a theatrical (planned) fit. The hotel responded by kicking her out of the hotel and handing her to the police who escorted her out of town. The Bangor Plan paid off.

In the middle of this, a woman named Fan Jones opened a brothel in the early 1850s. She named it the “Sky-Blue House of Pleasure” and she ran it out of 233 Harlow Street for over 50 years. A well-liked prostitute from Brooksville, Maine, Fan became a shrewd businesswoman and her brothel outlasted them all. She located the Blue House just outside Hell’s Half Acre but still within walking distance of the bars, boats and train station.

Legend has it that she painted the chimneys sky blue so that the drunken sailors and woodsmen could find her house as they stumbled through the night with their snoots full of Bangor Plan liquor.

Fan employed eight or so “experienced” madams who dressed impeccably in the latest fashions. She treated them and all of her clients well. She earned enough money to buy the house outright for $4,000 in cash in 1867.

Supposedly, her clients loved the services she provided so much that they wrote songs about her.

“Fan Jones, She ran a cathouse
Way down on Harlow Street
If you’re a woodsman
Head straight there
And your friends you’ll surely meet.”

Once a year, she and her ladies dressed in lavish Parisian gowns and they rode in a horse-drawn carriage in the parade that opened the Bangor State Fair. She then set up a mobile version of the Blue House in a large tent near the fair for a week.

She may have been successful and probably paid her fair share to the Bangor Plan, but she didn’t manage to completely keep out of trouble. She was fined many times for selling alcohol and arrested multiple times for running the brothel. Then in 1870, she was indicted by a grand jury for her illicit activities. She fled by train but Marshals intercepted her in Fairfield and brought her back for trial.

The Great Bangor Fire of 1911 burned much of downtown, including Hell’s Half Acre. Somehow, Fan Jones’ Blue House survived the destruction. She continued to live in the house and ran the brothel until she died in 1917 of tuberculosis at the ripe age of 83. Most prostitutes of the time led horrible lives and died penniless, buried in unmarked or simple graves. But not Fan. Ever the planner, she had bought herself a large plot and a lovely stone and is buried in Mount Hope cemetery.

As the 20th century moved along, Hell’s Half Acre in Bangor quieted down a bit. On Monday morning, April 14, 1913, residents who opened their Bangor Daily News were greeted with the headline:

It seems that the county decided that Penobscot County Sheriff Wilbert Emerson wasn’t doing enough to enforce the state prohibition laws so they impeached him. His replacement and his replacement’s replacement were also impeached. The renewed effort to shut down the illegal activities did actually make a dent and many purveyors simply went out of business. The heyday of Hell’s Half Acre seemed to be in the mirror.

The End of Prohibition

Ironically, just as Bangor was getting dryer, national sentiment was changing which eventually resulted in the Federal repeal of Prohibition in 1933. Maine was very reluctant to get wet, but they caved in a year later when they saw the tax revenues that their neighbors were bringing in through the legal sales of alcohol.

If you get the chance, take one of the historic tours of the former Devil’s Half Acre given by local historian Monique Bouchard who gives the tours in the persona (and period dress) of Fan Jones. 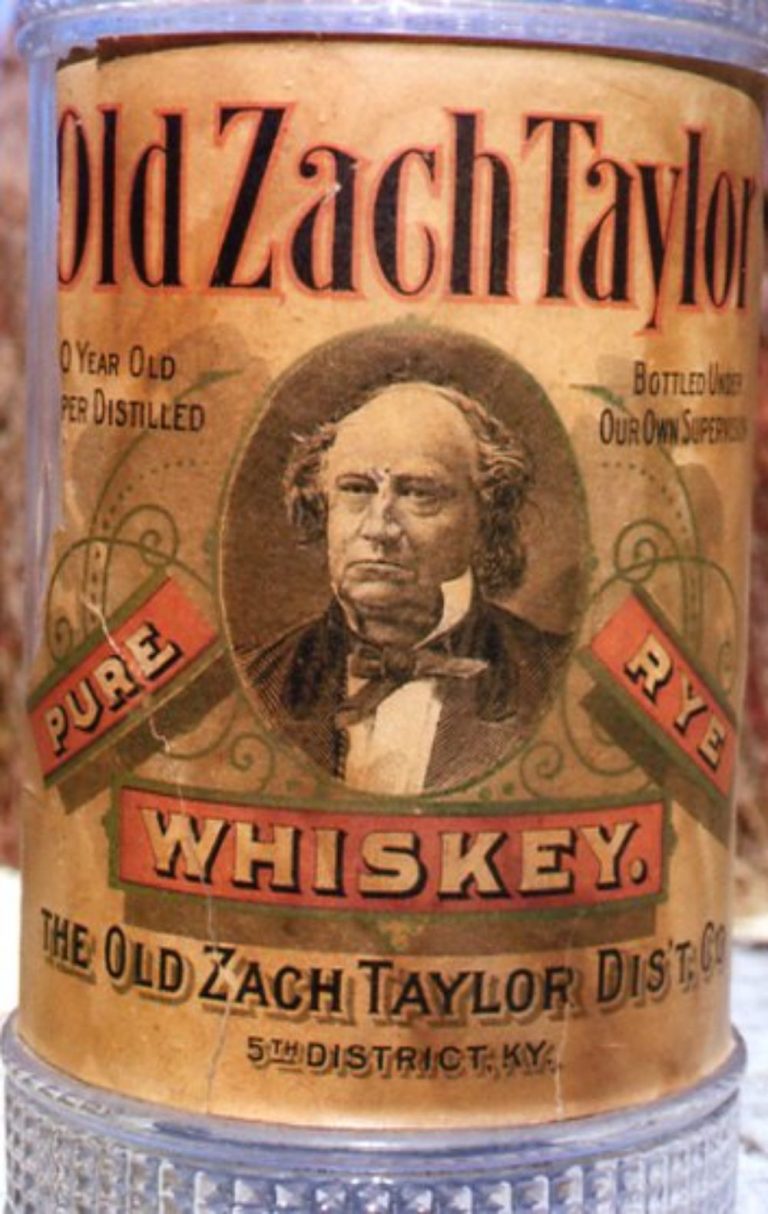 One of John Burns' whiskey bottles 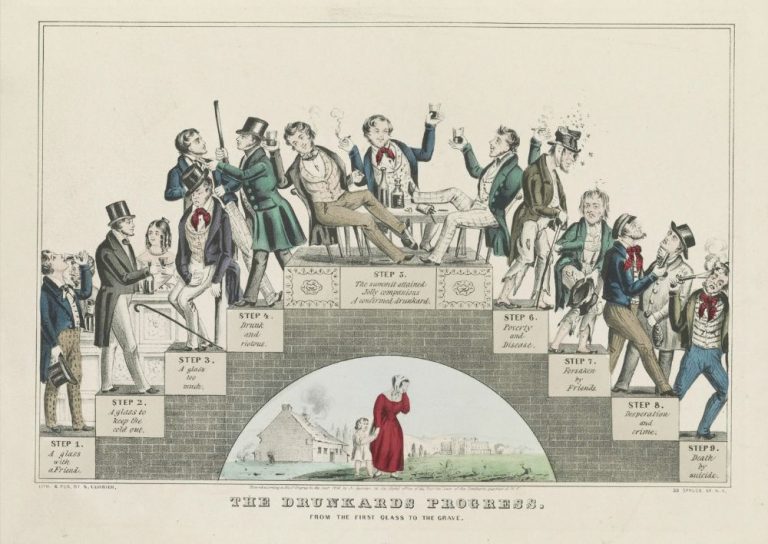 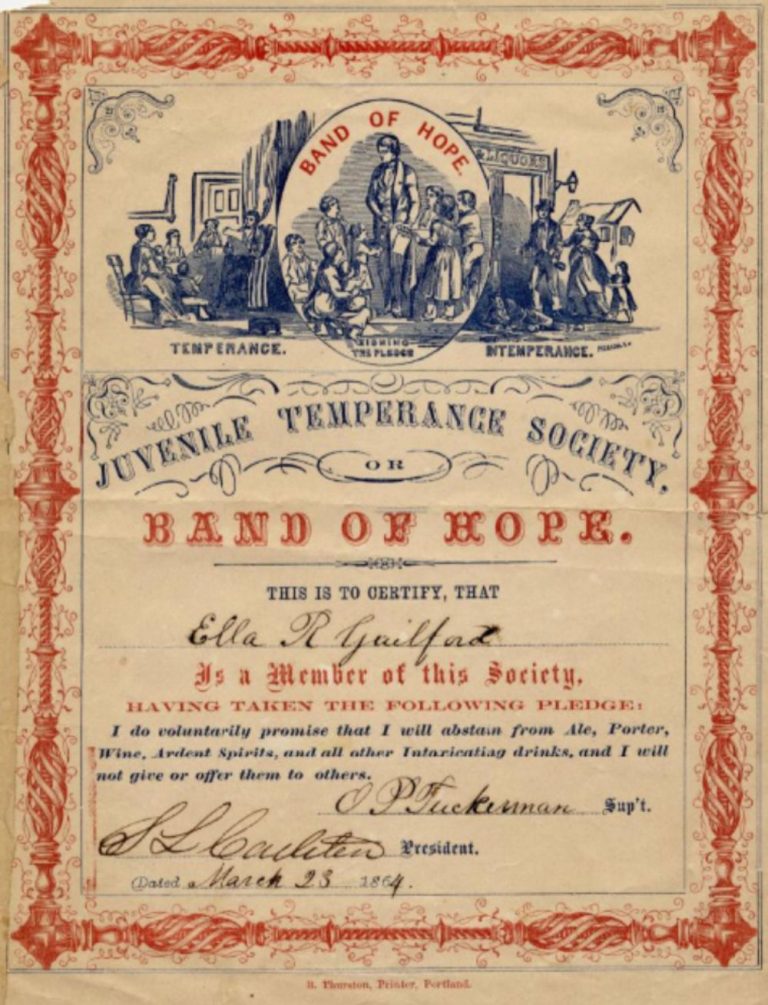 A juvenile temperance pledge from Portland, 1864, that reads: "I do voluntarily promise that I will abstain from Ale, Porter, Wine, Ardent Spirits, and all other Intoxicating drinks, and I will not give or offer them to others. 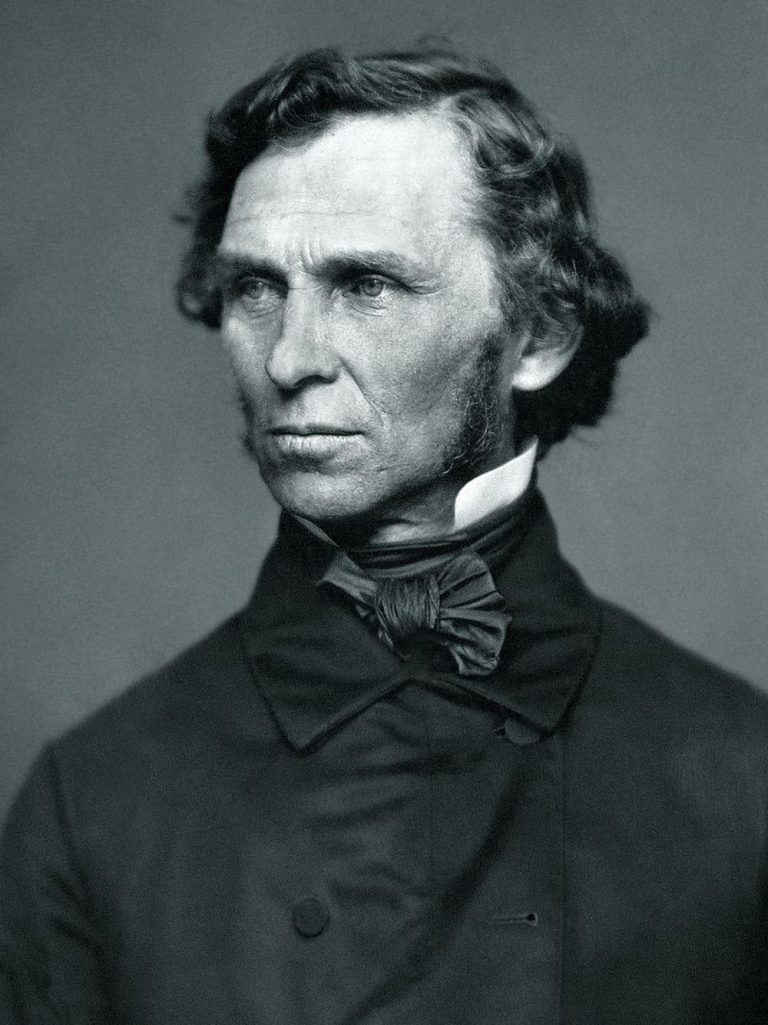 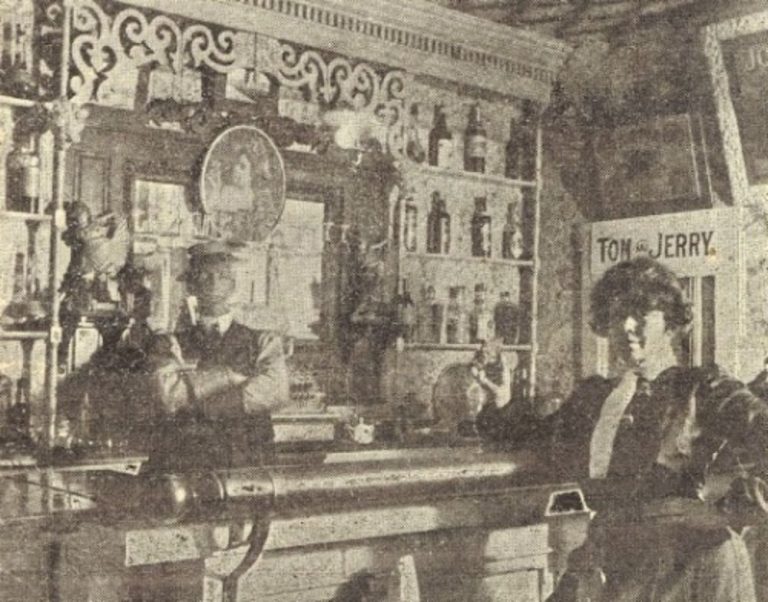 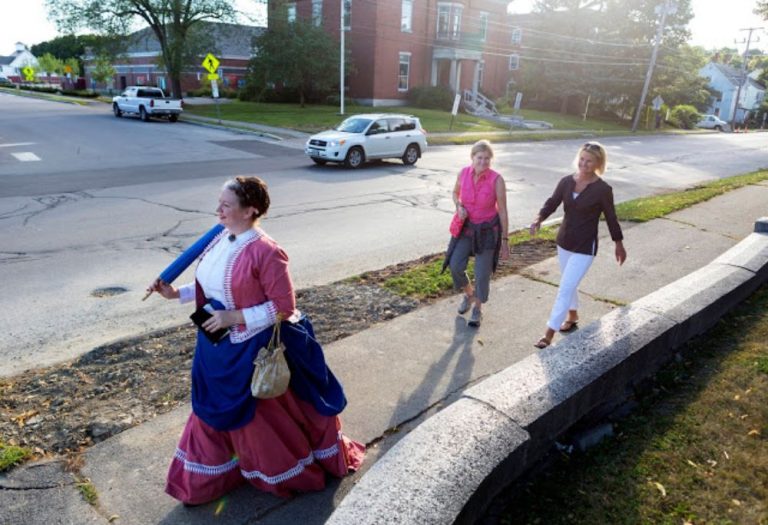 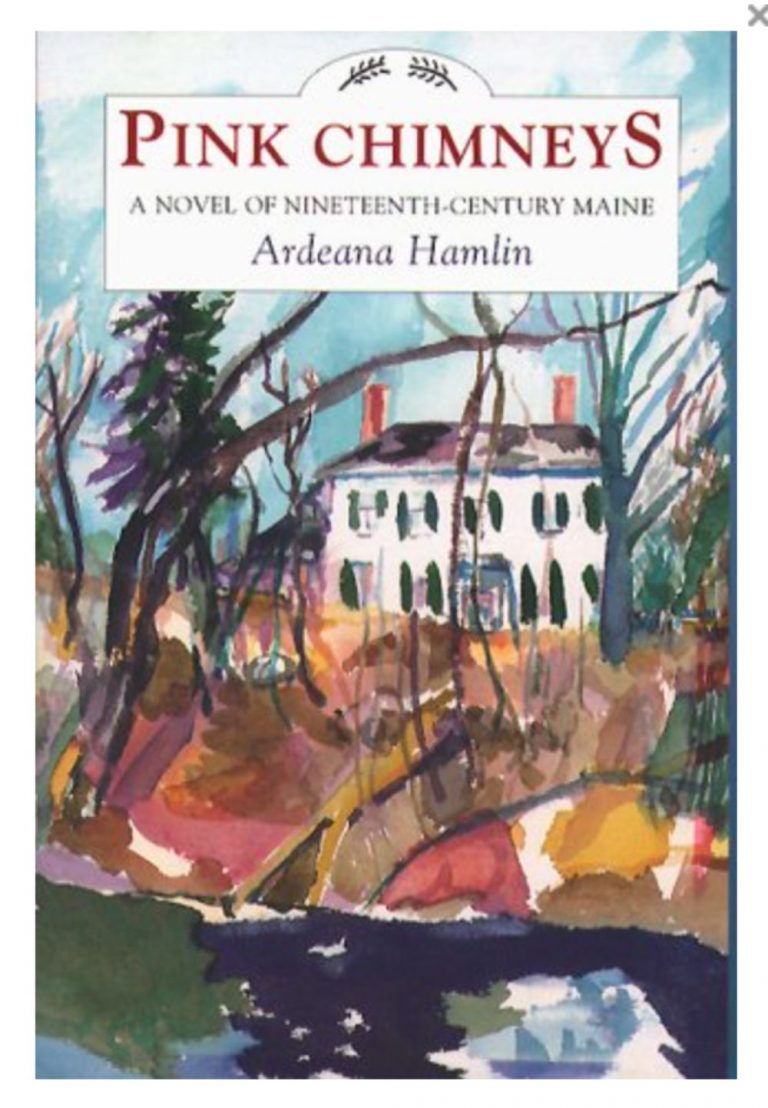 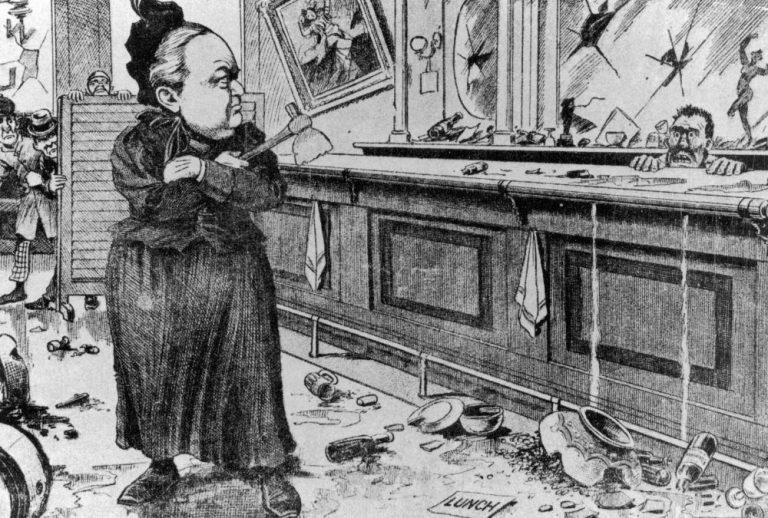 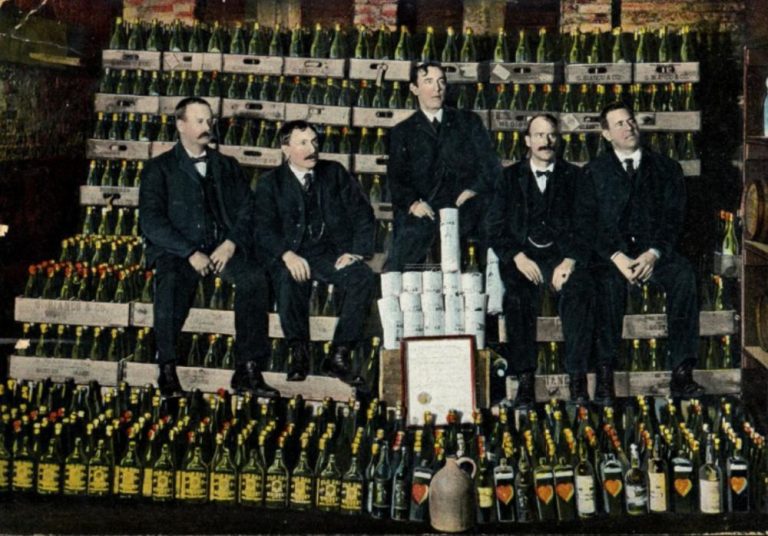 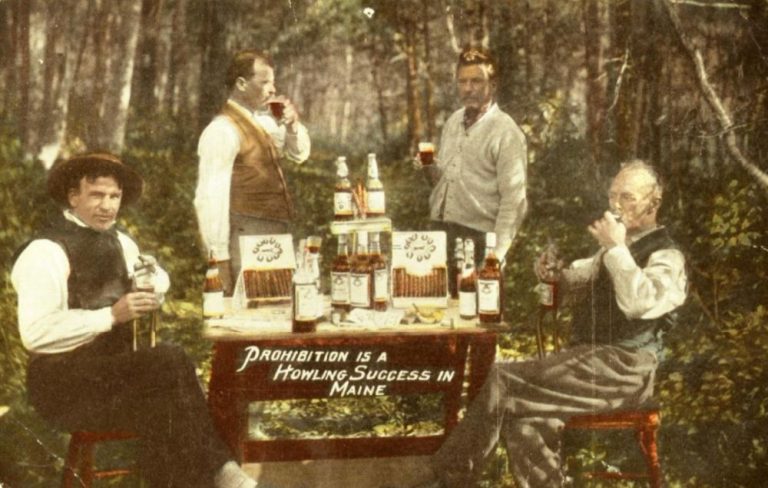 A postcard from 1930 making fun of temperance 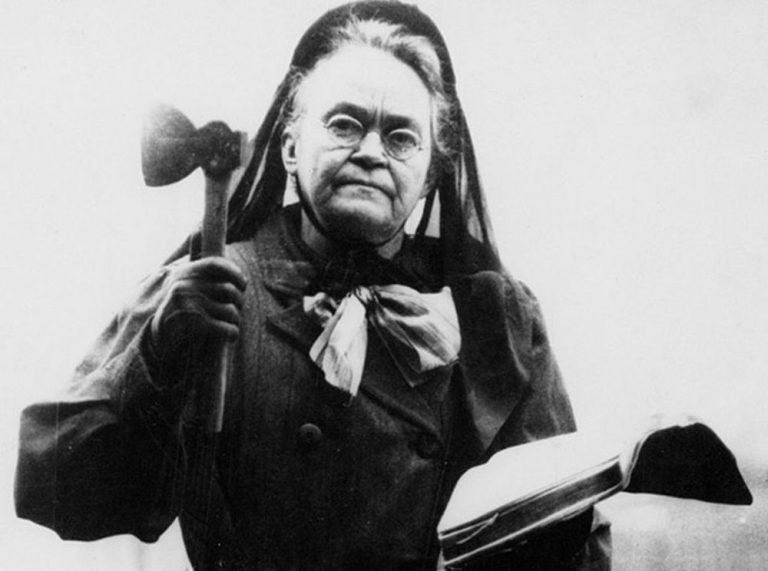 Carry Nation with her bible and hatchet 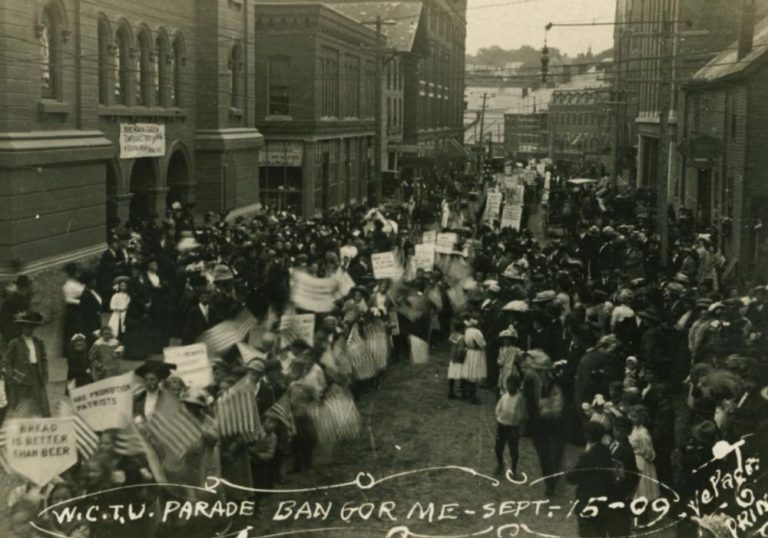 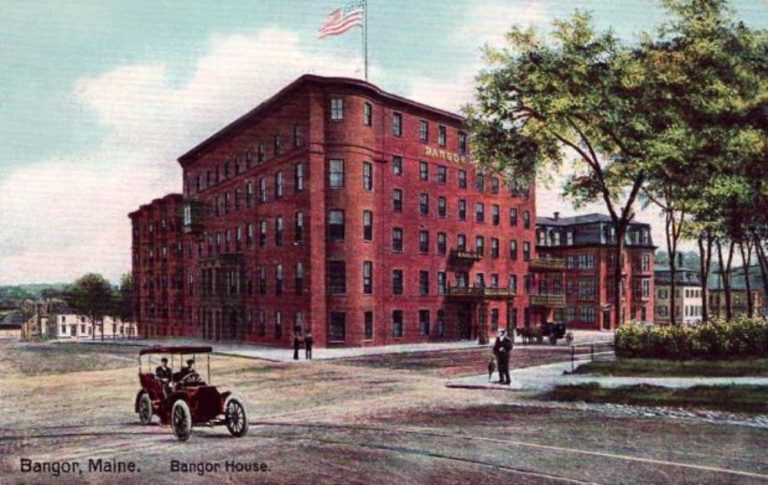 The Bangor House 1909 - Carry Nation was kicked out of here 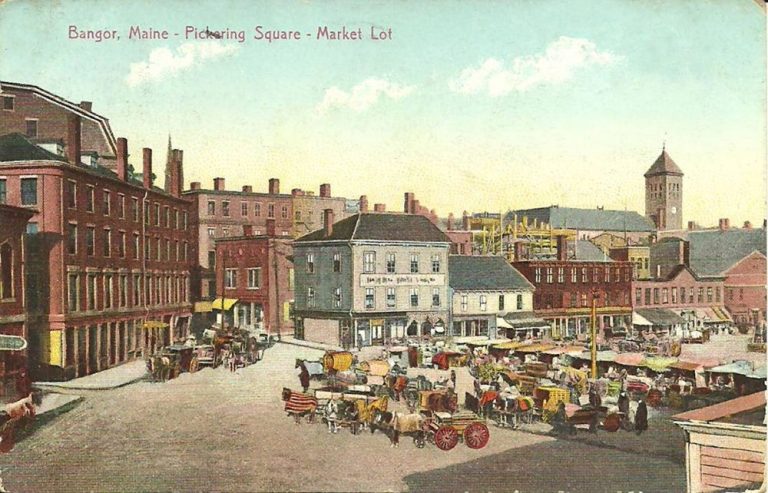 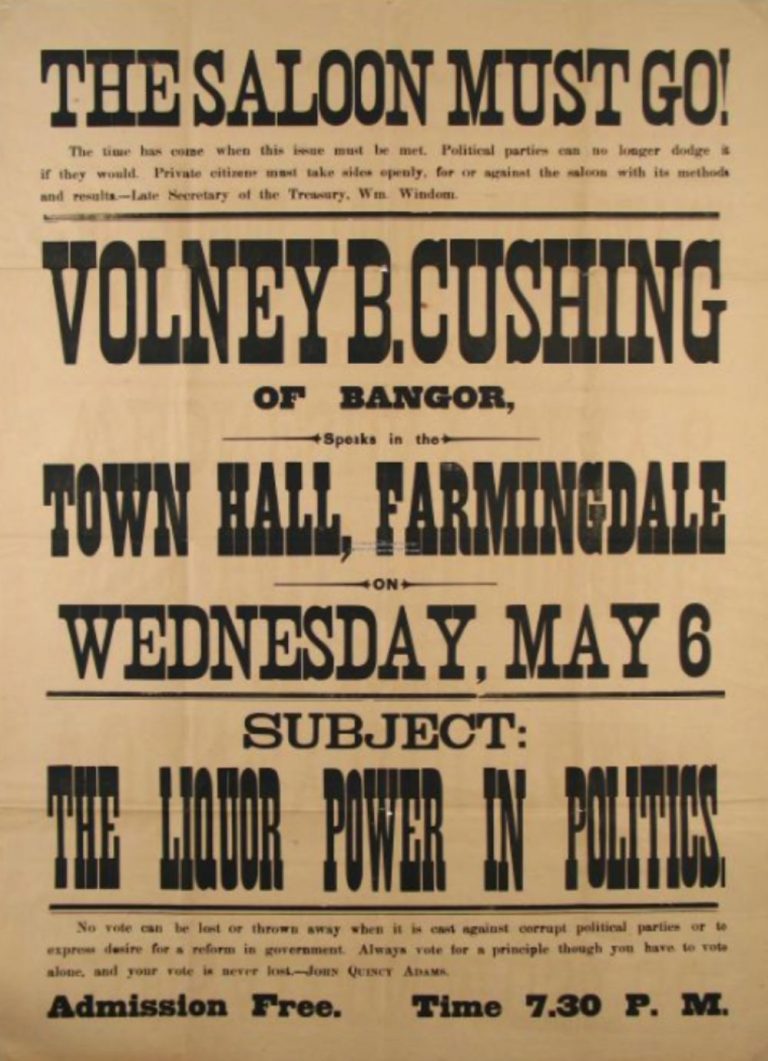 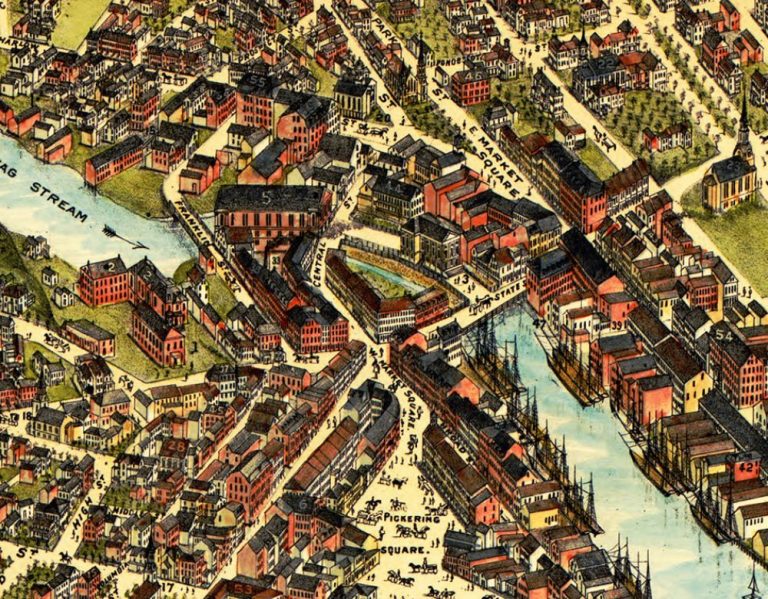