In 1783, King George III signed a peace treaty in Paris ending the Revolutionary War and granting the 13 colonies their political freedom. Besides recognizing American independence, the treaty established boundaries for the new country. America now spread from the Great Lakes to the Gulf of Mexico and West to the Mississippi River. But the northern border between Maine, Quebec and New Brunswick wasn’t clearly defined and this caused problems for the next 60 years.

At the time, the state of Maine was as a district of Massachusetts. Mainers started campaigning for independence from Massachusetts as early as 1785, and statehood was put to the popular vote six times between 1792 to 1819.

Why? Mainers had been increasingly unhappy with taxation, the reduced price of Maine lumber by Massachusetts law and under-representation in Massachusetts government.  The breaking point was that during the War of 1812, Massachusetts did little to protect Maine from marauding by the British.  In 1819, after 4 years of aggressive lobbying by Maine, the Massachusetts General Court finally passed a statehood bill.  This required ratification by U.S. Congress and the President, but it got held up in the fight over slavery. After a lot of negotiation, Maine became a state in 1820 as part of the Missouri Compromise, formally separating from Massachusetts (with Missouri being admitted as a slave state).

Massachusetts had been issuing land grants in parts of Maine that the British claimed ownership. Meanwhile, Acadians had already settled in and around the St. John and Madawaska rivers. Americans and British families, along with timber operations, moved in as well. The British wanted to secure the disputed land, not just because of the valuable timber and rich river valley soil, but because it would allow for a year-round route from the East to Quebec (known as the Grand Communications Route) which was the only way to get communications from Europe to the rest of Canada.

In 1830, during a meeting in Madawaska related to the upcoming U.S. Census, the New Brunswick militia barged in and arrested some of the residents while others fled into the woods.

Residents asked Maine for help and, following the guidelines from the Treaty of Ghent, they appointed a neutral commission (which included King William I of the Netherlands) to decide on the border. The commission made a recommendation but Maine rejected it. The British countered with another boundary proposal in 1835 but Maine rejected that one as well. Then in 1836, the Governor of New Brunswick had a Maine census taker arrested and announced that they would take military action if the settlement attempts continued.

In response, the Governor of Maine issued an order announcing that New Brunswick had invaded Maine.

Funds were authorized both by the federal government and Maine to fortify the Maine defenses. Tensions were high.

The Battle of Caribou

Then, during the winter of 1838, lumberjacks from both sides, who were arguing over the harvesting of valuable timber around the Aroostook River near Caribou, started carrying weapons. On December 29, 1838, locals spotted New Brunswick lumberjacks taking trees from land that had previously belonged to Willam Eaton (see below). The armed lumberjacks, along with some local militia, were dispatched to the property to put a stop to the forestry activities. Tensions were high, guns were drawn and battle was about to occur.

They fired at the bear and killed it after 2 of the lumberjacks were badly wounded. The Americans, thinking the Canadians had fired on them, opened fire in their direction. The Canadians with their wounded fled. No one, other than the bear, was injured by gunfire. This incident became known as the Battle of Caribou, part of the Aroostook War – which was also called the Pork and Beans War (supposedly named because that was the diet of the armed lumberjacks).

Captain Andrew Talcott was sent with a survey team to map the border area. Colored drawings from that trip are in the National Archives and some are in the gallery below. From a DownEast magazine article in June 1995: “Artists accompanied the survey and used an apparatus called a camera lucida. Suspended over a sheet of drawing paper, the camera lucida, by means of a prism, projected an exact outline of a particular view onto the paper, which could then be traced. Later, the line drawings were embellished with watercolor.”

His drawings provide a wonderful view of the Northern landscape.

Side Trip: Who Was William Eaton?

Here comes a little side story. The armed lumberjack skirmish and the bear mauling occurred on land that had belonged to a William Eaton. William Eaton, deceased by the time of the Battle of Caribou, was a former U.S. Army officer who was best known for his role in the First Barbary War (1801-1805).

Merchant ships were under constant attack by pirates from the Barbary Coast (which was the North African Ottoman area including Tripoli, Algiers and Tunis). The European nations paid bribes to the Barbary states to keep them at bay and the U.S. had been following suit. William Eaton, the Consul at Tunis, thought the U.S. should cease payments and use the military against the Berbers. He then got embroiled in a plot to restore the deposed Pasha of Tunis to strengthen the U.S. presence in the area, but it backfired and Tripoli declared war on the U.S. (and Eaton fled back to the U.S).

He returned a few years later, this time a Navy lieutenant, to try a 2nd time to restore the Pasha. He personally fronted the funds for a military mission to attack the city of Derna. He led a 50 day, 521 mile forced march of Marines and mercenaries across the desert from Alexandria. They arrived exhausted and out of supplies but ready for action. With heavy gun support from offshore Naval ships, they attacked the walled city. The operation was a success and the forces successfully took the city of Derna with a few losses. Eaton was wounded in the process.

While Eaton wanted to keep the party going and march on Tripoli, unbeknownst to him, the U.S. was completing a side deal to buy back some hostages that had been previously taken. Eaton was told to release Derna and return to America. When he returned, he was far from happy. Though he was treated as a war hero, he felt that he hadn’t gotten support from Washington while overseas, that they had negotiated behind his back denying him further glory, and that he was owed the funds that he had fronted for the invasion of Derna. Ultimately, he wasn’t repaid, but was given 10,000 acres in Maine in 1806. Which is where the Battle of Caribou occurred 32 years later.

The phrase “to the shores of Tripoli,” from the official U.S. Marine Corps hymn refers to the Battle of Derna.

Another fun fact is that Eaton became a key witness in the 1807 treason of Aaron Burr (post Hamilton duel, pre Broadway musical). Eaton claimed that Burr had tried to recruit him to help invade Spanish territory in the Southwest and create an independent state run by Burr. Eaton also claimed that Burr was plotting to assassinate the President and overthrow the government.

Burr was ultimately acquitted and Eaton was accused by his enemies of being paid for his testimony. Eaton moved back to his native western Massachusetts and lived out the rest of his life as a gout-ridden alcoholic, heavily in debt with gambling debts. It’s not clear how much time he spent on his Maine land.

Back to the Battle in Maine: The Aroostook War

The Battle of Caribou led to the further deployment of forces from both sides. There were reports of New Brunswick, British and Mohawk forces gathering near the St. John River. In response, Maine increased the militia and successfully lobbied the U.S. Congress to authorize troops and funds. Fort Fairfield and Fort Kent were constructed while the British and New Brunswick troops were increased to guard tributaries to the St. John River.

Nobody wanted another war, but something needed to be done.

Finally, after much research and debate, Secretary of State Daniel Webster and Alexander Baring, also known as 1st Baron Ashburton, reached a compromise in 1842 and the Webster–Ashburton Treaty was signed in Washington. It split the disputed Maine area and set the current borders (mostly following the St. John River border). In total, the treaty gave 7,015 square miles to the United States and 5,012 to Great Britain. In addition to settling the Maine border dispute, it also clarified the border with New Hampshire, Michigan and Minnesota along with a few other items including establishing a joint naval system for suppressing the slave trade off the African coast.

The treaty, while a diplomatic success, was not well received in America. To bolster his public relations issue, Webster produced one of the famous “Mitchell maps” that had a red line, supposedly drawn by Benjamin Franklin himself in the 1700s, that showed the border mostly matching what the Webster-Ashburton Treaty had settled on. It was rumored to be a fake.

We are marching on to Madawask,
To fight the trespassers;
We’ll teach the British how to walk
And come off conquerors.

We’ll have our land, right good and clear,
For all the English say;
They shall not cut another log,
Nor stay another day.

They need not think to have our land,
We Yankees can fight well;
We’ve whipped them twice most manfully,
As every child can tell.

And if the tyrants say one word,
A third time we will show,
How high the Yankee spirit runs,
And what our guns can do.

They better much all stay at home,
And mind their business there;
The way we treated them before,
Made all the nations stare.

Come on! Brace fellows, one and all!
The Red-Coats ne’er shall say,
We Yankees, feared to meet them armed,
So gave our land away.

We’ll feed them well with ball and shot.
We’ll cut these red-coats down,
Before we yield to them an inch
Or title of our ground.

Onward! My lands so brave and true
Our country’s right demands
With justice, and with glory fight,
For these Aroostook lands! 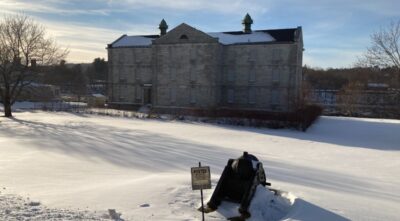 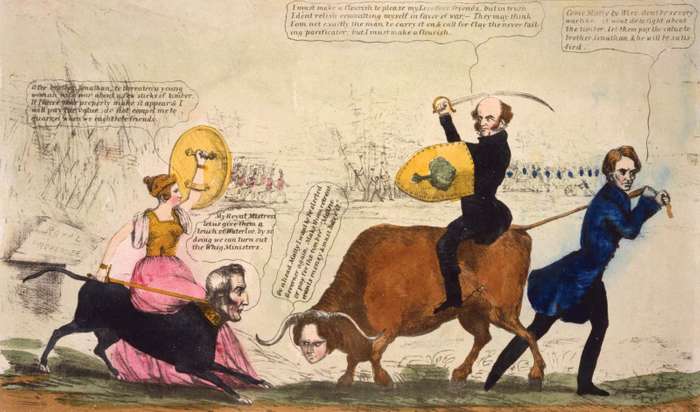 Satirical cartoon about the escalation of tensions between the United States and the British Commonwealth during the Aroostook War. U.S. Pres. Martin Van Buren, atop an ox with the head of Maine Gov. John Fairfield, confronts England's Queen Victoria, who is riding a dog with the head of the duke of Wellington. The ox's tail is pulled by Virginia congressman Henry A. Wise. - Library of Congress, Washington, D.C. 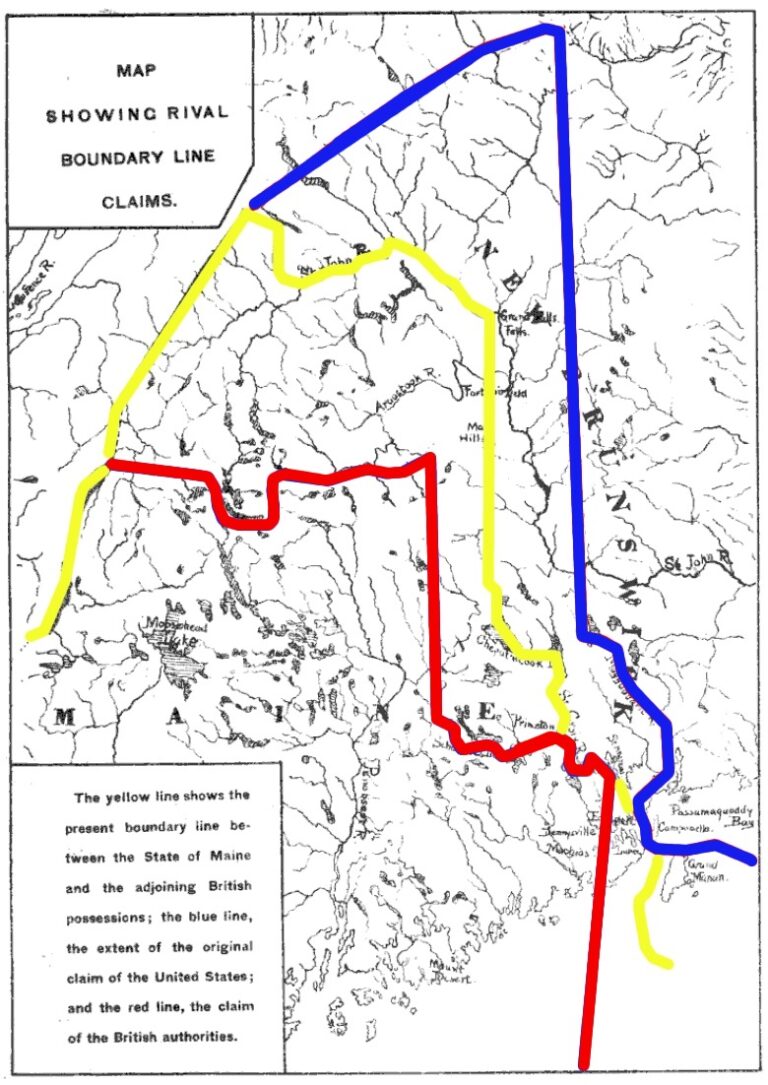 The disputed boundary - British said red, Americans said blue and the yellow is what was settled on 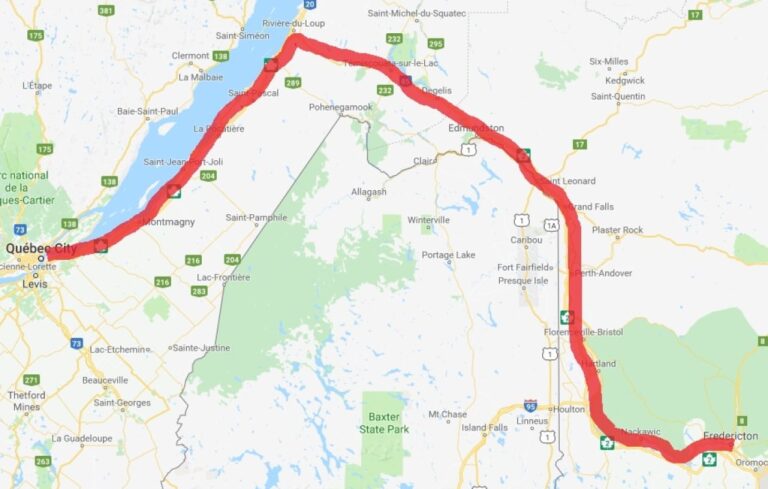 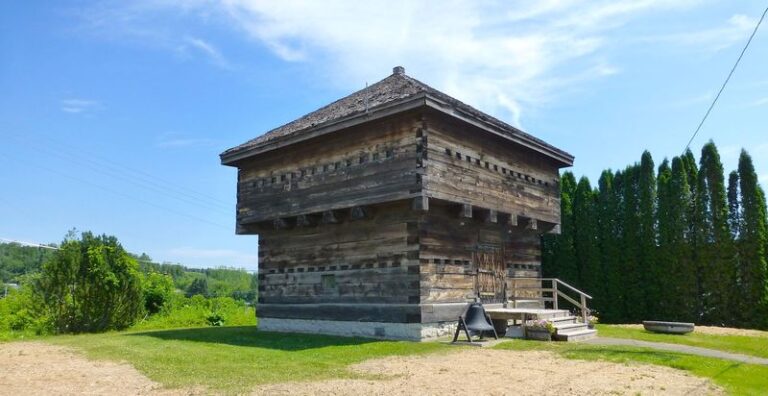 Replica of the blockhouse at Fort Fairfield
Eyewitness map of American and British forces along the St. John River from mainememory.net 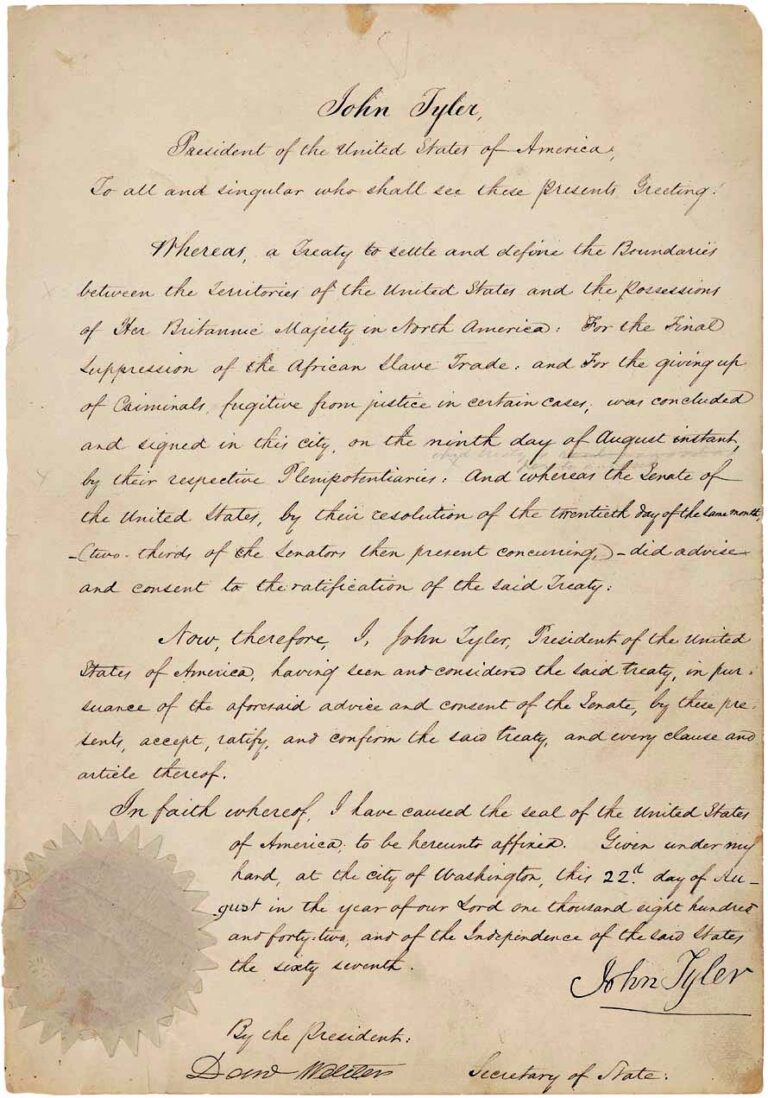 The Webster-Ashburton Treaty that finally settled the northern Maine boundary with Canada. 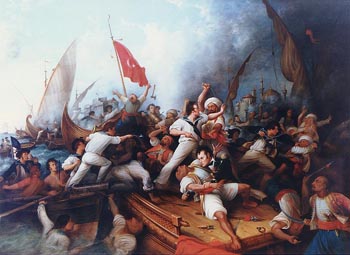 Painting of the Barbary War 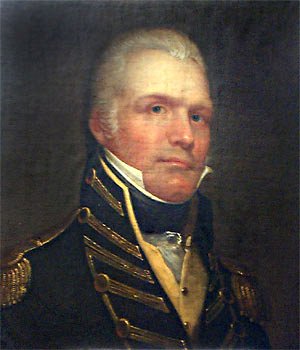 William Eaton who owned the land where the Battle of Caribou occurred. 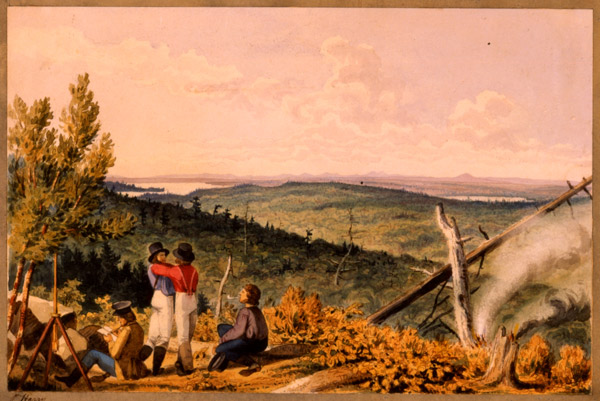 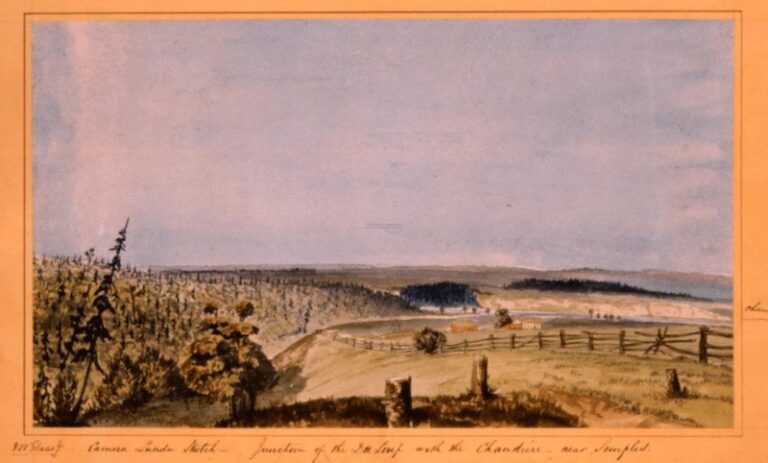 Another from the Talcott survey. This of Rivere-du-loup in what is now Quebec 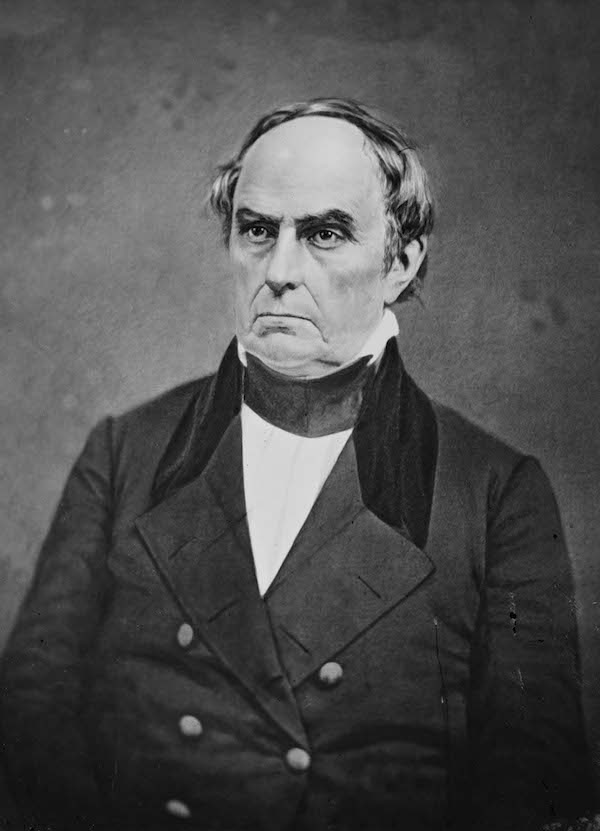 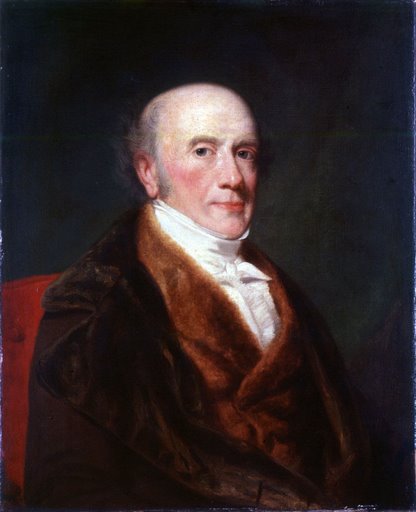